Some news and events

Mari Pepa de Chamberí wanted to leave you a message to wish you a very merry Christmas and a prosperous year 2022 full of joys and above all, HEALTH … It is so important!

MARI PEPA with  her  show “De la Mancha a Hollywood” brought  to  the  public  of Arenas de San Pedro the memory of SARA MONTIEL, with a tribute in which she performed the most popular songs of the  great diva and fragments of some of her films were viewed. 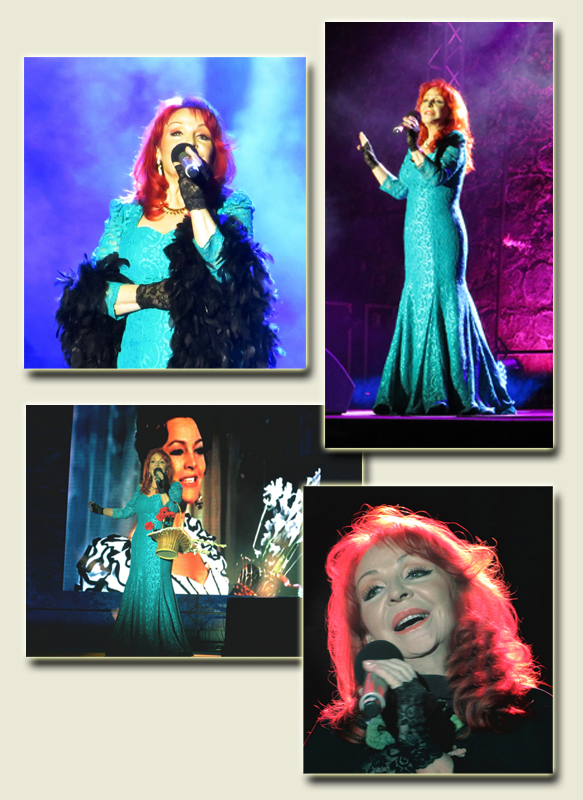 An  enthusiastic  audience  accompanied  Mari Pepa with  their  voices,  singing with her the best-known refrains  of  the repertoire by Sara Montiel. 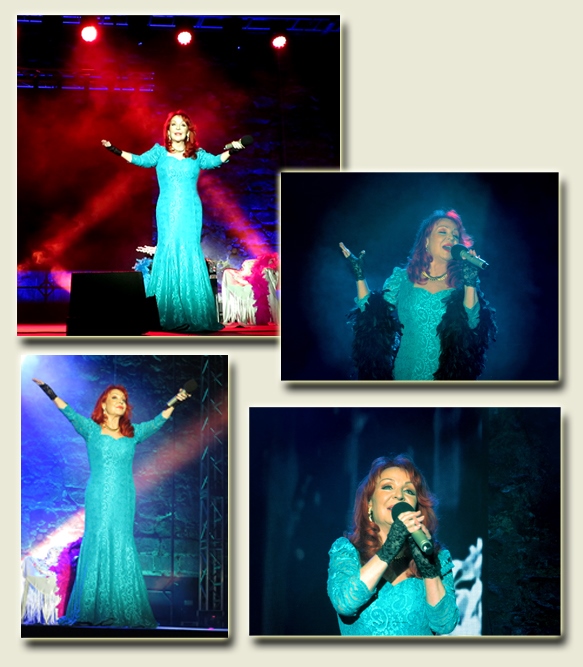 At 1:00 p.m. The high mass began in the parish of La Paloma, officiated by the Cardinal Bishop of Madrid, Carlos Osoro and with the presence of the ecclesiastical and political authorities, as well as all the public allowed by the covid regulations, while crowds of people followed the act at the gates of the church.

The event was broadcast live on TV.

Mari Pepa, sang the Padrenuestro and Ave Maria, with music of her own. 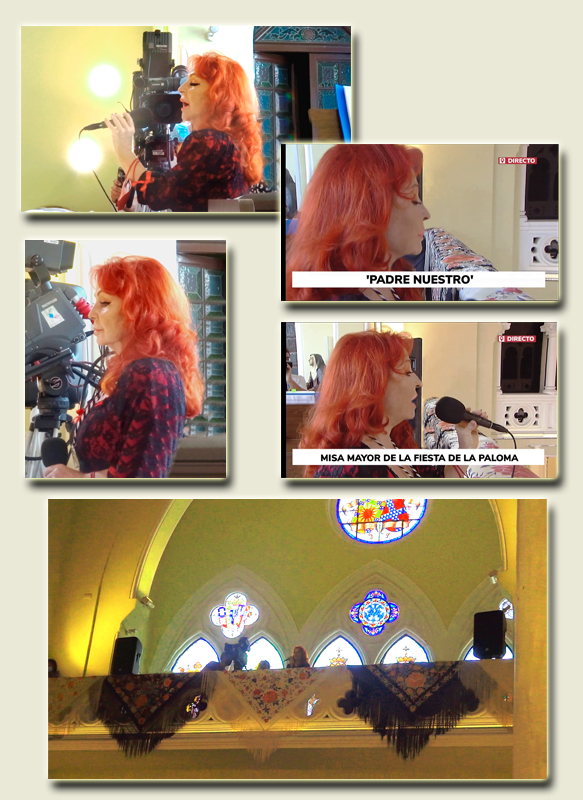 At 8 p.m. Mari Pepa interpreted a cappella, Hail to the Virgin of La Paloma before the image of the painting, an event that was broadcast live on TV and was later interviewed. 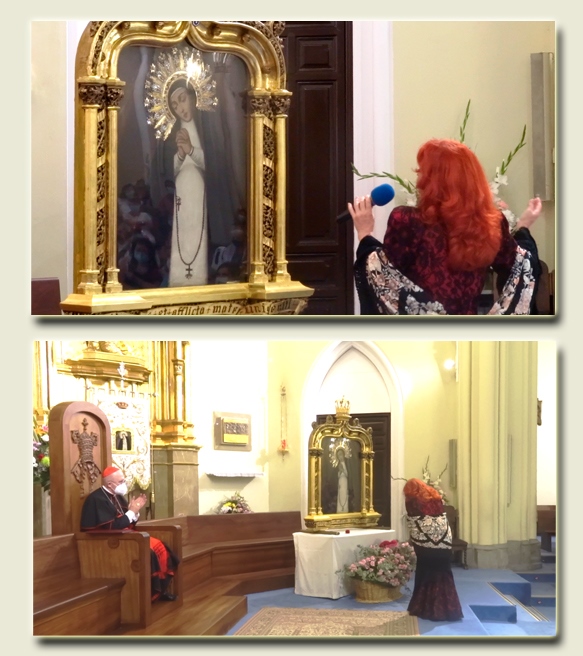 The event was broadcast on several national television channels live and she was subsequently interviewed on Telemadrid. 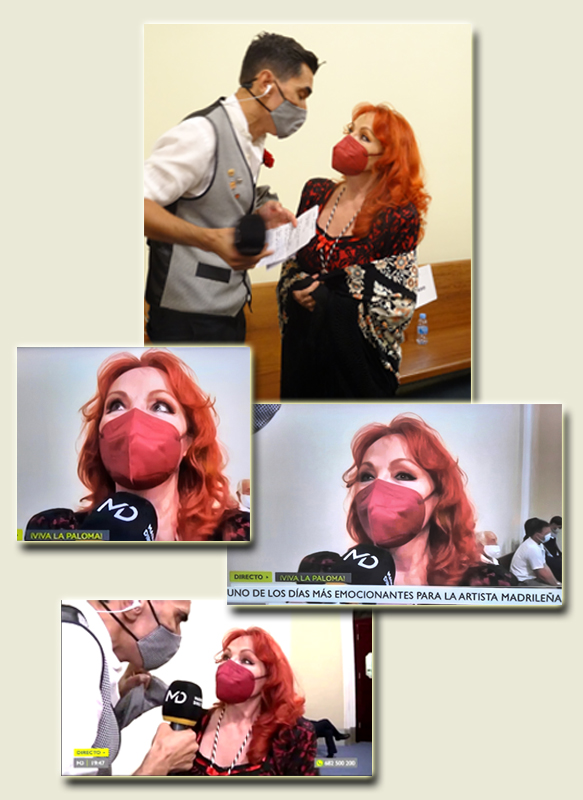 At 12 o’clock at night in the Vistillas gardens, a place with a lot of traditional Castiza, Mari Pepa put an end to the Paloma festivities, singing the salve to the Virgin before the public gathered in the enclosure. 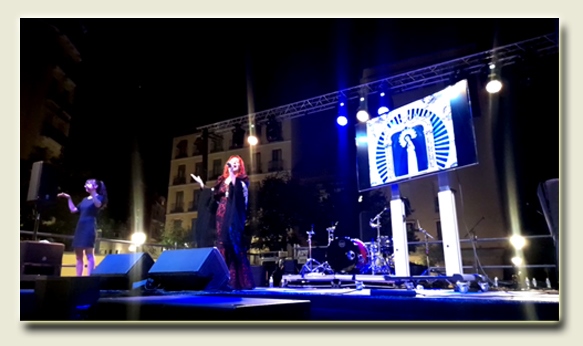 Concert of traditional music starring MARI PEPA. With his show “Viva la Paloma”, he brought Madrid’s popular music up to date, interpreting a happy and very participative repertoire, with popular themes of his own.

An excellent audience attended the event, despite the extremely high temperatures. 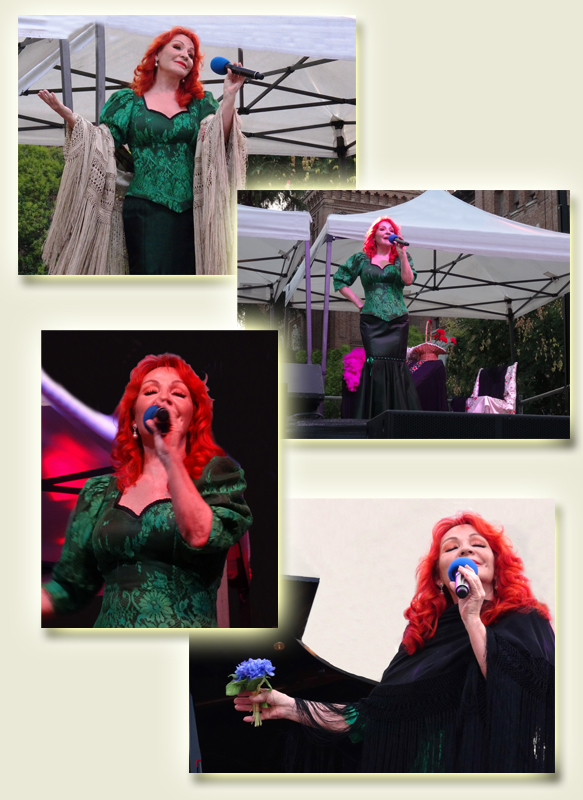 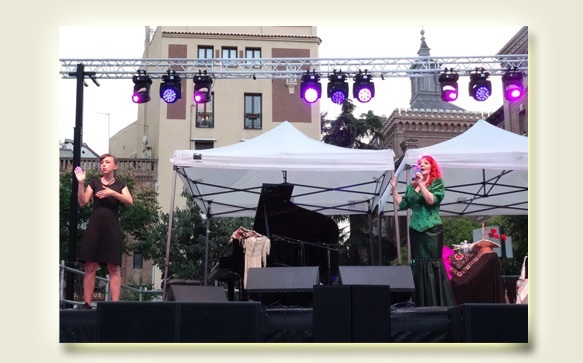 Nerea, a sign interpreter, translated some of the most popular songs from Mari Pepa’s concert.

Mari Pepa sang the songs of her authorship, in the holy Mass that the parish of La Paloma celebrated in honor of the Castizos.

The Federation of Traditional Madrid Groups and the traditional groups were present in this emotional and endearing act. 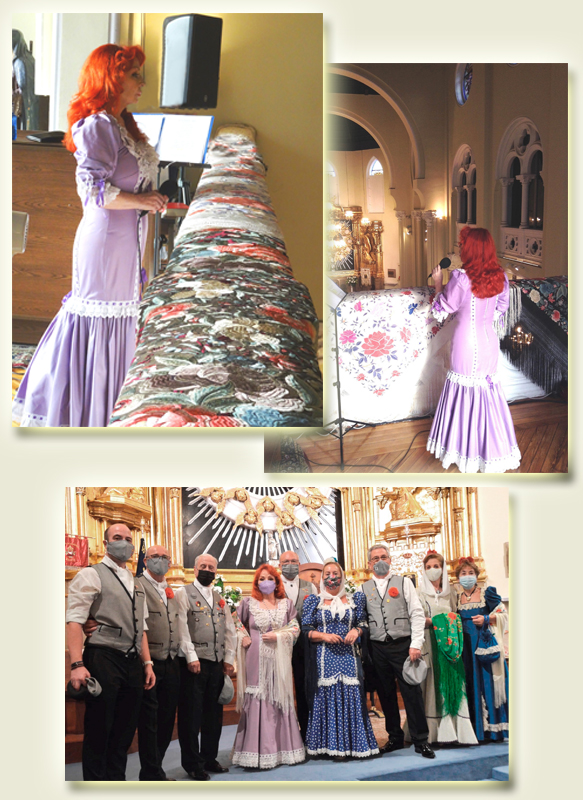 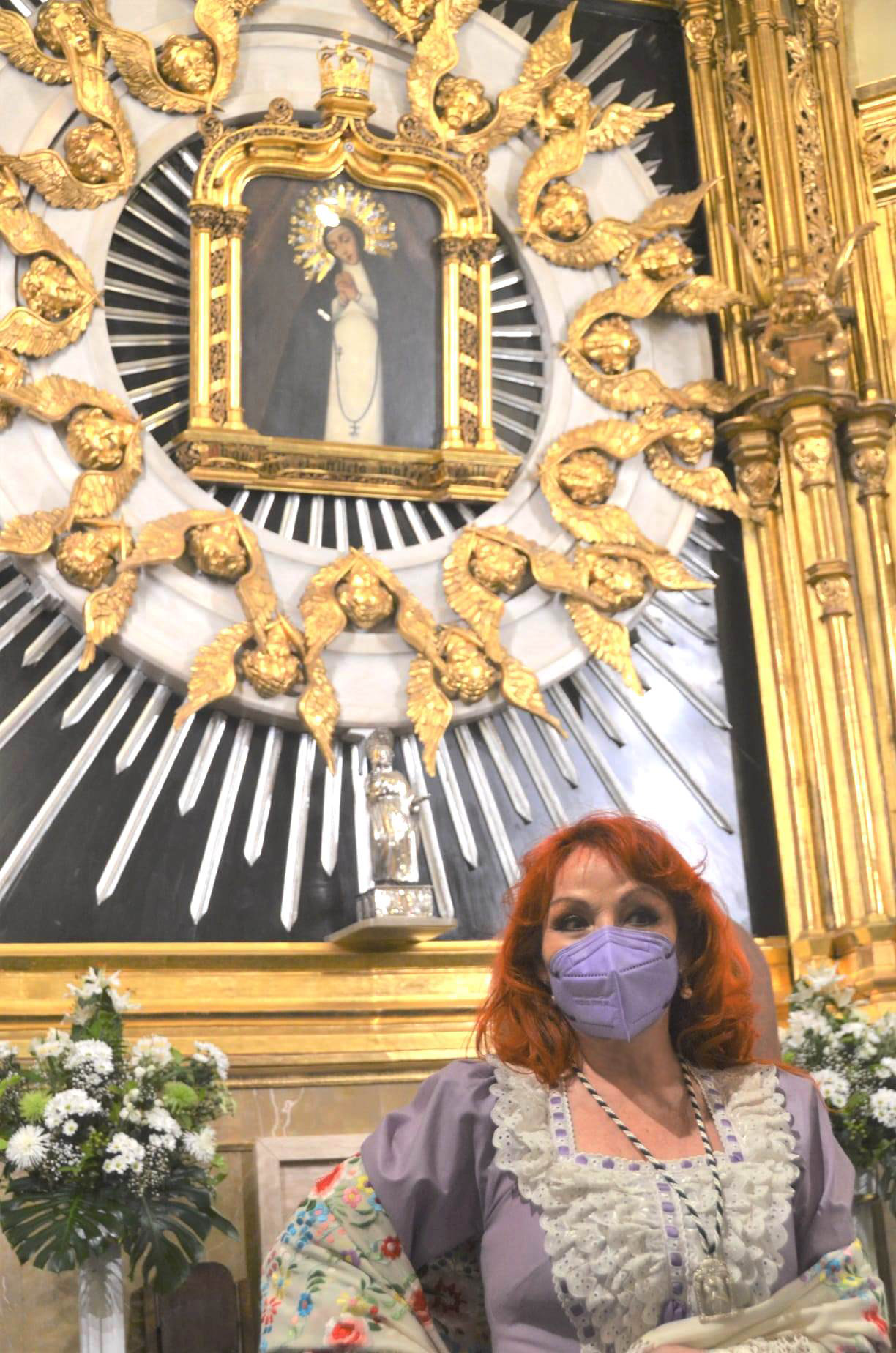 After singing the Ave Maria at mass, presided over by Cardinal Carlos Osoro, Mari Pepa took part in the inauguration ceremony of a mosaic of the Virgin of the Paloma outside the temple, singing to the popular patron of Madrid a chotis of his authorship, creating a very emotional and endearing atmosphere among the public and attending authorities. 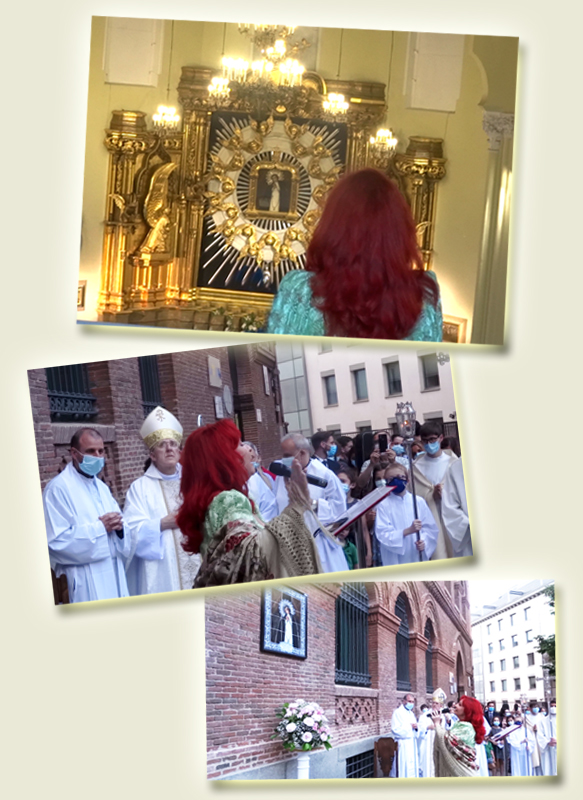 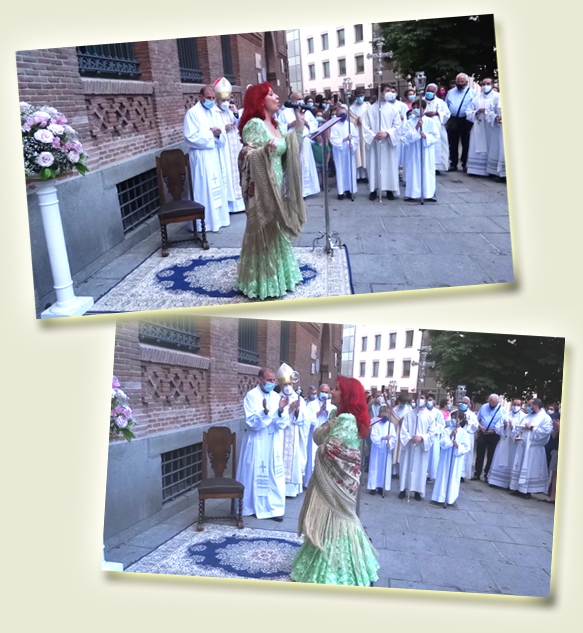 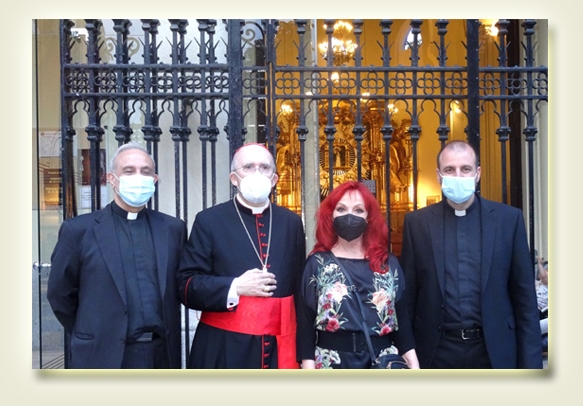 Mari Pepa with the ecclesiastical authorities of Madrid

Mari Pepa, accompanied on the piano by Miguel Tubía, offered her show «El Madrid de nuestros mayores», on a large open-air stage, in the street Real de Las Rozas, in a limited space for the event.

Esther, Lucía, Jesús and Jesús Jr. Márquez, made a masterful exhibition of chotis and pasodoble, which were highly applauded by the public.

The staging of the duo of «La del manojo de rosas», caused surprise and satisfaction in the public.

Totally full and a fantastic audience that participated singing with Mari Pepa all the popular songs that she interpreted. A great success in an unforgettable afternoon! 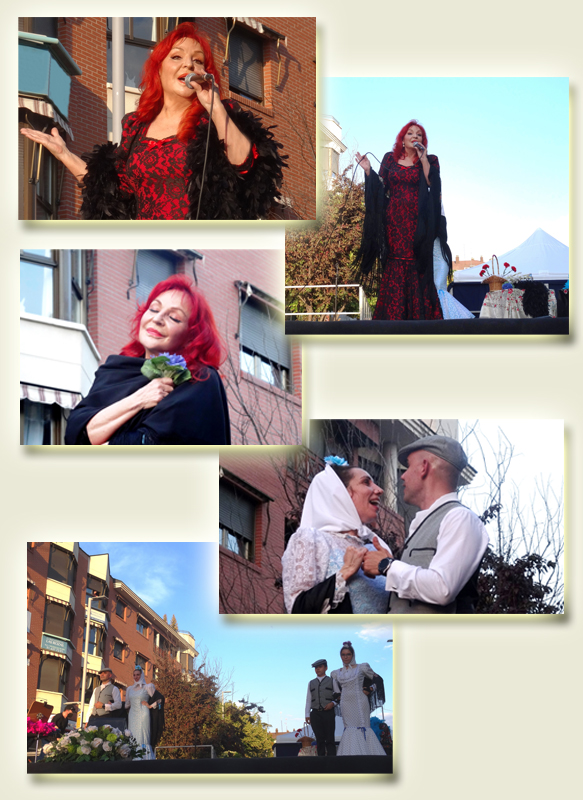 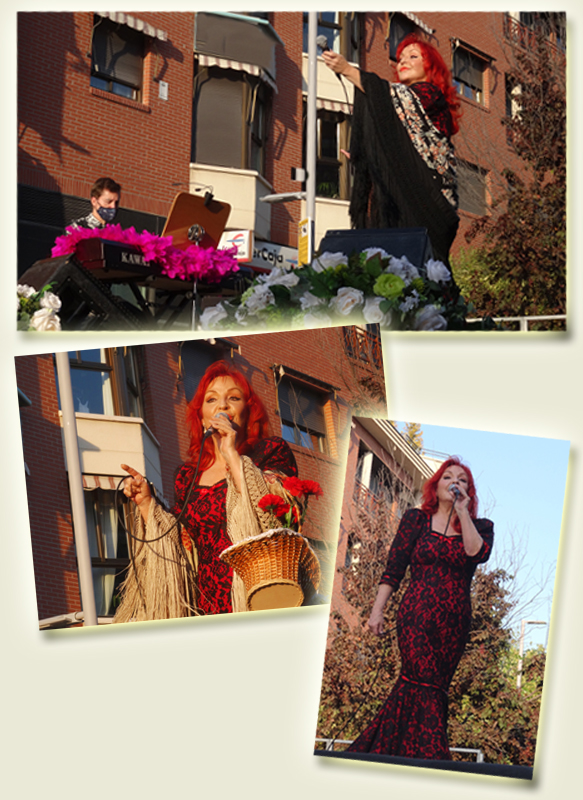 Continuing Mari Pepa’s tour of Madrid, on Saturday the 22nd she gave a concert at the C.C. San Juan Bautista.

A very beautiful room, total health care and a fantastic audience that filled the room and sang the songs with Mari Pepa with great enthusiasm.

They sang the encore they asked for, wasting joy, wanting more. Thanks for all of it. 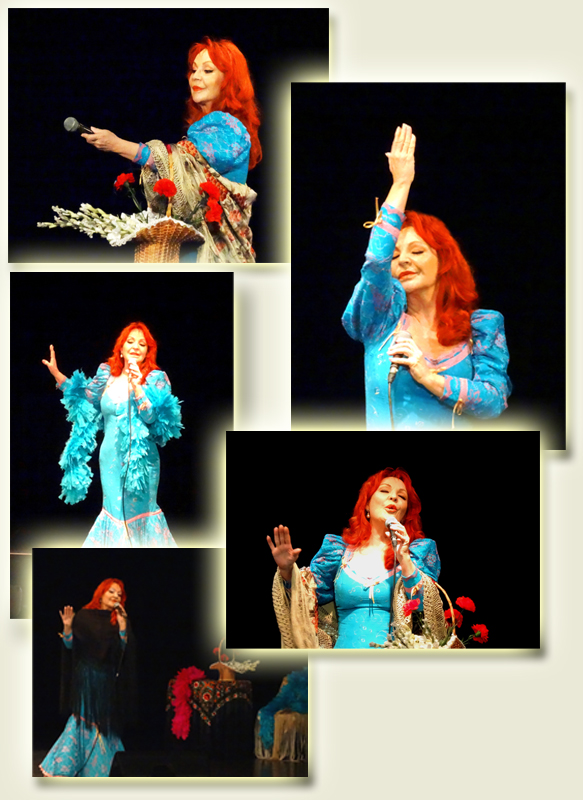 Mari Pepa’s concert at the El Madroño Cultural Center (Madrid) was one of those that remain in the memory.

Although with masks, the audience gave it their all and the concert was a great success.

Thanks to C. C. El Madroño and the audience for their applause and affection. 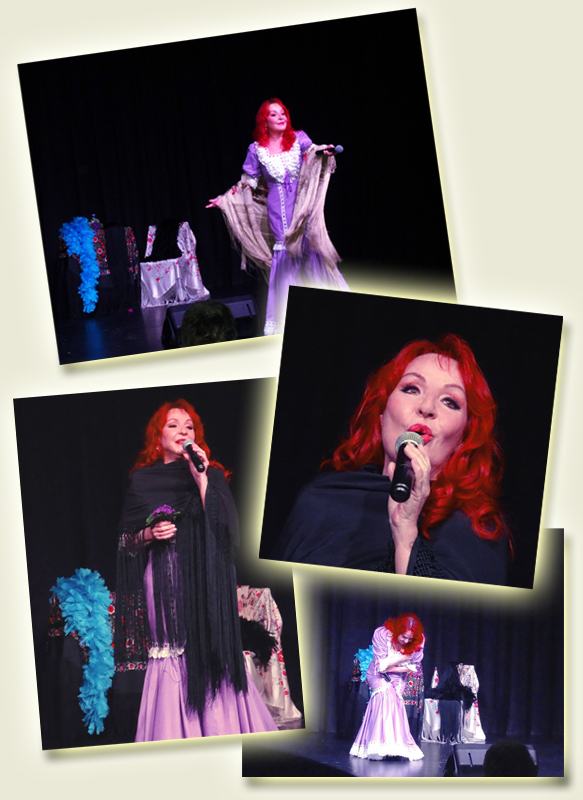 Enter on this link for read this interview: ENTREVISTA A MARI PEPA DE CHAMBERÍ 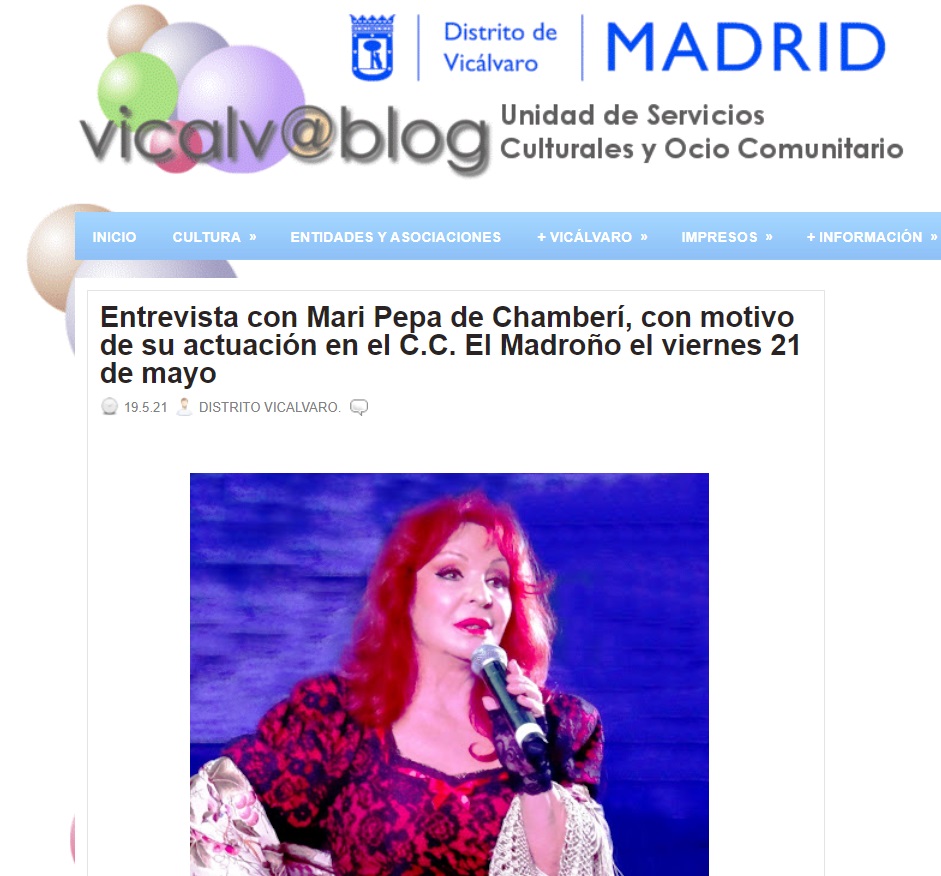 MARI PEPA offered with great emotion her show «El Madrid de San Isidro», since since 2019 and due to the pandemic, the festivities of San Isidro, patron saint of Madrid, had not been celebrated.

Accompanied by Miguel Tubía at the piano and Esther and Jesús Márquez in the dance and staging of a fragment of zarzuela, they reached the public with great success. 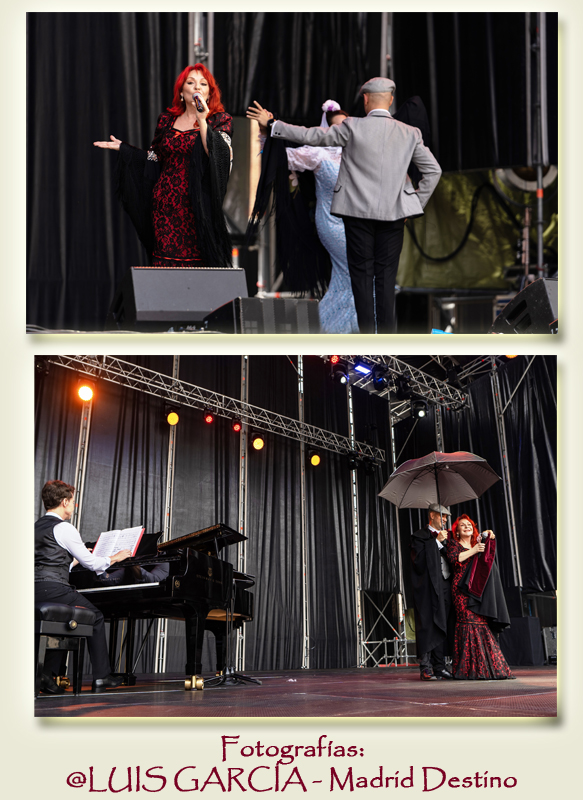 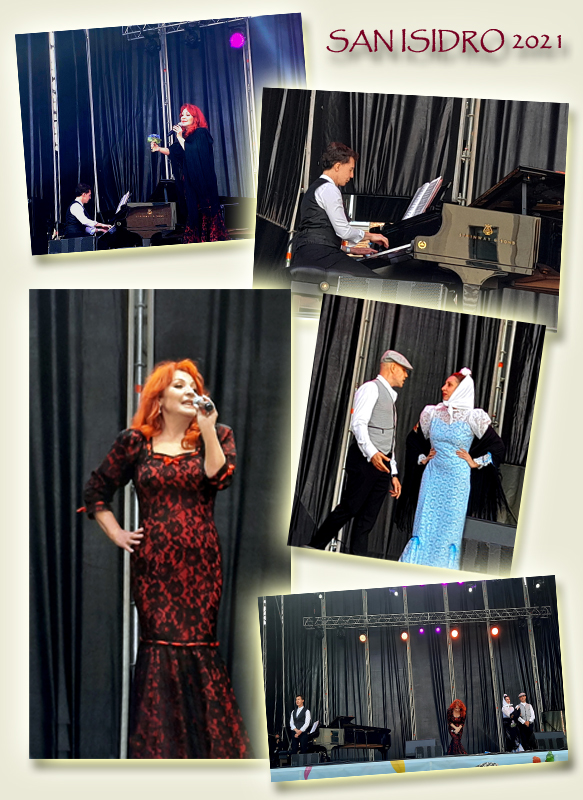 A traditional show by MARI PEPA at the San Francisco la Prensa for an audience that loves traditionalism, who shared with her a large part of the popular Madrid songs of the show. Very endearing atmosphere 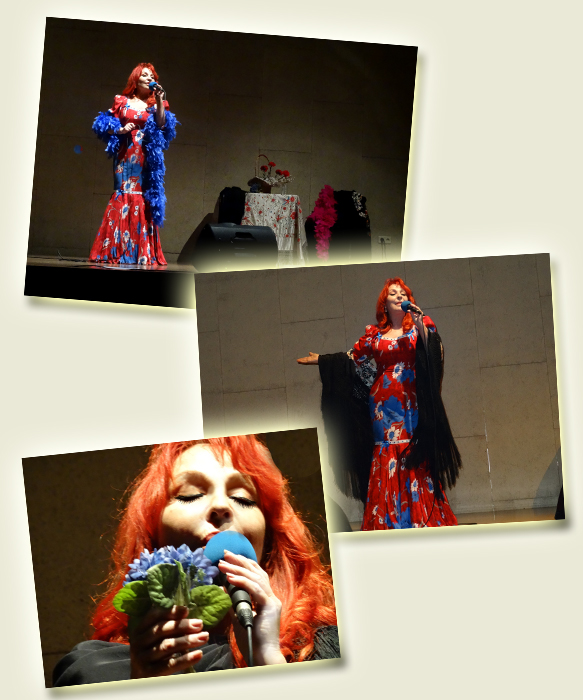 MARI PEPA interviewed by Telemadrid TV., For the program “Está pasando”, at the San Francisco la Prensa Cultural Center, before starting the concert that she offered at said center. 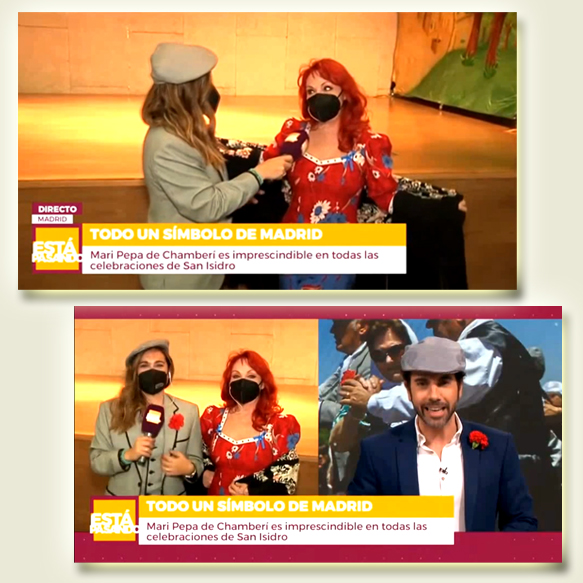 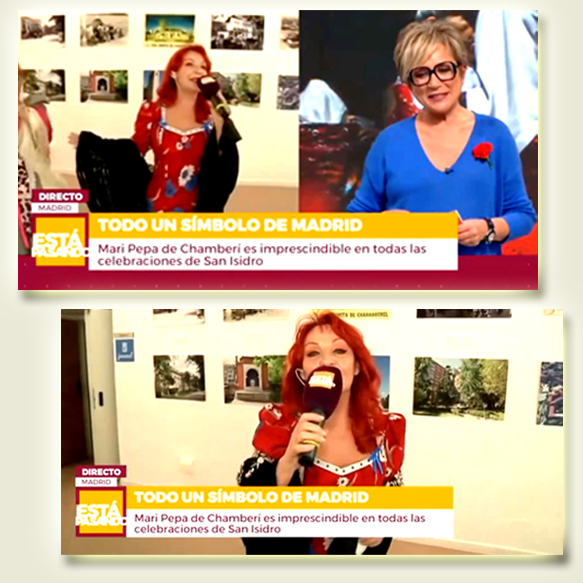 The concert on Friday, May 7, at the Sara Montiel cultural center was very
exciting.
A wonderful audience!
The masks did not detract from the joy of their voices, when they sang the
popular songs of our Madrid with Mari Pepa. 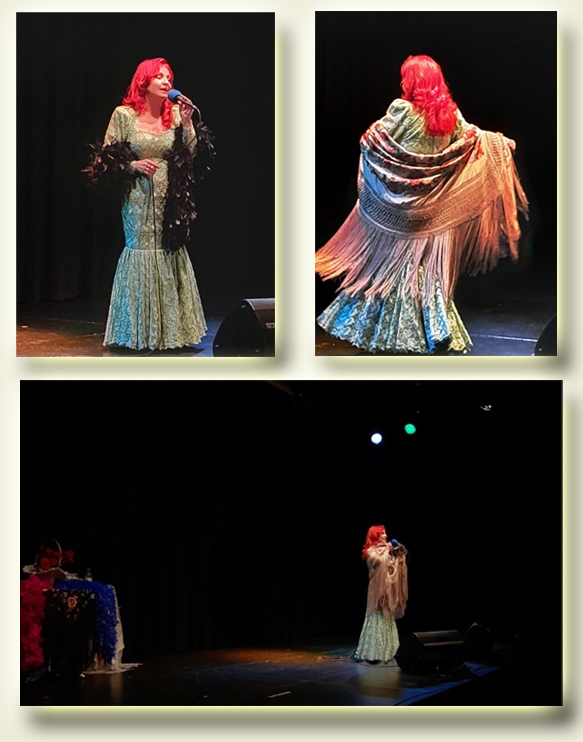 Mari Pepa sang before the image of Our Lady of Almudena, patron saint of Madrid, the Salve of her authorship.

This was during the events that took place in the atrium of the Madrid Cathedral on the occasion of the celebration of Madrid’s patron saint’s day. 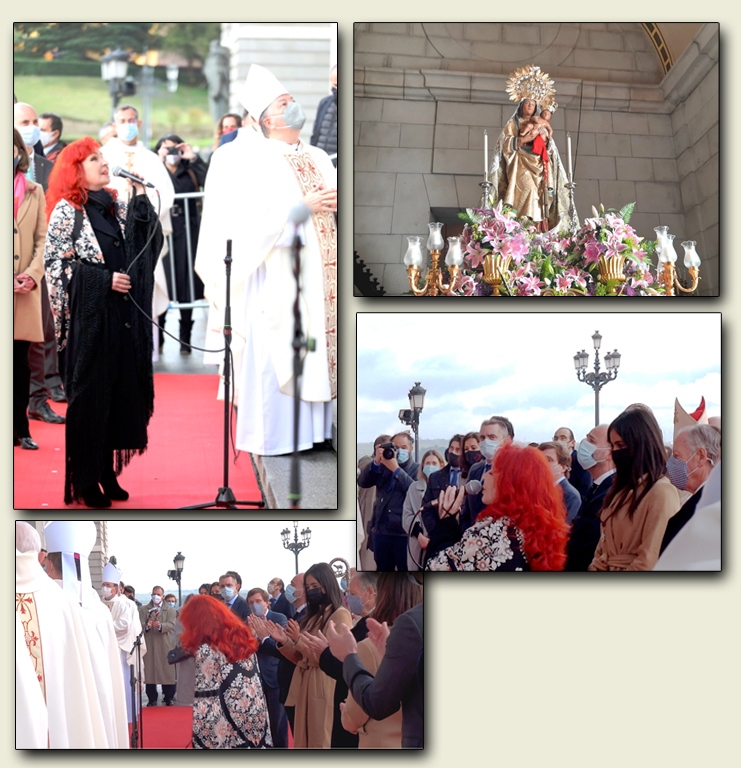 The event was broadcast on TV Telemadrid live.

Given the health emergency situation caused by the COVID-19, as cultural events could not be held, MARI PEPA premiered her work “Viva San Isidro” on You Tube, on the channel of the #CarabanchelEnTuCasa town hall, with great success.

A video with concerts that brought to mind the traditional atmosphere of the Madrid festivals in previous years. 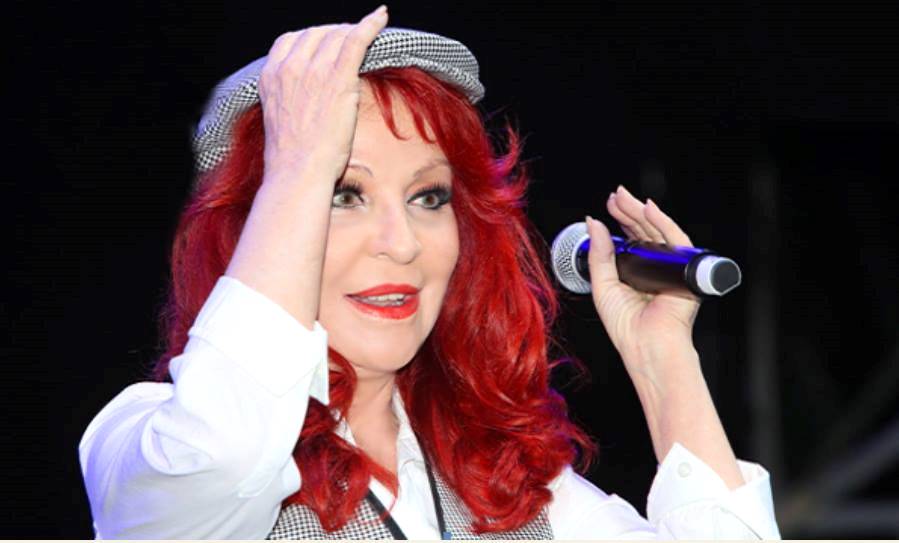 A fantastic evening was offered by MARI PEPA at the Cultural Center Almirante Churruca in Madrid, with a repertoire dedicated to Sara Montiel. The audience participated and enjoyed the show showing their affection and admiration for Mari Pepa. 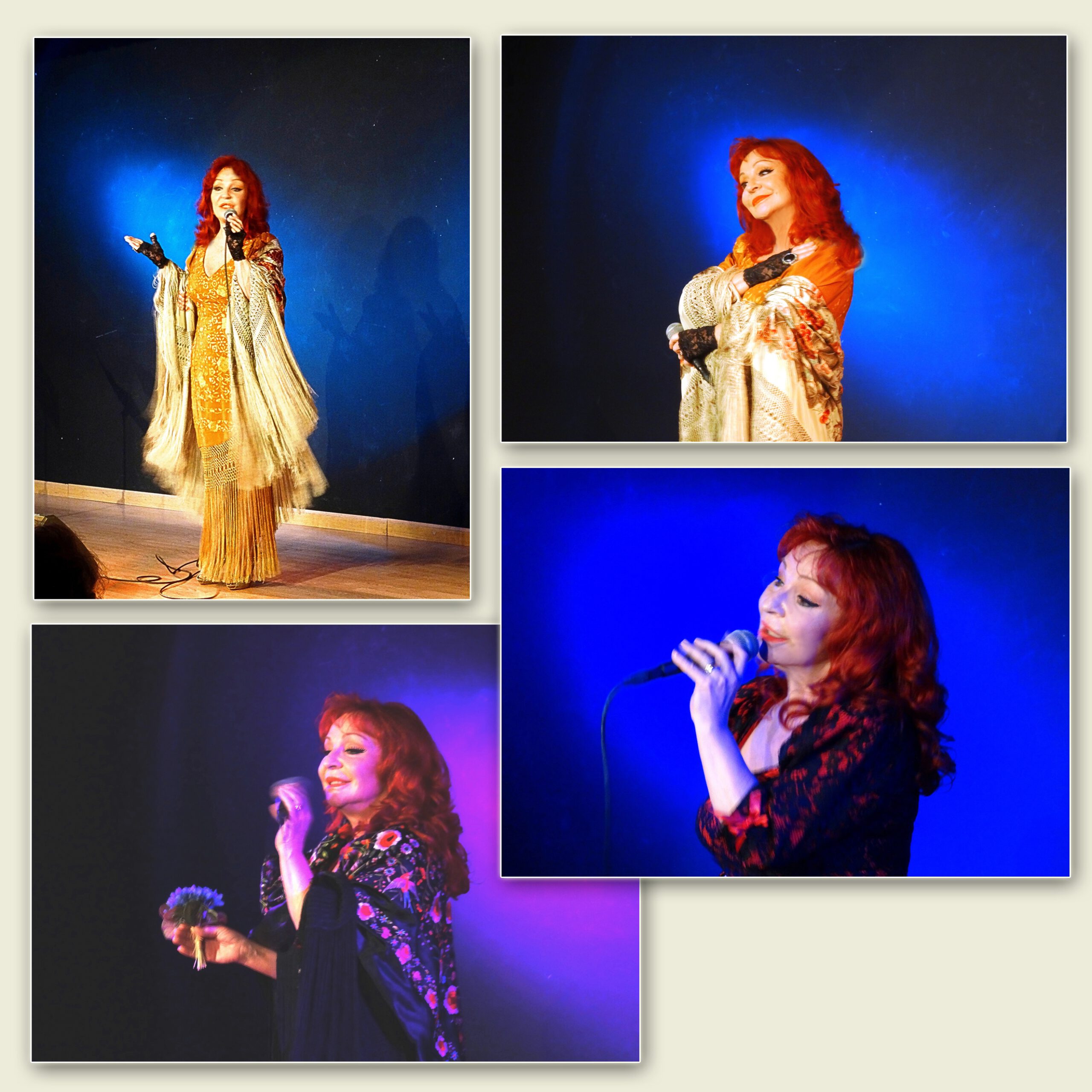