The Paraguayan-Madrilenian association “Roque Marangatú” paid homage to Mari Pepa, for her dedication during 30 years to the music of Madrid as composer and performer and her great contribution to Madrid’s casticismo, and in a very endearing act she was awarded the “Palma silver”.

Mari Pepa interpreted some chotis accompanied by pairs of dances of the Castizas Groups present there. The Uruguayan group “La Paloma” dedicated a song with a text written for her, which moved the artist.

Mari Pepa, thanking the tribute and remembering her artistic beginnings, in which she played Latin American music as a singer of the trio “Los Iguazú”; interpreted accompanied by them the song “Recuerdos de Ypacaray”. Gesture very applauded by the assistants. 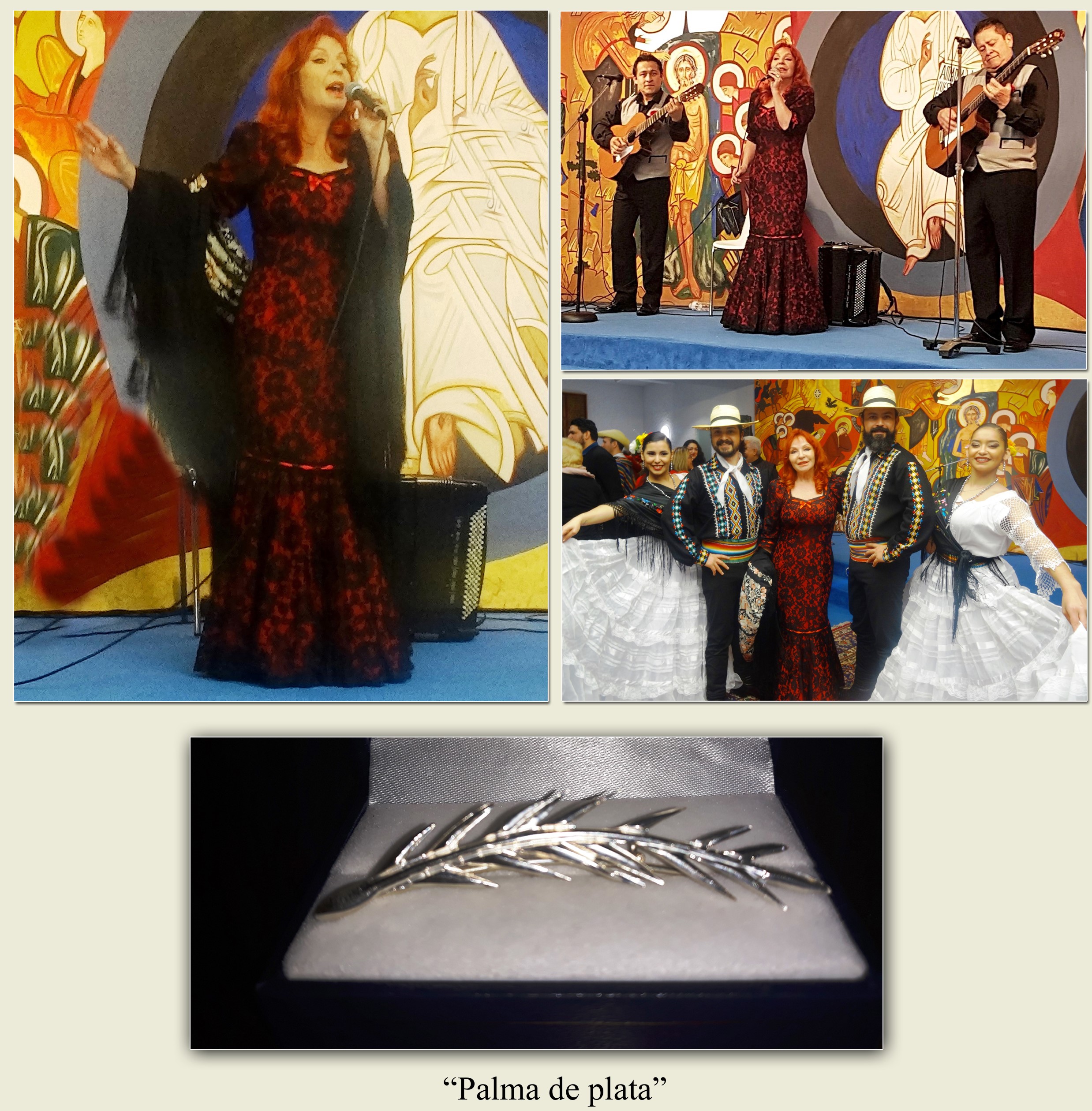 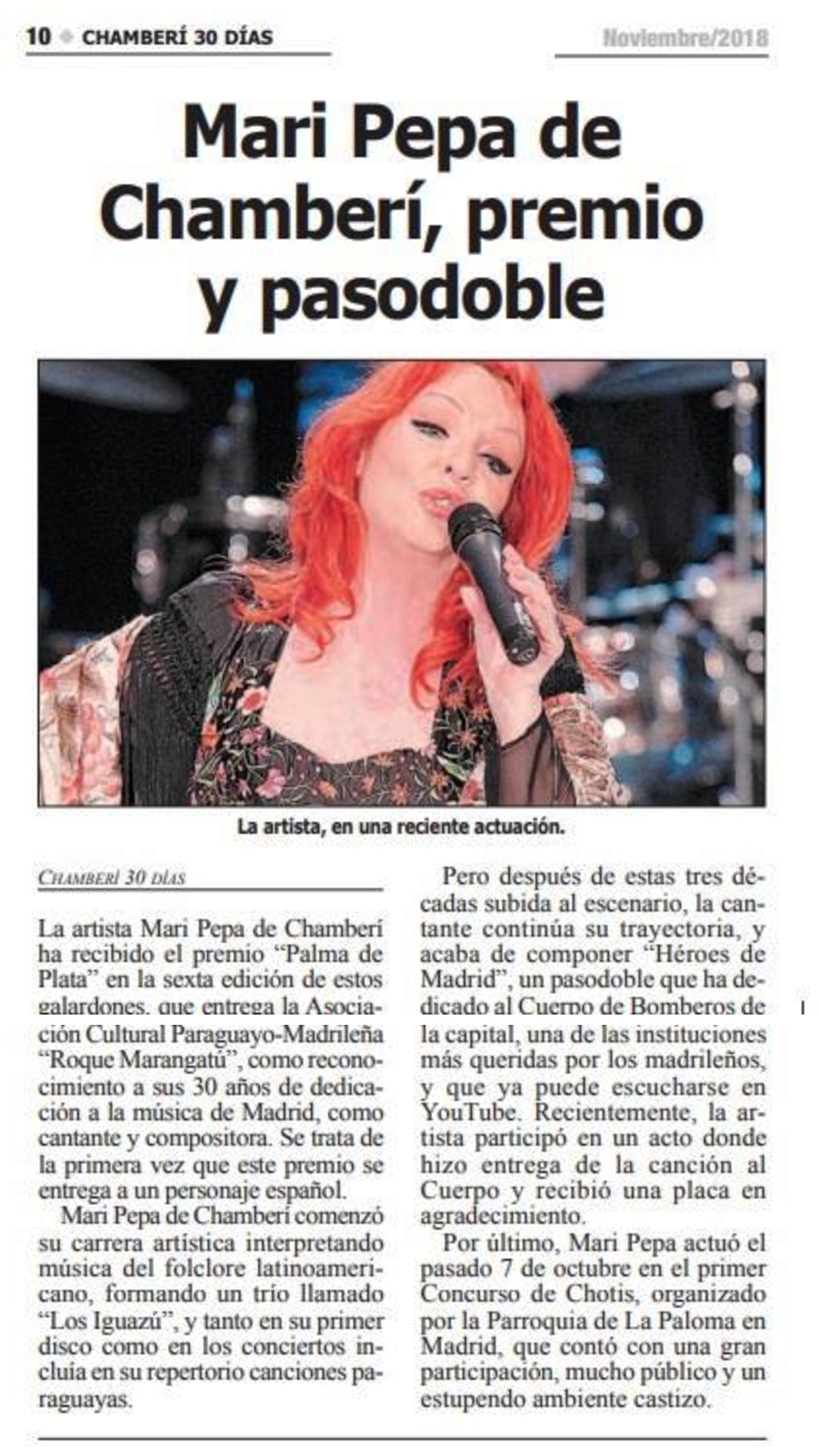 On the 9th feast of Our Lady of Almudena, patron saint of Madrid, MARI PEPA sang to the Virgin of Almudena a Salve composed by her, called “Salve Almudena!”.
This was in the Plaza de la Almudena, with Carlos Osoro, Cardinal Archbishop of Madrid and other ecclesiastical authorities, politicians and a large public congregated there.
Video:

MARI PEPA acted in the first Chotis contest, organized by the parish of La Paloma de Madrid, which was a success. A lot of participation, a lot of public and a great authentic atmosphere.

Two prizes were awarded: The first to Alfonsa Carnero and Francisco Bravo and the second to Carmen Cachadiña and David López.

MARI PEPA thanked the parish for its support and dissemination of traditional music. 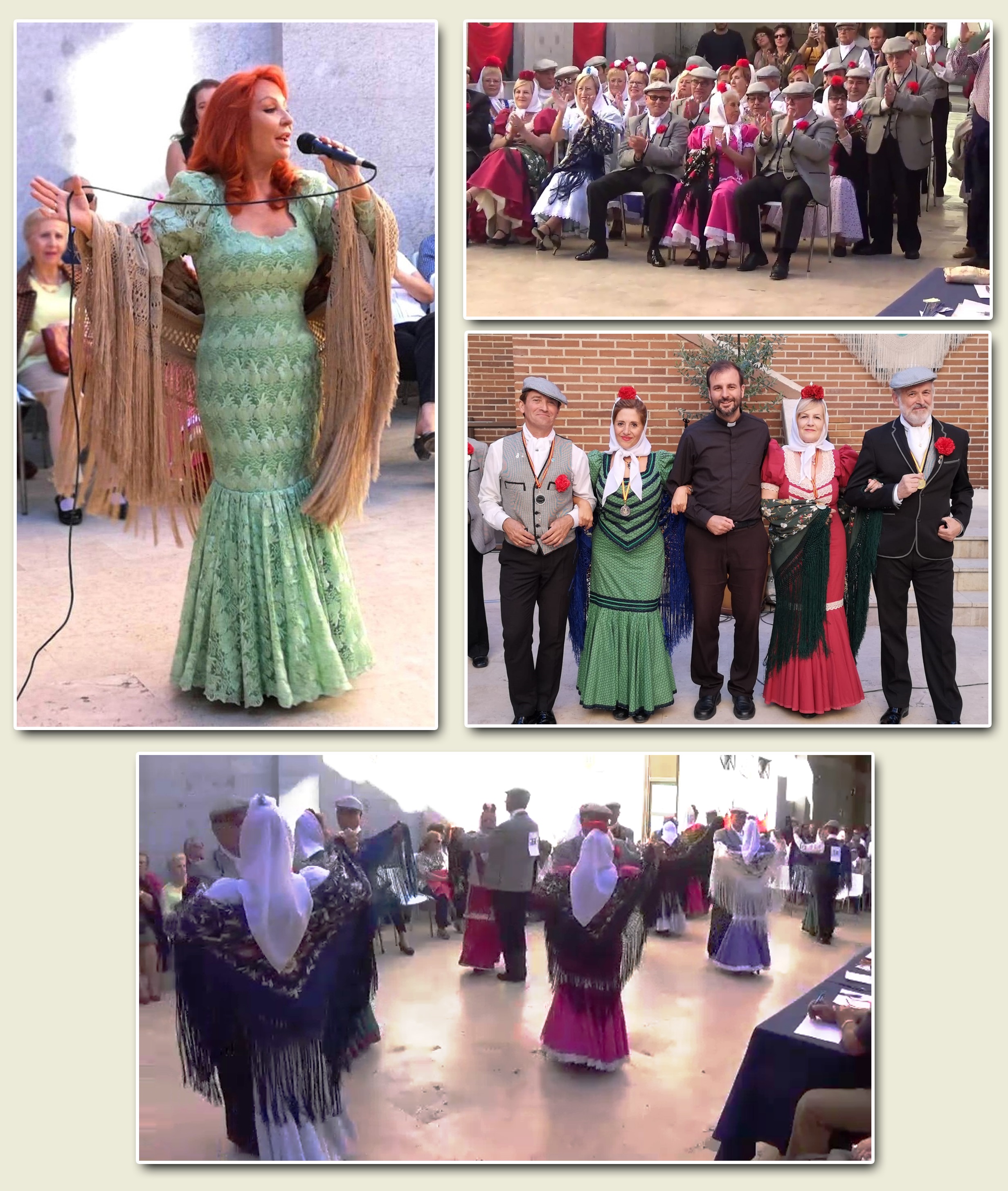 Mari Pepa closed the festivities of La Paloma, singing the Salve before the painting of the Virgin, thanking the public for their assistance in supporting this event every night. 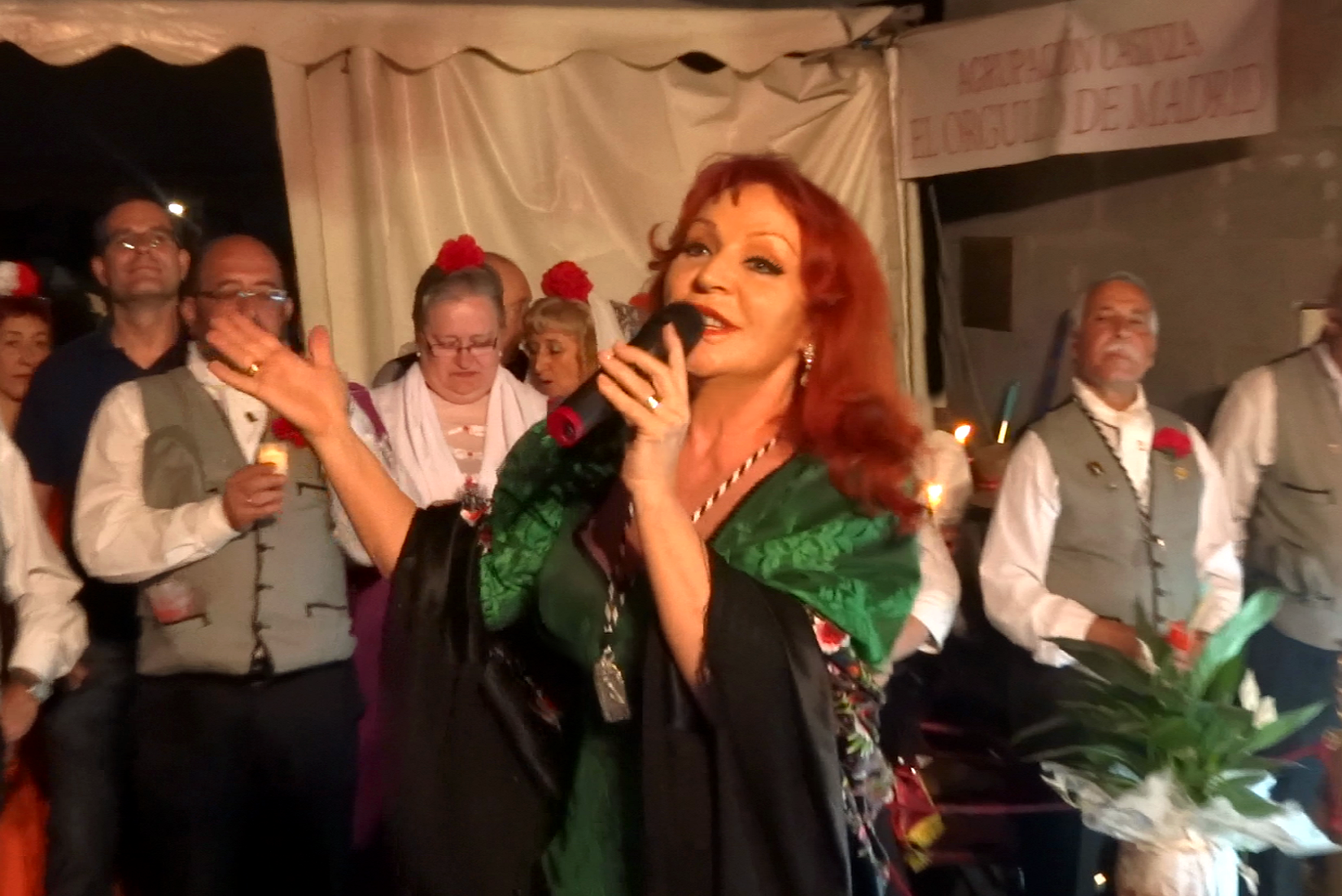 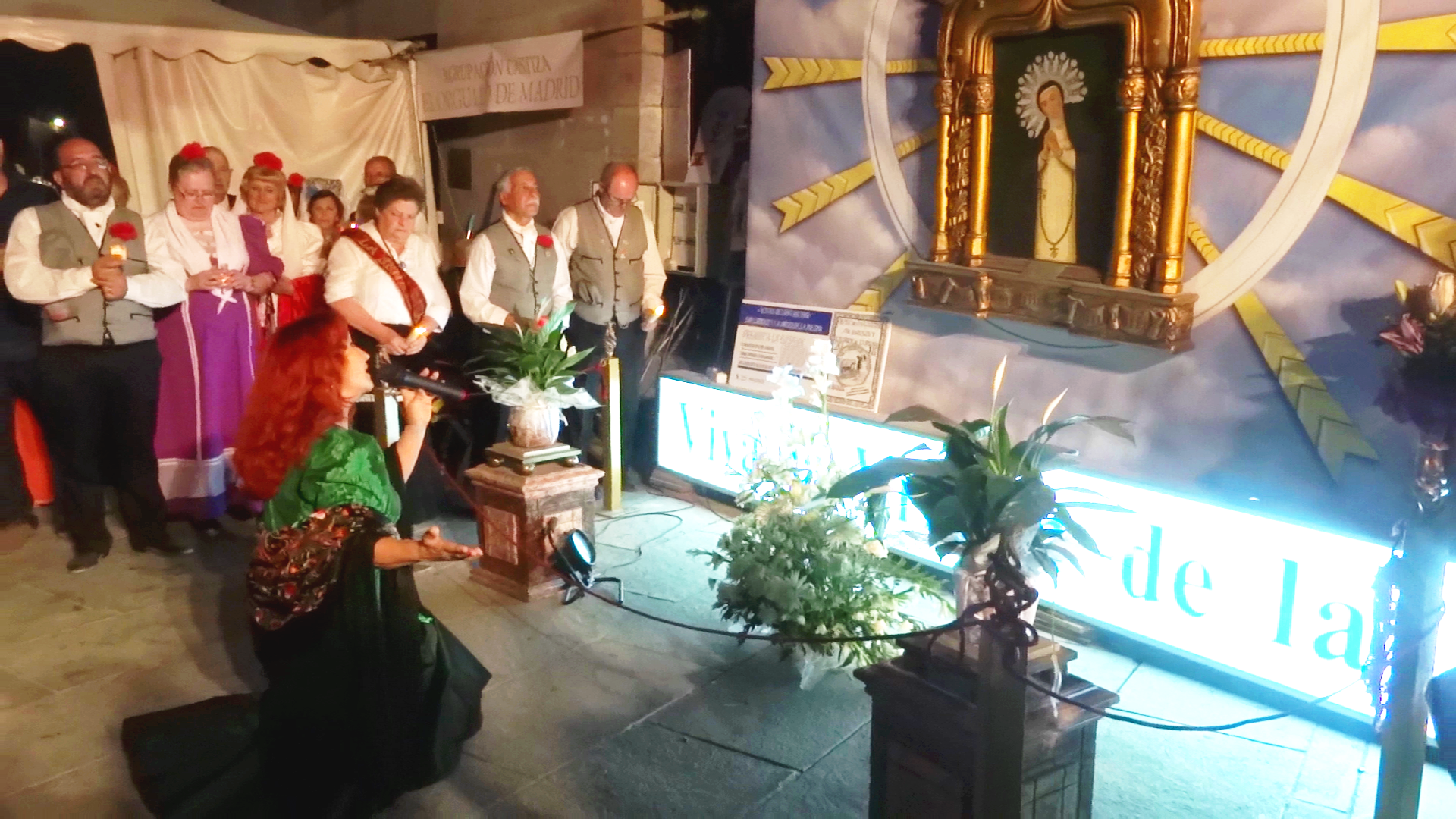 MARI PEPA presented the song “Héroes de Madrid” to the Madrid Fire Department, of which she is the author of lyrics and music, composed as a tribute to the Fire Department.

MARI PEPA received a plaque with the thanks of the Fire Department for her work. 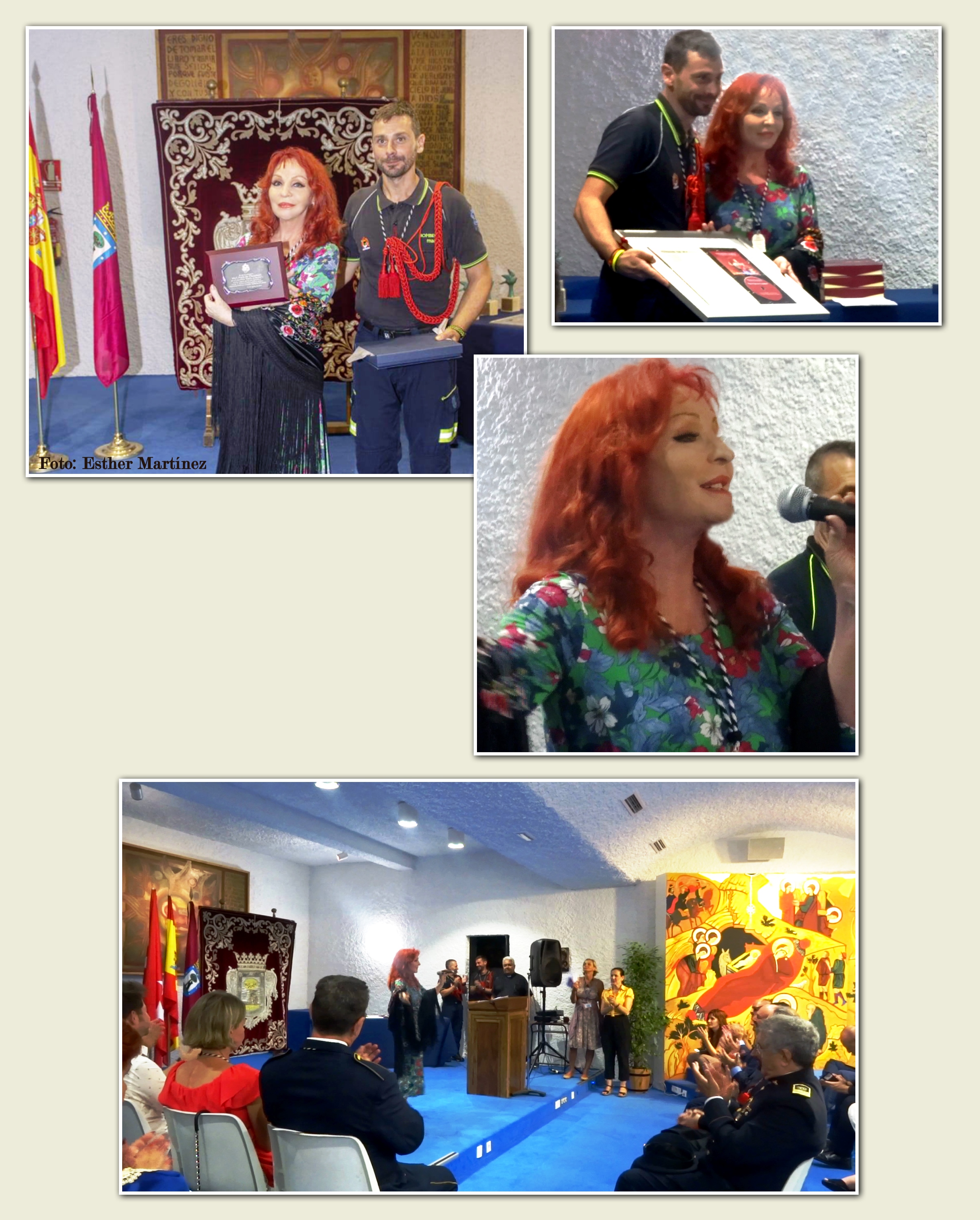 In the temple, as in previous years, MARI PEPA sang the salve before the Virgin of La Paloma, before leaving to process.

See video by clicking on this link: https://www.youtube.com/watch?v=6hbX2ulZtmo 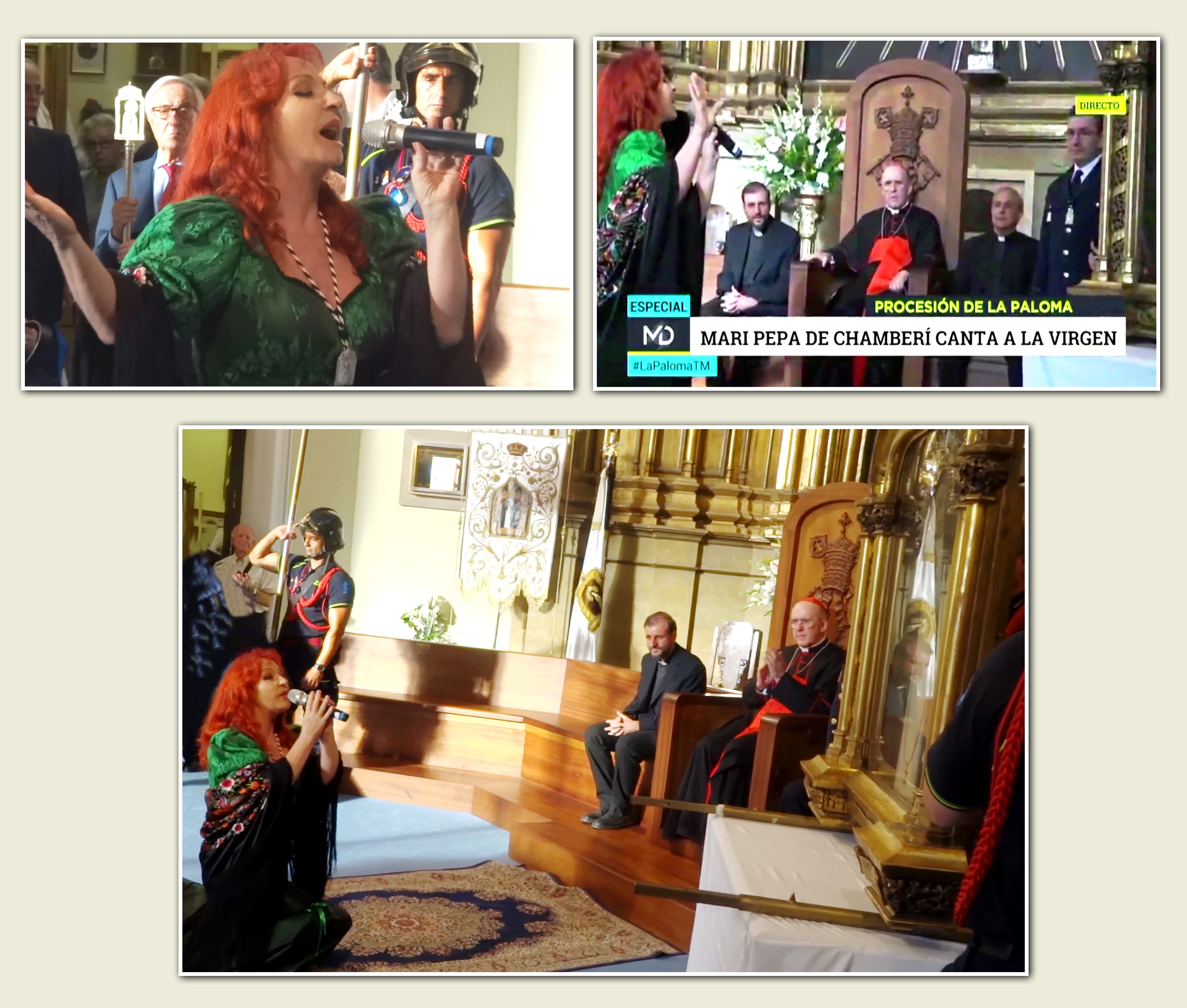 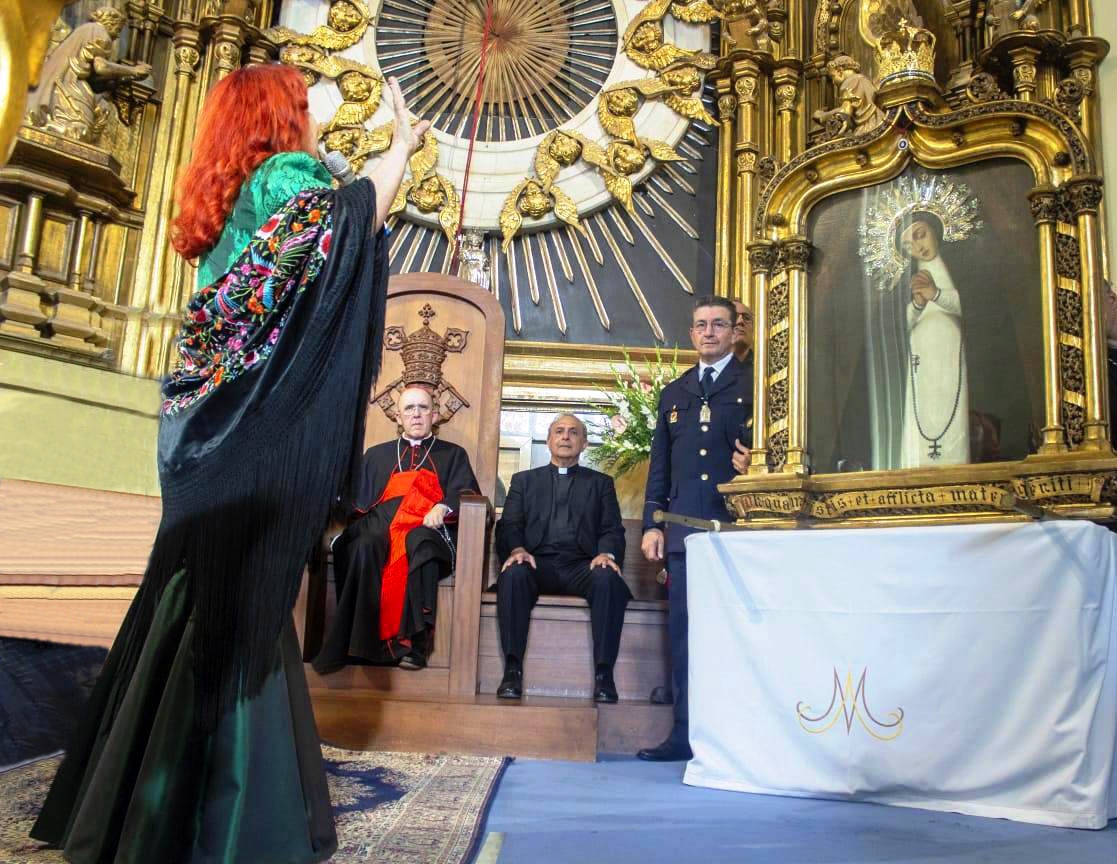 During the main Mass, celebrated in the Church of La Paloma, in Madrid, presided over by Cardinal Carlos Osoro, MARI PEPA sang the “Padre Nuestro”; new musical composition of which she is an author.

See video by clicking on this link: https://www.youtube.com/watch?v=a6s_jpfB_Gk&feature=share 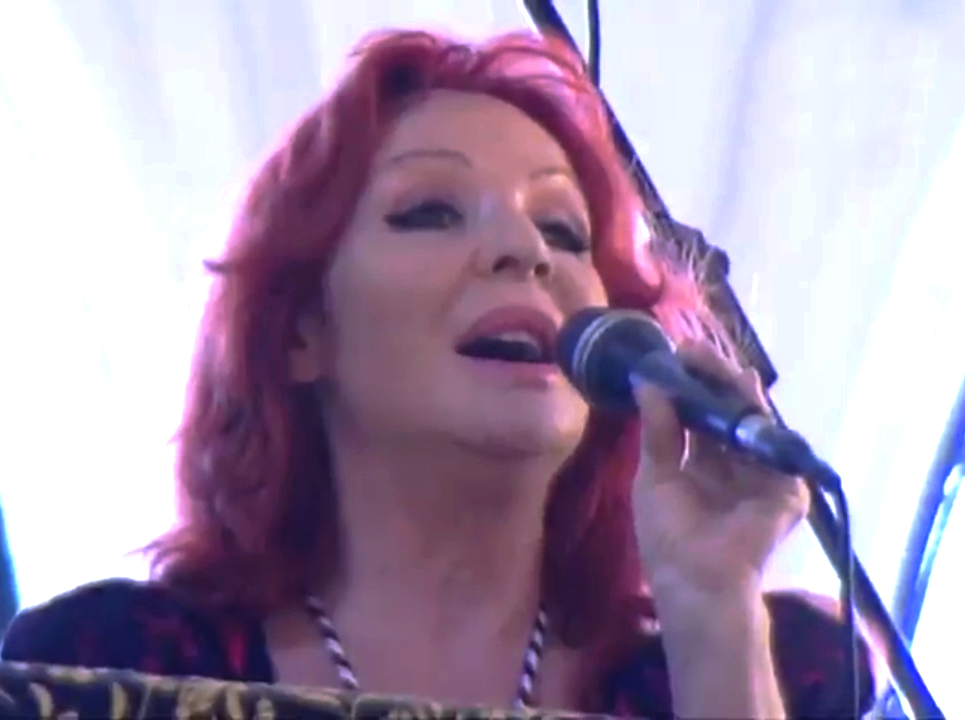 MARI PEPA has been 30 years dedicated to the music of Madrid and for that reason, on August 14, the Association Castiza “De Madrid al Cielo” made a tribute and delivery of a commemorative plaque.

At the end of the act of homage, MARI PEPA sang a capella a fragment of the song “DE MADRID AL CIELO” and thanked them for the tribute and their work of diffusion of the traditional music.

Link to see video fragment of the event: https://www.youtube.com/watch?v=JDtwwWMUQ3E&feature=youtu.be 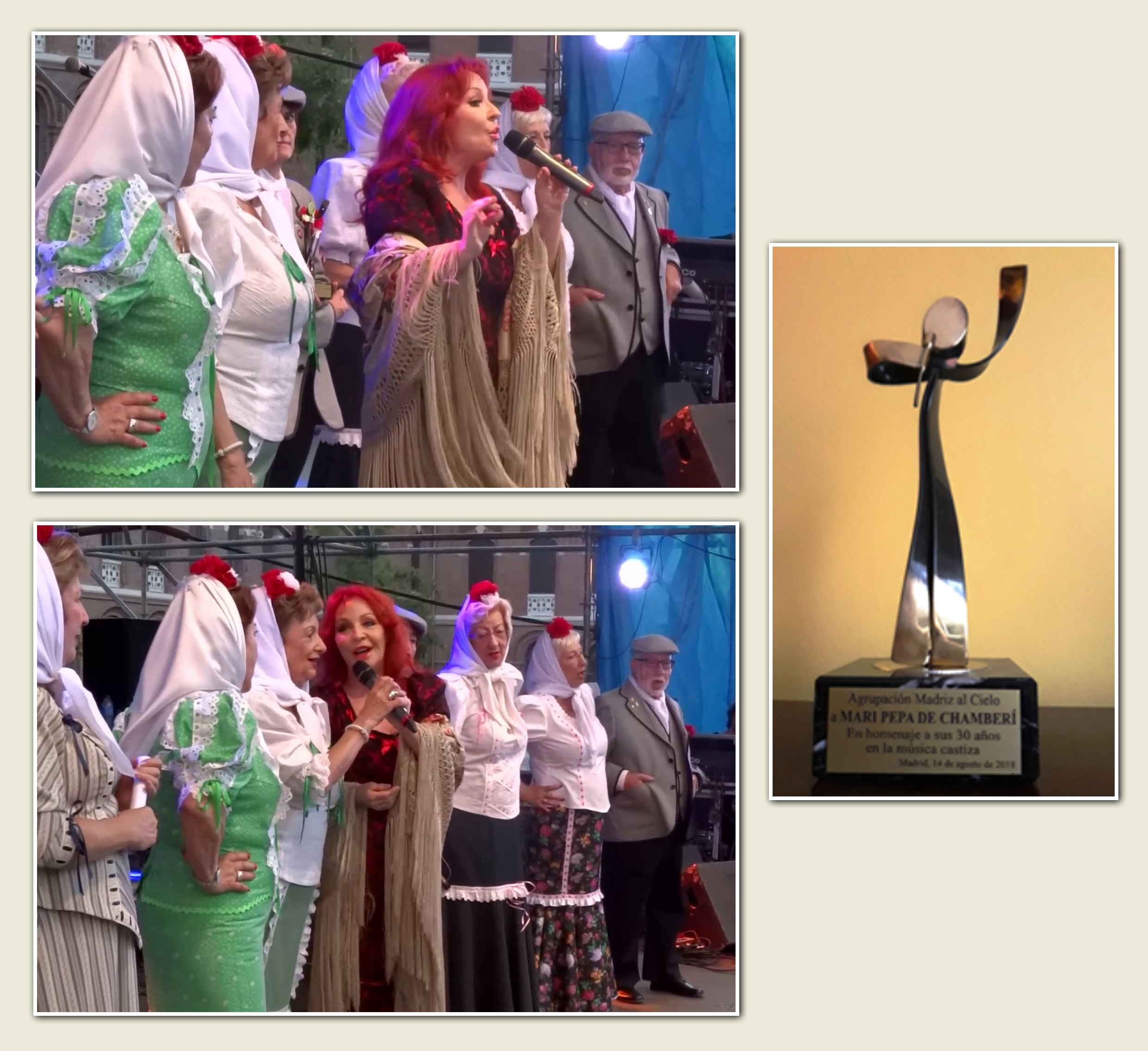 At 12 o’clock at night, MARI PEPA went to Plaza de la Paja on time, to sing La Salve before the painting of the Virgin of La Paloma, which is exhibited there every year by the castiza group “El Orgullo de Madrid”. 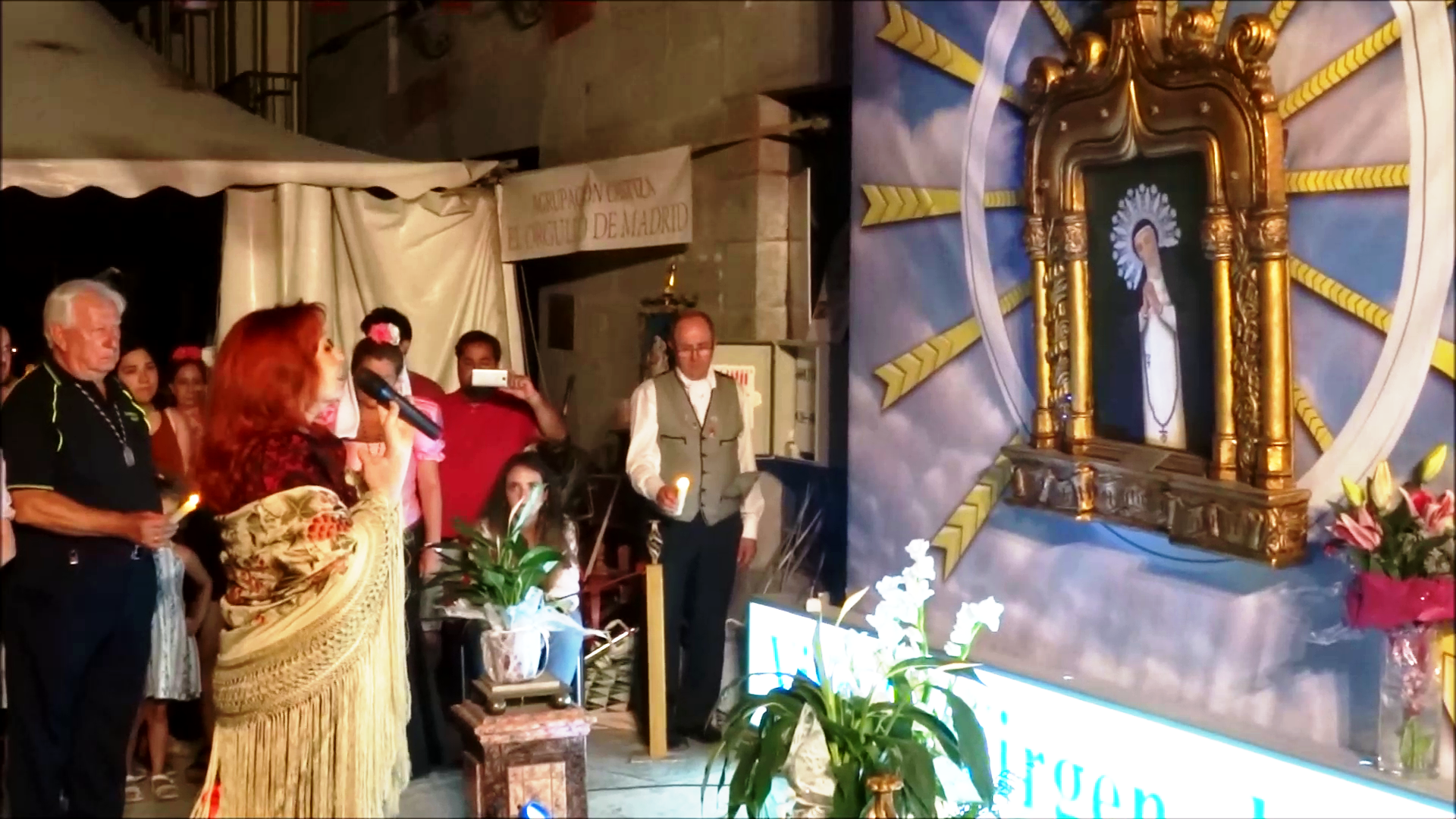 MARI PEPA joined the Congregation of the Virgin of La Paloma and was awarded the medal. 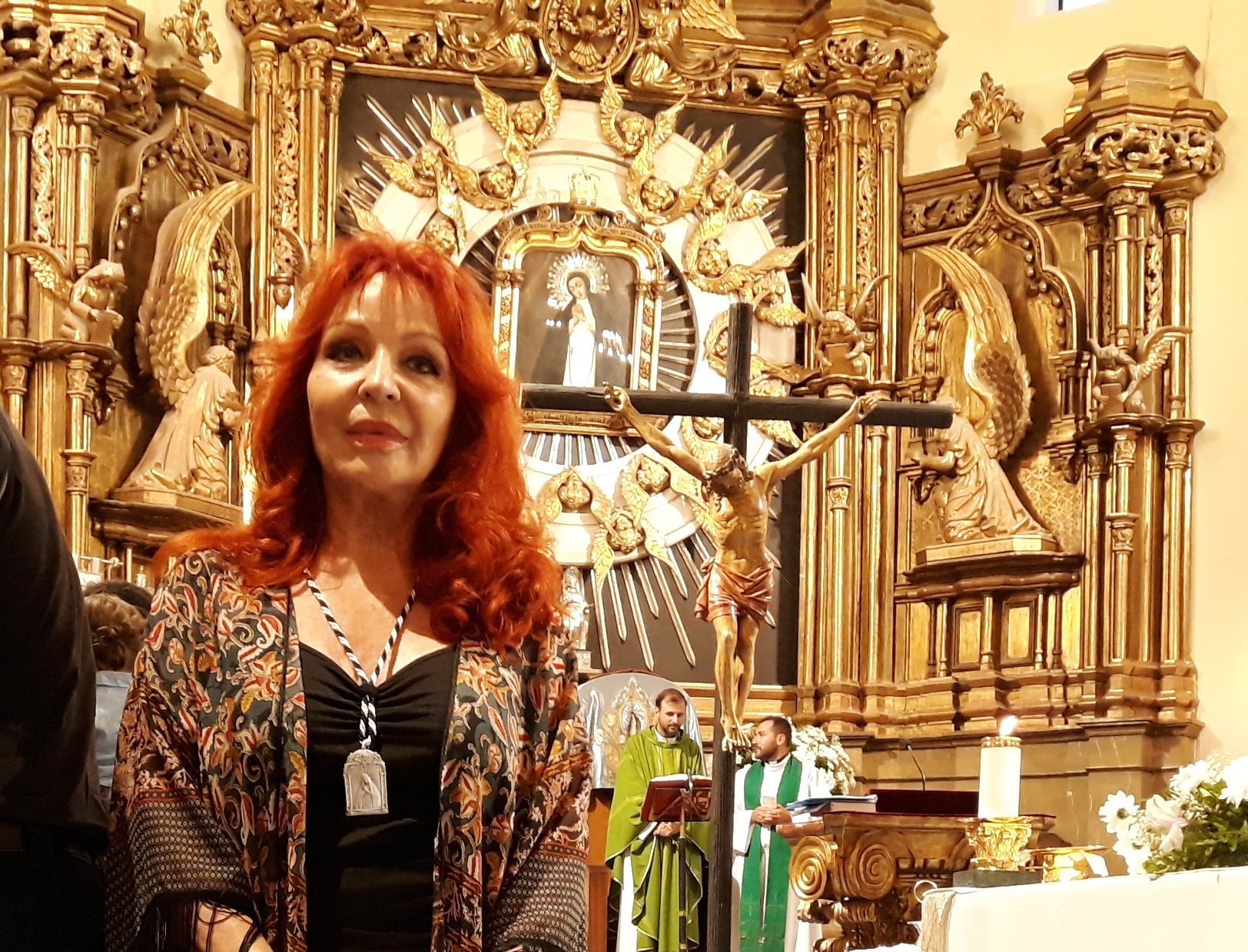 At 12 o’clock at night, in the Plaza de la Paja, MARI PEPA sang one more day to save her before the image of the Virgin of La Paloma.

With reasons for the concerts and events in which MARI PEPA will perform, Víctor Alfaro from RADIOSOL XXI gave him an intimate interview.

In this link you can listen to it. 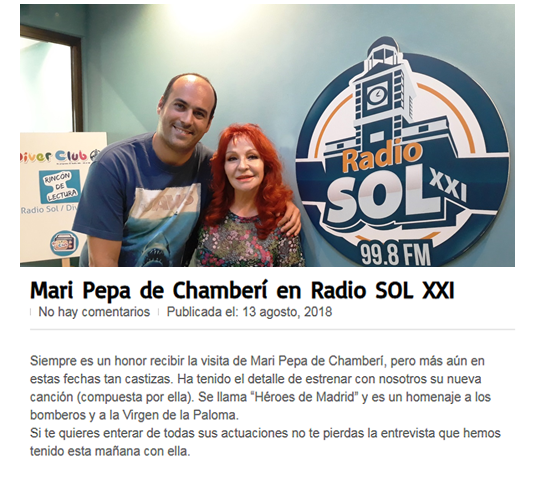 MARI PEPA was present in the day of ” Los Castizos ” at the Parish of La Paloma, where he sang in the mass for the first time the singings “Padrenuestro” and “Dios te salve, Maria “, from his authorship. Later it gave I begin the celebration of the díaen the court of the parish and MARI PEPA opened the act singing to capella a chotis and he was grateful to the pure groups for his great work and dedication to spread and to support the traditions of Madrid and asked them to continue with this great work. 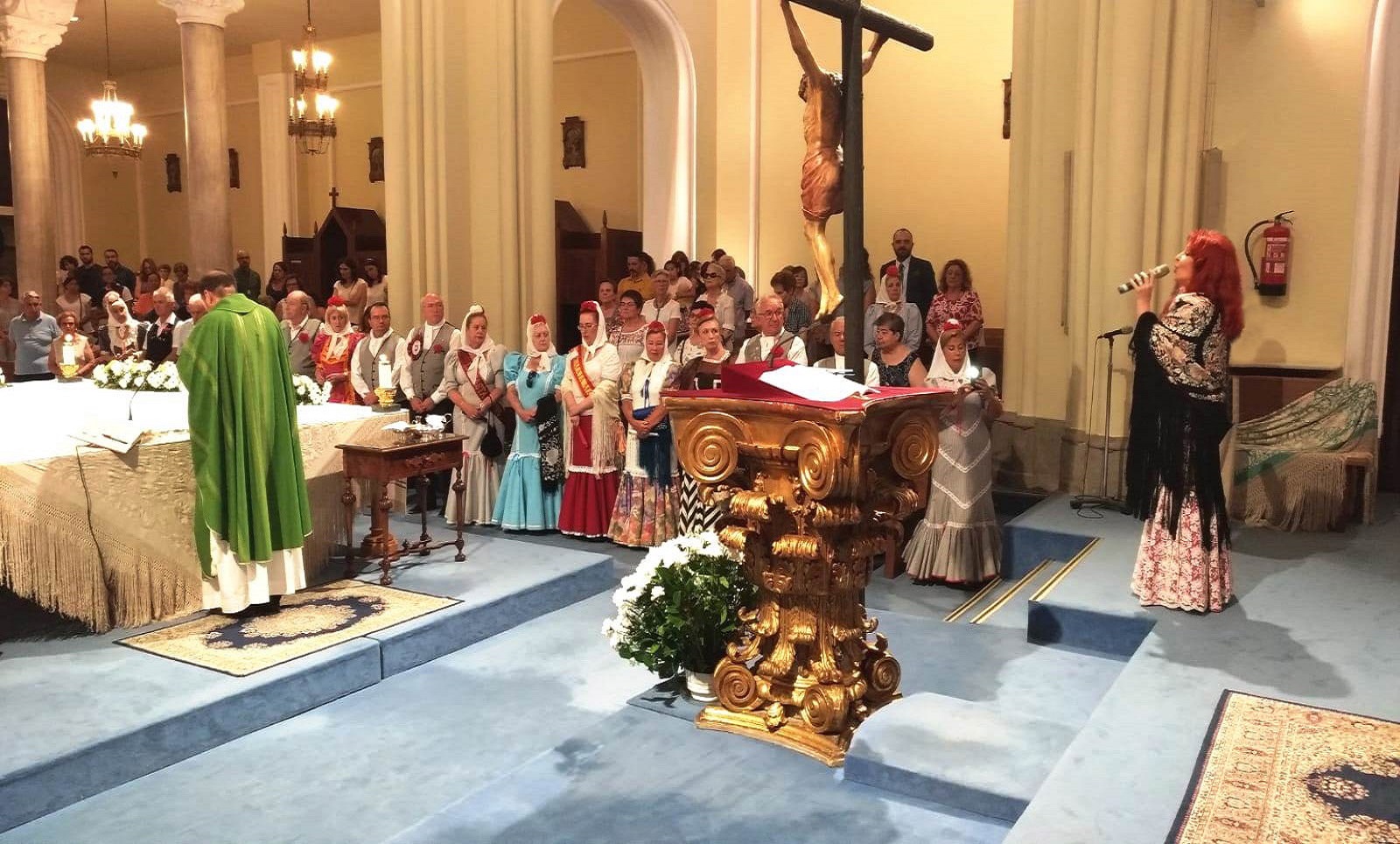 At 12 o’clock in the evening MARI PEPA sang the Salve to the Virgin of la Paloma in the Plaza de la Paja. 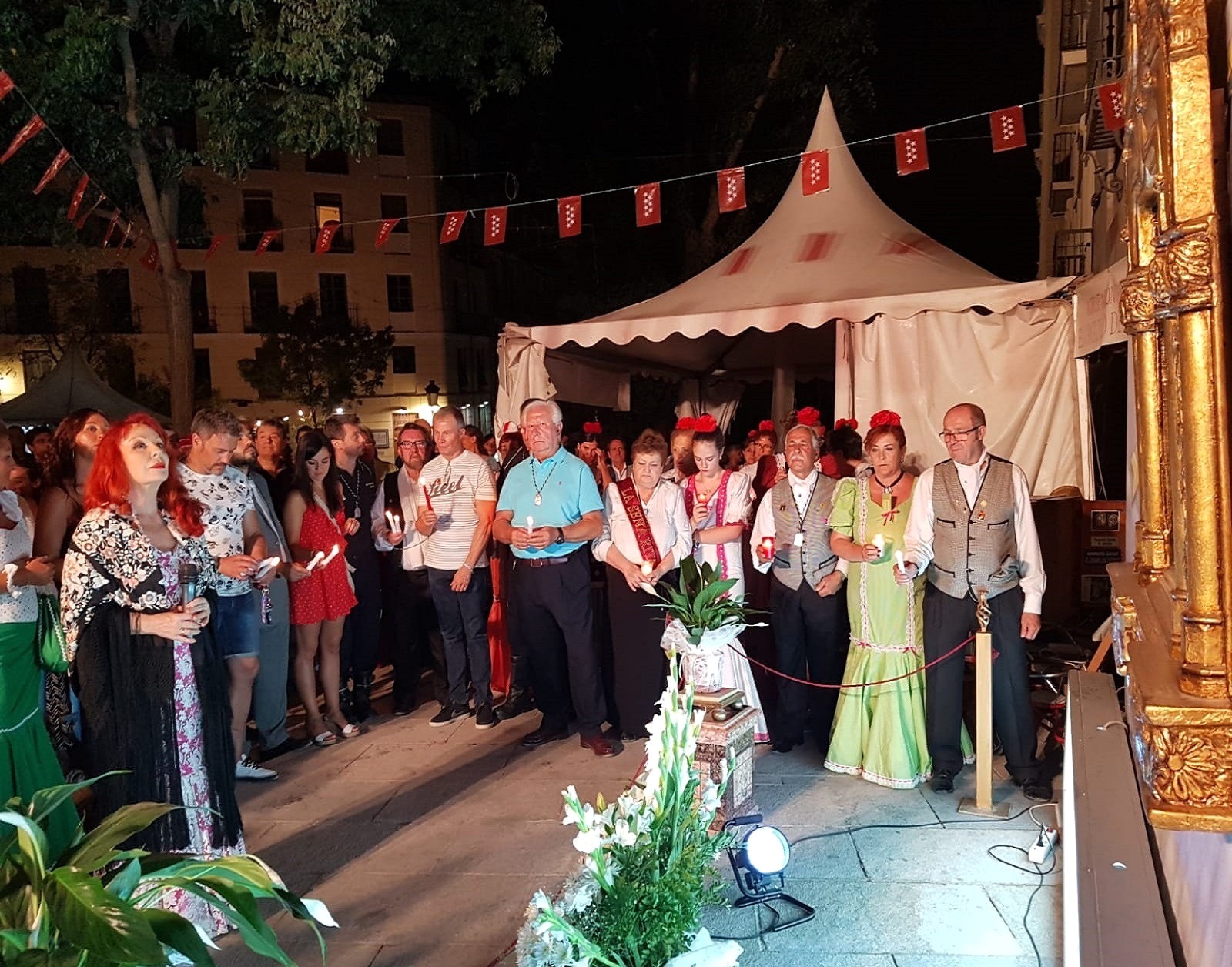 Mari Pepa started the Feast of the Dove in the Plaza de Las Vistillas, with a concert full of audience, creating a friendly and fun environment that was very successful.

Mari Pepa at the end, thanked the audience for their attendance, their enthusiasm and participation and asked him to maintain the traditional traditions. 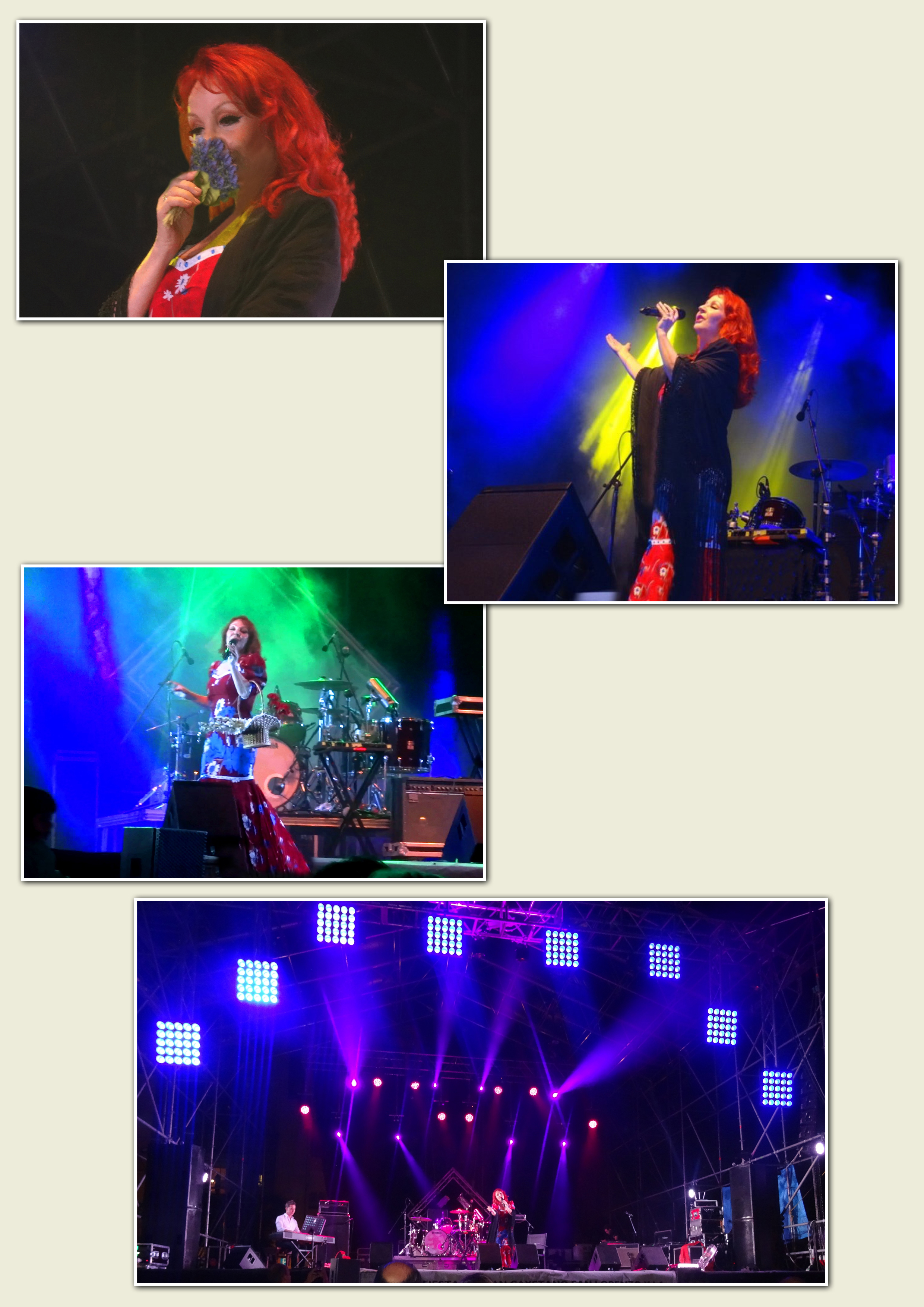 At 12 o’clock at night, MARI PEPA was singing the Salve in the Plaza de la Paja in Madrid, before the canvas of the Virgin of the Dove, which the Castiza group “The Pride of Madrid” exhibits every year to be venerated.

Much public, fervor, many candles and a great silence. 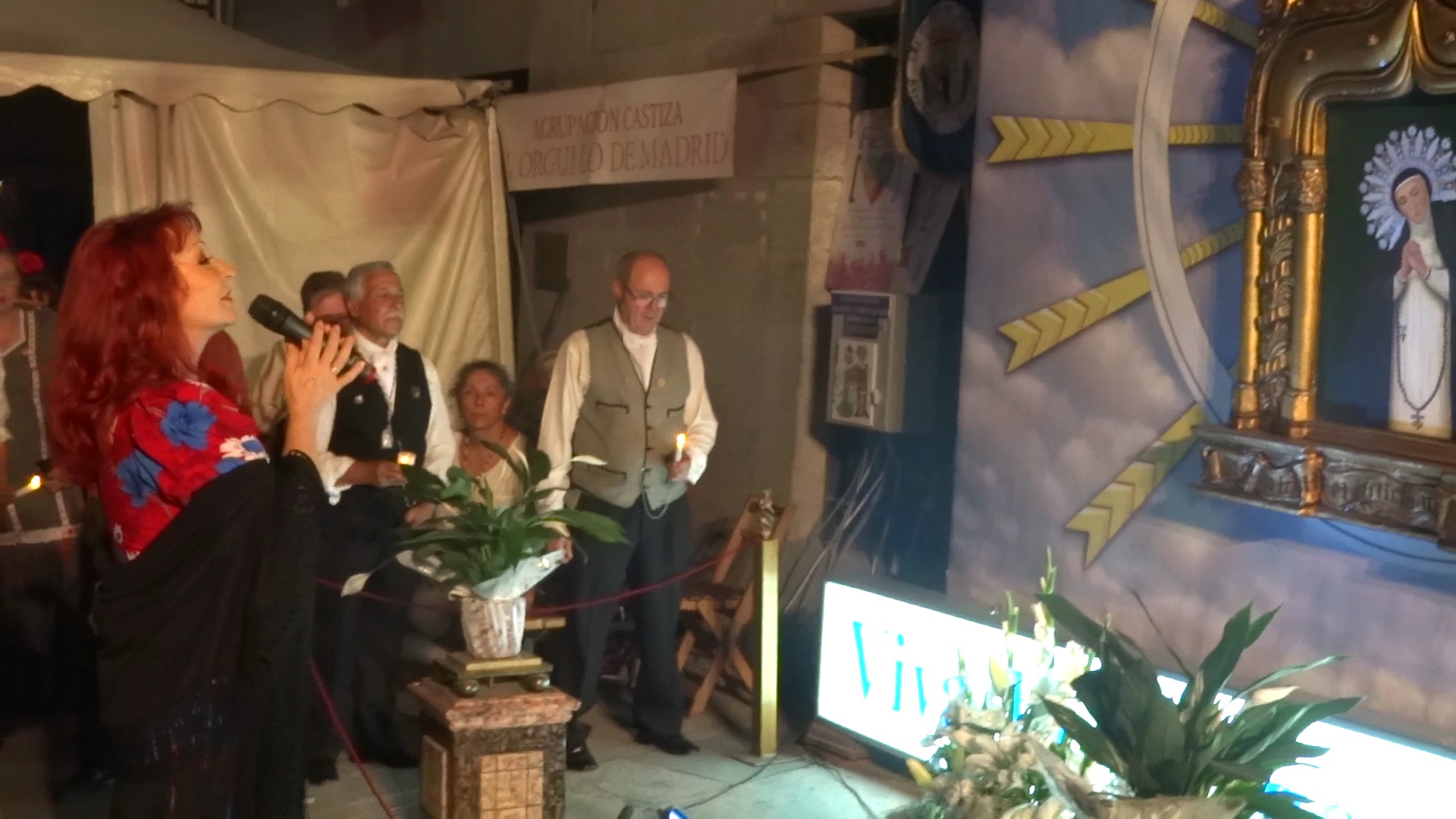 Emotional moments lived by MARI PEPA in the parish of Santiago in Madrid, when the medal of the Congregation of Santiago was imposed. Then he sang the hymn to the “Peregrino de Santiago” of his authorship. 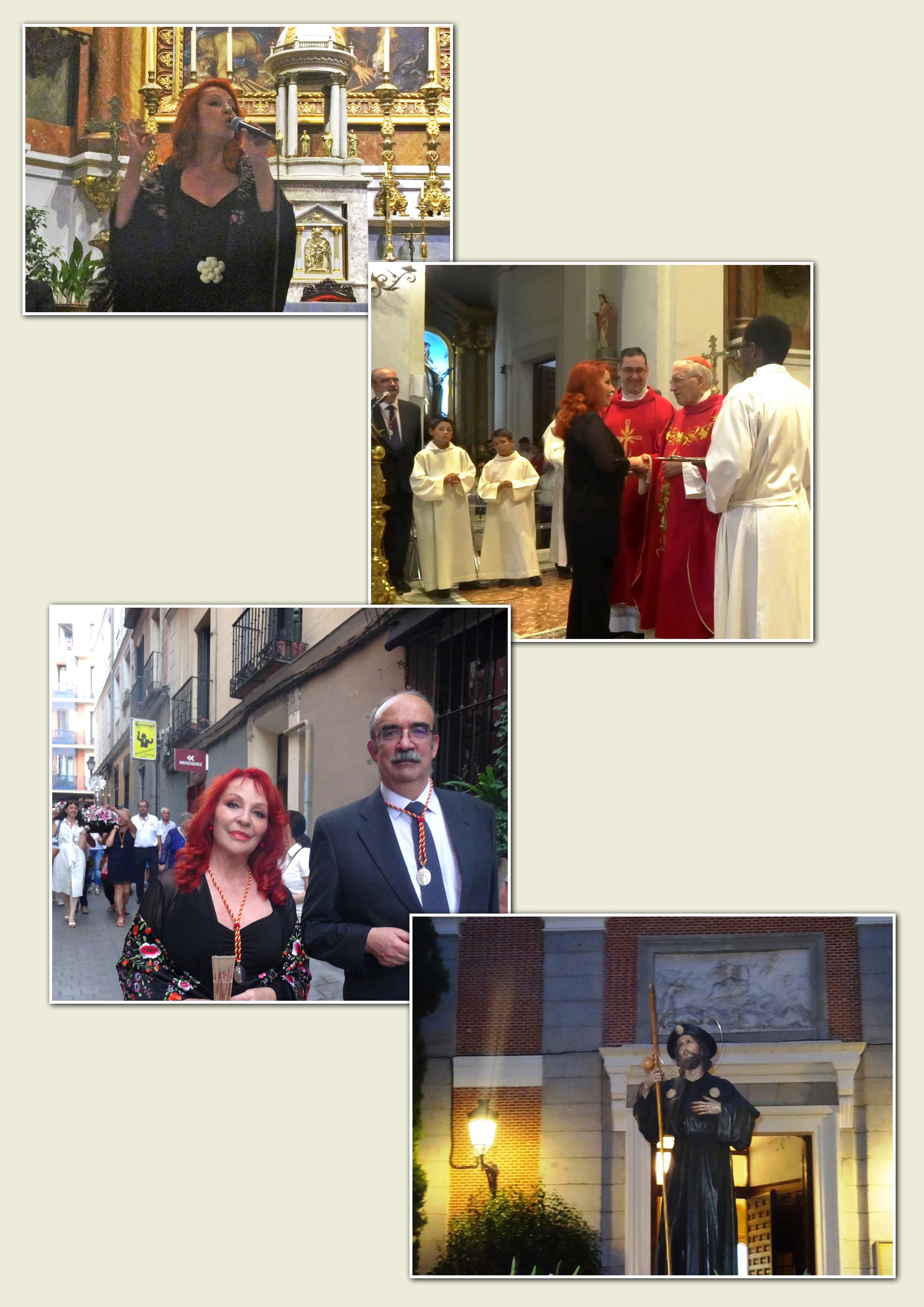 The concert was endearing and of great artistic quality, which made the large audience that attended gave themselves thoroughly and applauded with great enthusiasm.

The presentation was made by Nieves Martínez and Fernando Mairata.

Mari Pepa came out on stage wearing a poncho and told the audience that her beginnings were with Latin American music with the name of “Los Iguazú” and to remember it, she played a Paraguayan polka called “El pájaro chogüi, followed by the themes” Si se the singer is silent “,” El arriero “,” Alfonsina and the sea and others of that style that pleased the public very much.

The intervention of Jesús Márquez and Cristina García dancing a chotís with great mastery, gave way to the traditional music 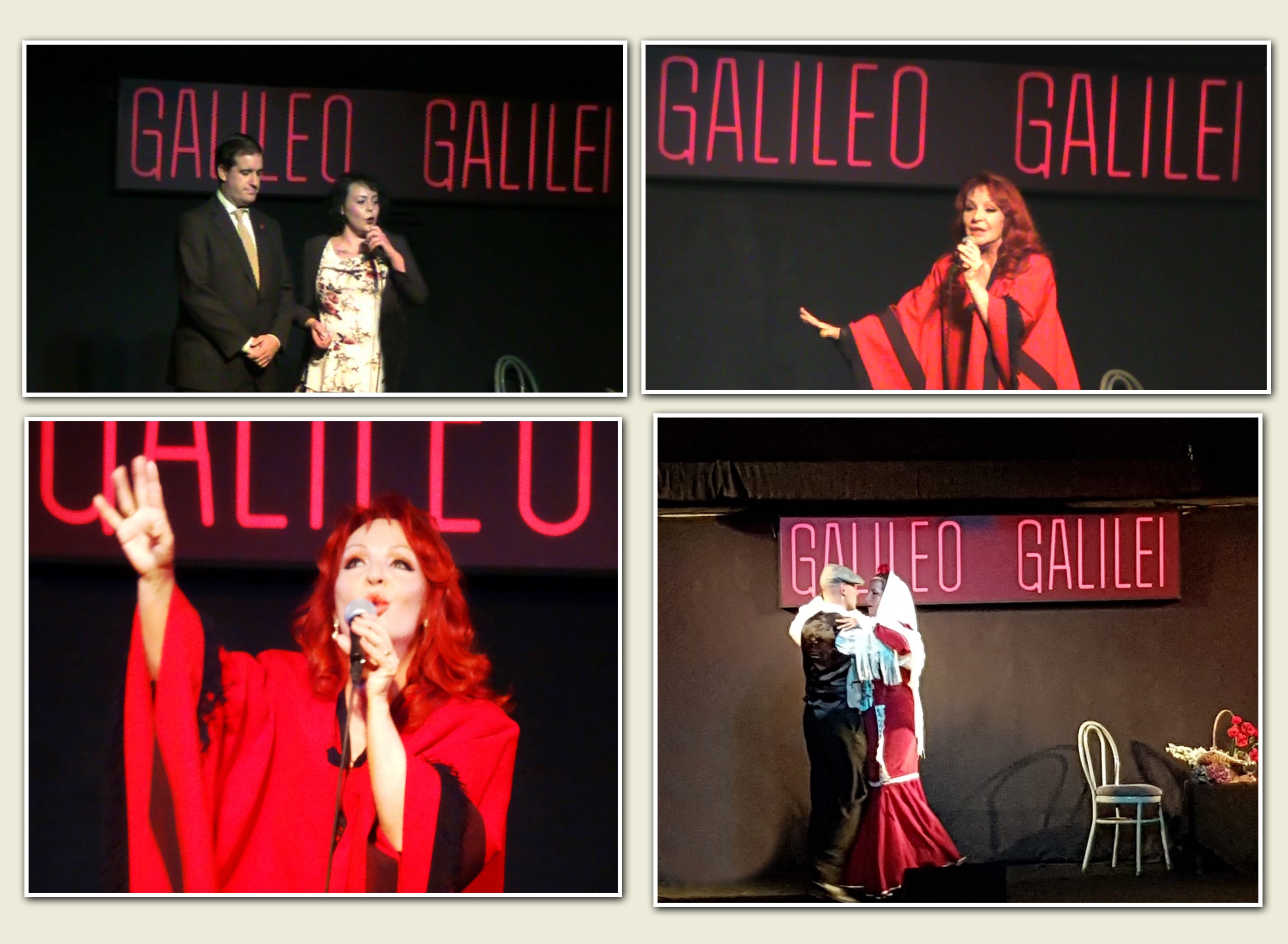 MARI PEPA interpreted Madrilenian popular songs and subjects of its authorship, to the rhythm of chotis, pasodoble, cuplé, pasacalle, etc., Songs like “Los nardos”, “La violetera”, and a series of cuplés and happy songs that were chanted by the public. He also interpreted his composition “Peregrino de Santiago”, dedicated to a representation of the collective of the Order of the Viera present in the room, which created another great moment.

At the end of the show and after a long applause with the audience standing, MARI PEPA received a bouquet of flowers from her fan club and the affectionate greeting of the writer and poet Juan Sánchez Alonso.

A memorable night to celebrate

the 30 years that MARI PEPA has been dedicated to the music of Madrid. 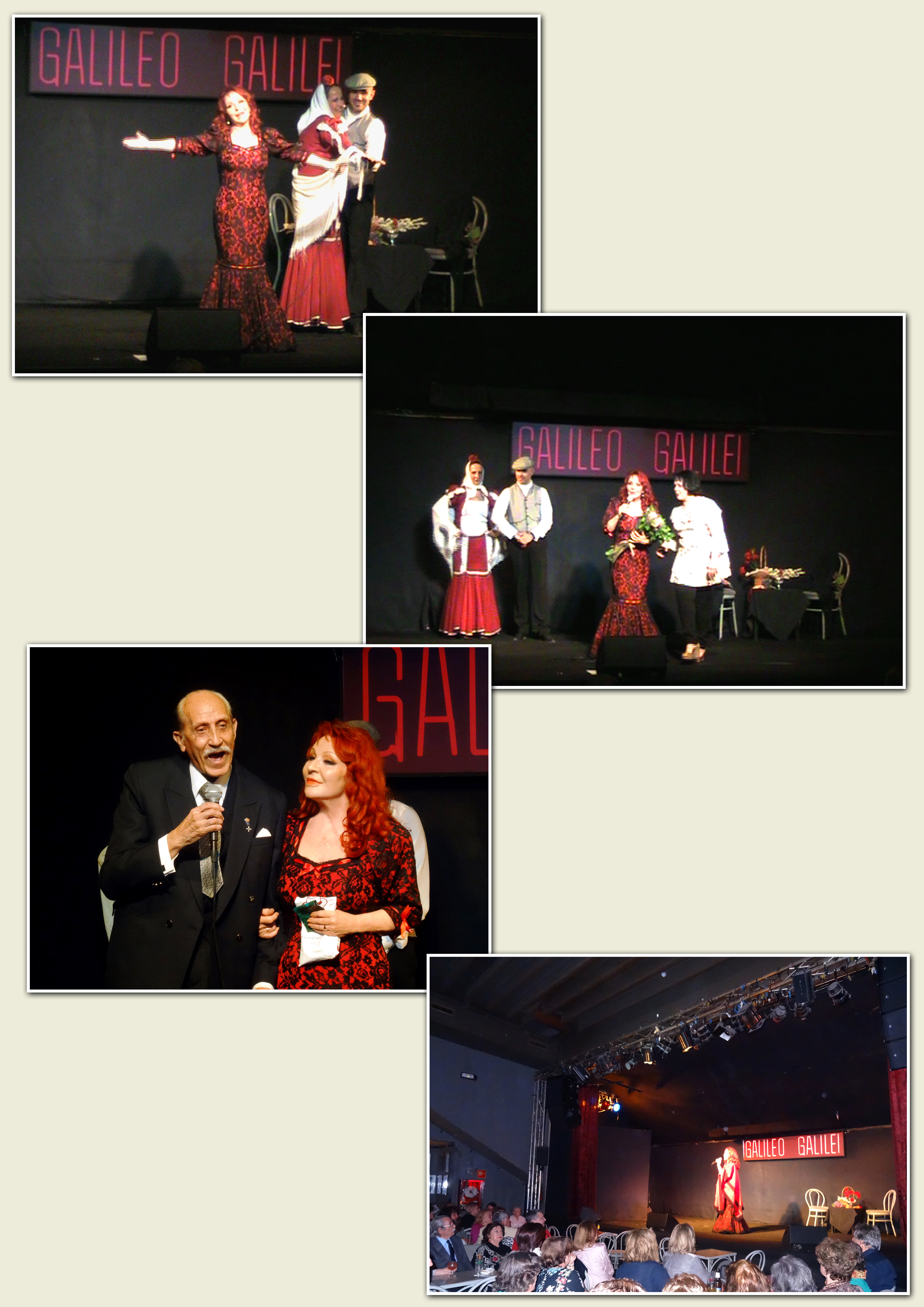 Fantastic concert and fantastic public the one of the square of the Vistillas the day of San Isidro, in Madrid.

Accompanied on the piano by Miguel Tubía, he offered his show full of the most popular songs of the Madrid songbook and did not miss the chotis “bollitos de leche” (composed by Mari Pepa and Gloria Fuertes). The audience participated singing with Mari Pepa.

Jesus Márquez and Cristina Garcia, made a beautiful display of chotis and showed their beautiful work sowing traditions, with the performance of Lucia and Jesus Jr. -his children 9 and 7 years old-, dancing chotis. 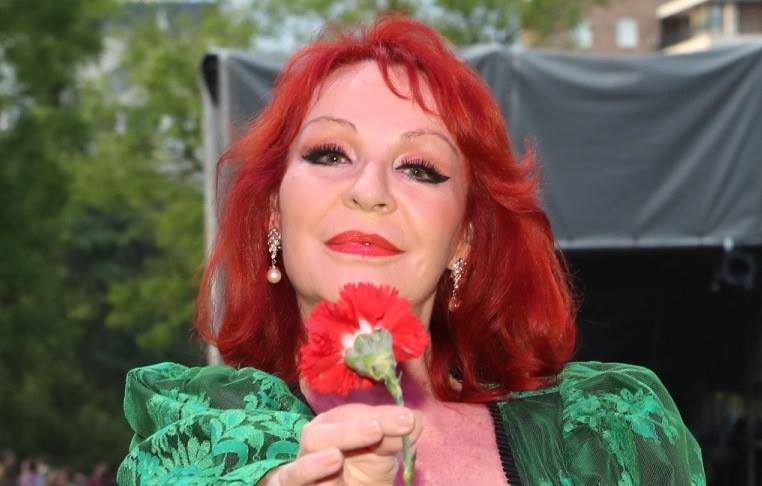 He did it in the prairie of San Isidro, in the place where the mass was celebrated, minutes before the act began.

The song was choreographed by the audience in a very emotional festive atmosphere. 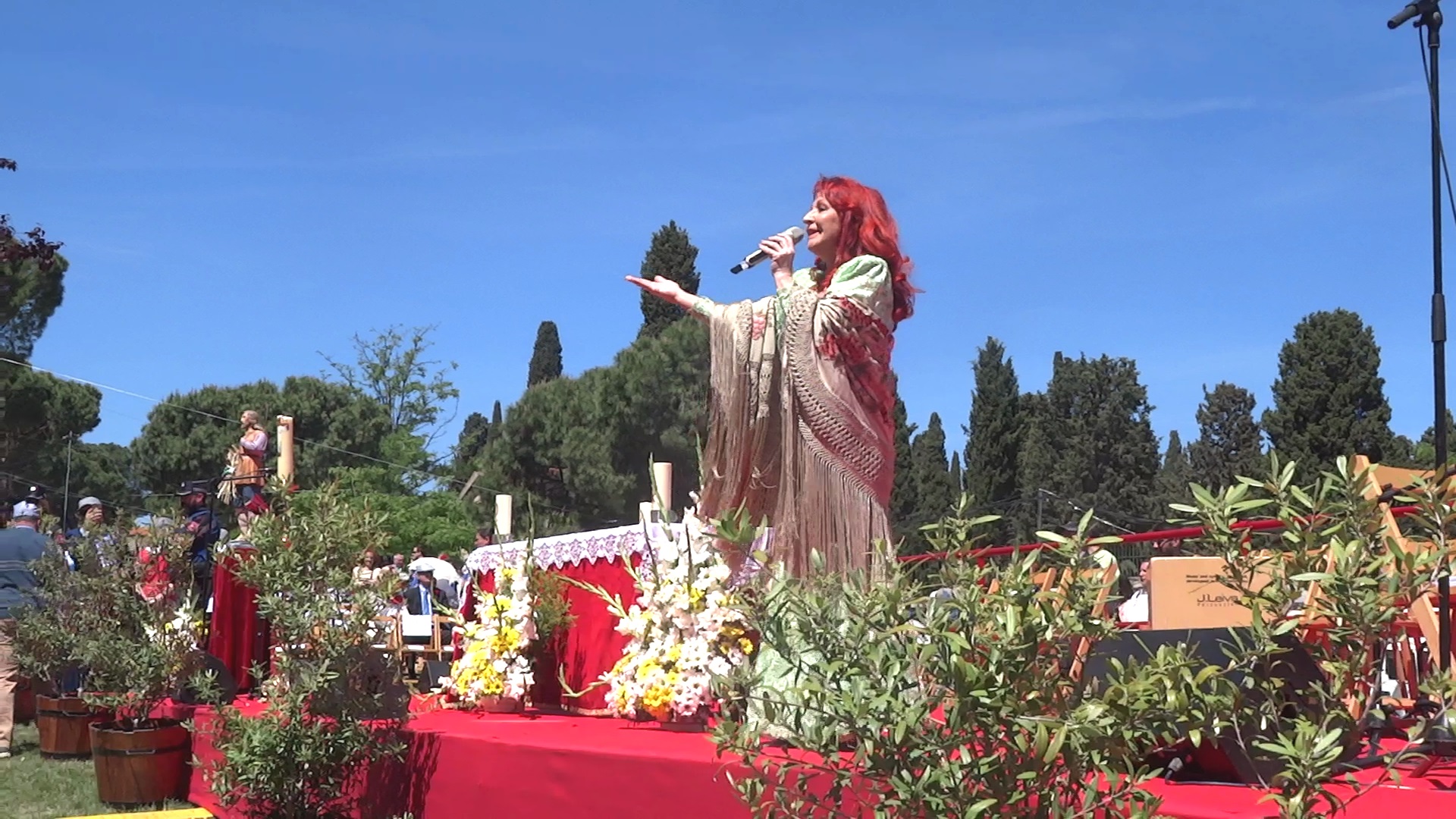 Click on the image to make it bigger and read the entire interview.

An authentic act for everything, the final of the “Olga Ramos” chotis Competition of the Community of Madrid and some well-deserved prizes. A wonderful and dedicated audience that has made me feel very, very comfortable. Congratulations to the winners! 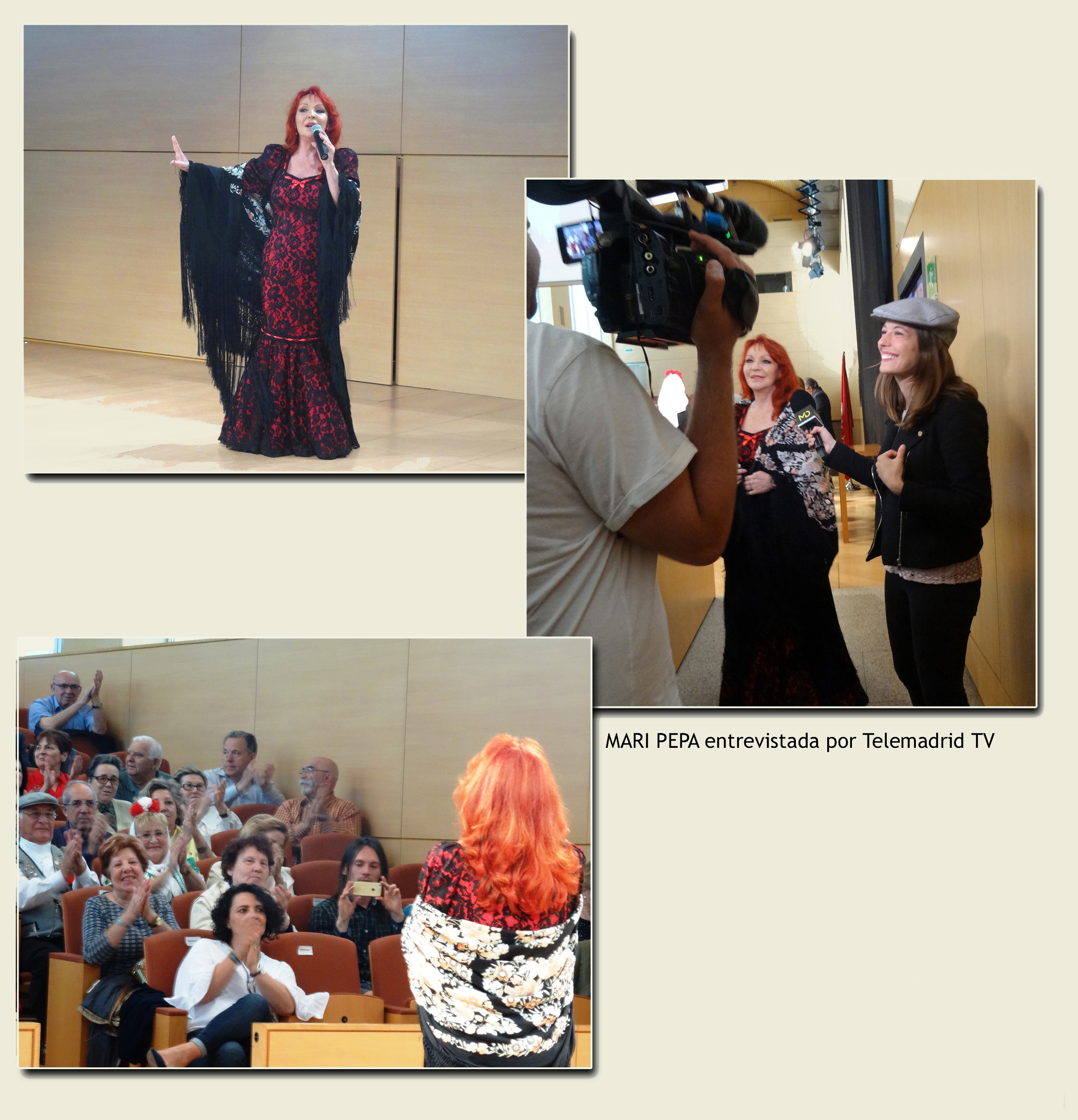 In the Rosaleda del Parque del Oeste, at the presentation ceremony of the San Isidro Festival 2018.

Some images of the act with the Mayor of Madrid, the president of the Federation of Traditional Groups of Madrid and friends of castizas groups, who do so much to maintain the traditions of Madrid.
My love and respect for them. 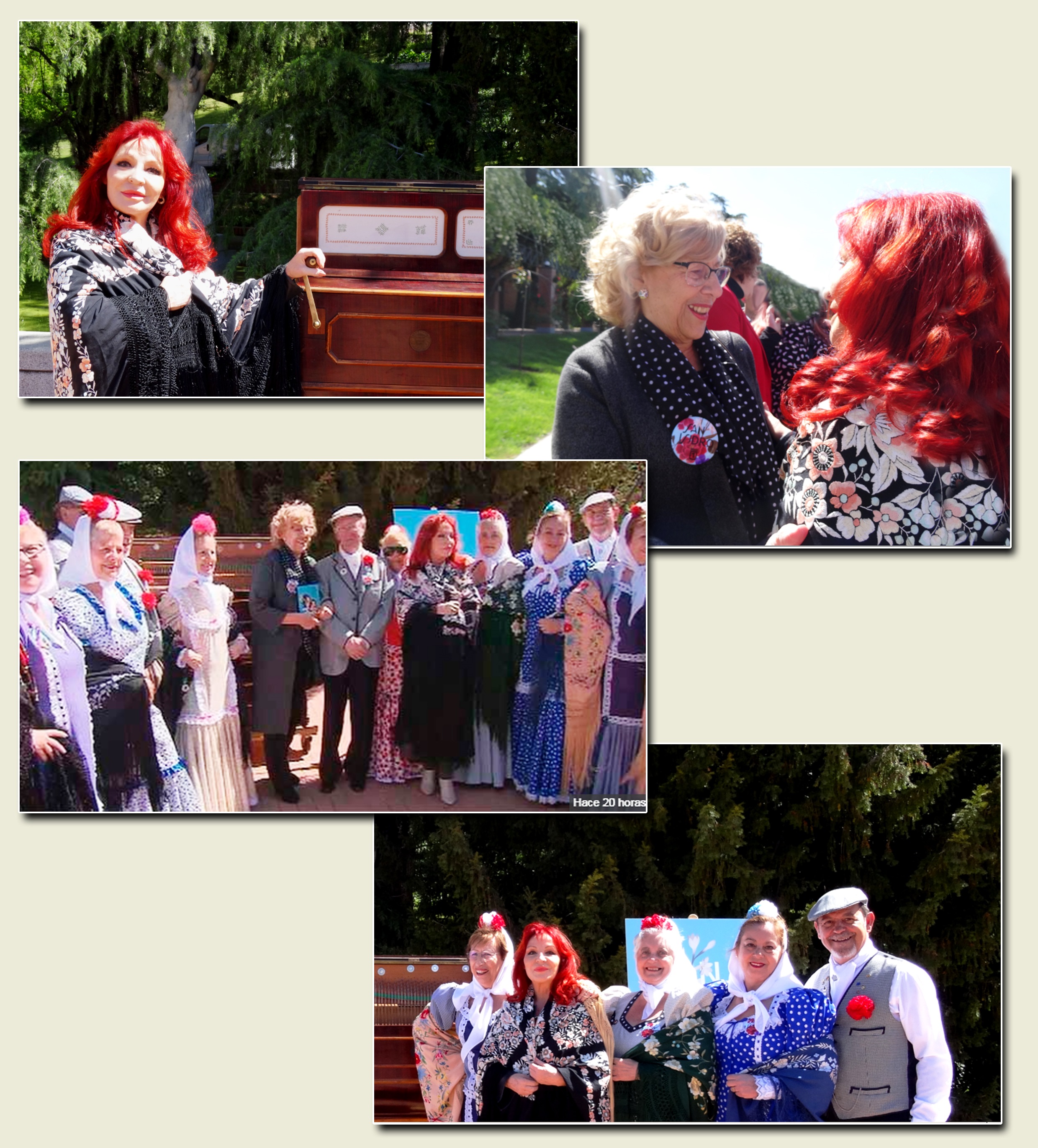 A very endearing act in which, Ballesol delivered to the Aladina Foundation, funds raised to fight against childhood cancer. 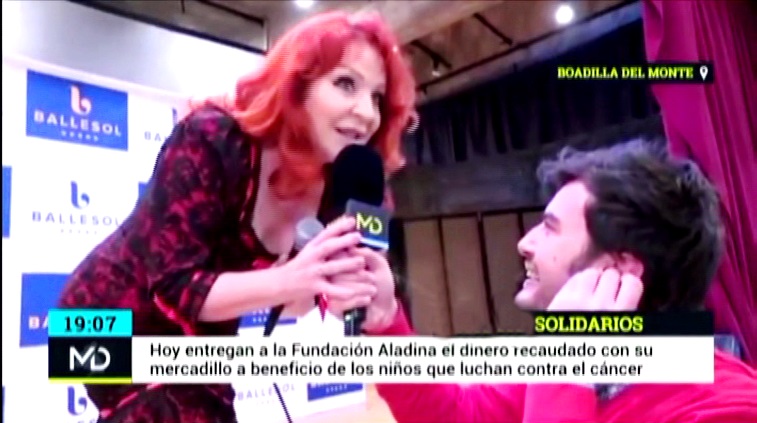 The Solidarity Festival Homage to Rosa María Lobo was a resounding success. A very emotional concert that filled the Buero Vallejo theater full of joy and emotions, overflowing with the public. 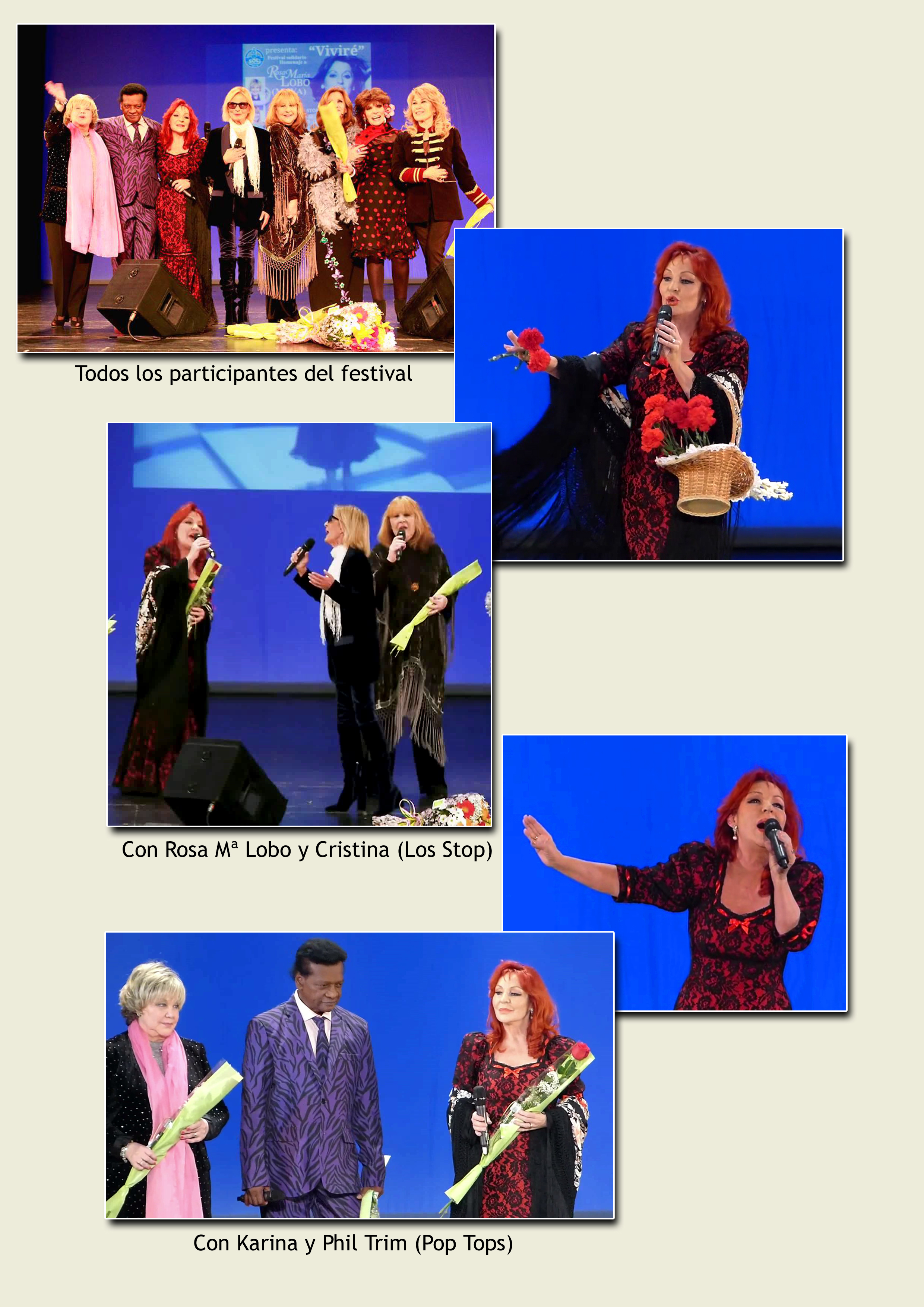