On the day of the official Patroness of Madrid, Our Lady of La Almudena, Mari Pepa sang the Salve at the entrance to the Cathedral. There were some of the ecclesiastical and political personalities, traditional groups, and media. 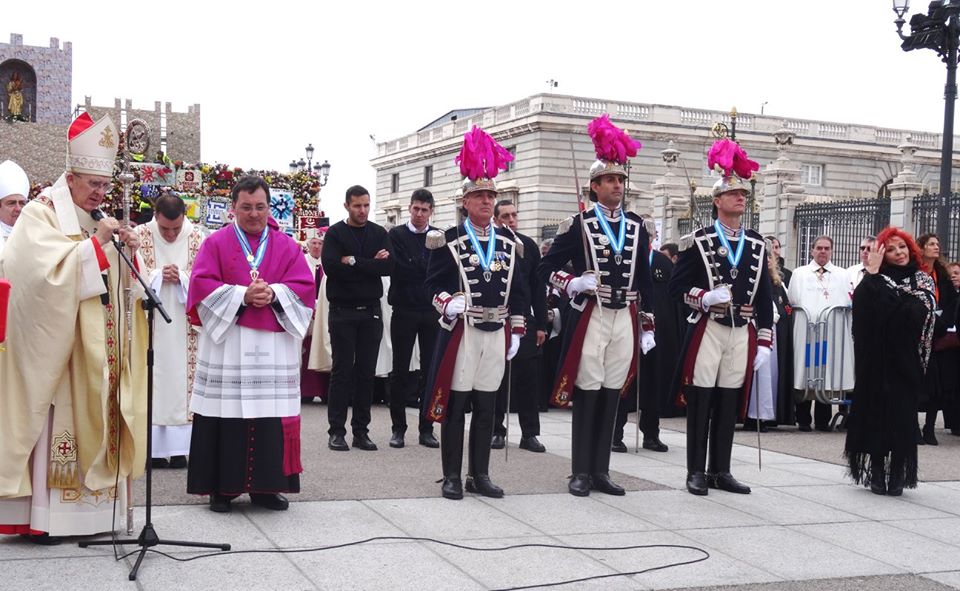 Mari Pepa was on the Telemadrid program «Está Pasando» and sang the song «Salve, Almudena» composed by her. 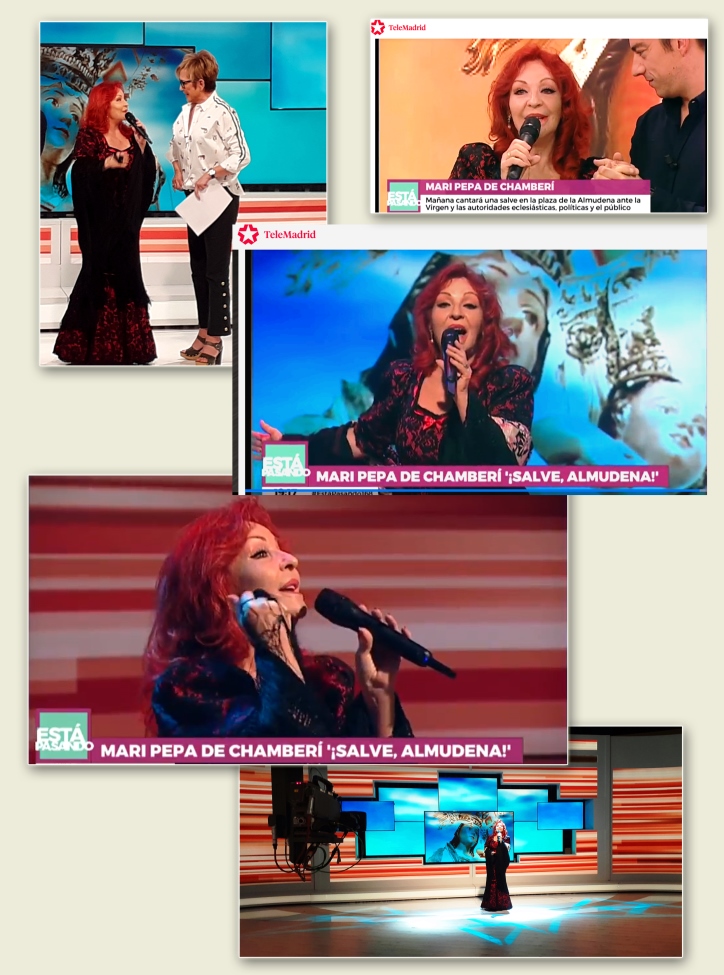 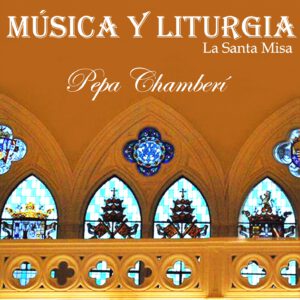 Mari Pepa concert in Colmenar Viejo, accompanied by Miguel Tubía at the piano. Elena García and Alfredo Povo offered a beautiful exhibition of chotis, pasodoble and other rhythms. A great audience! 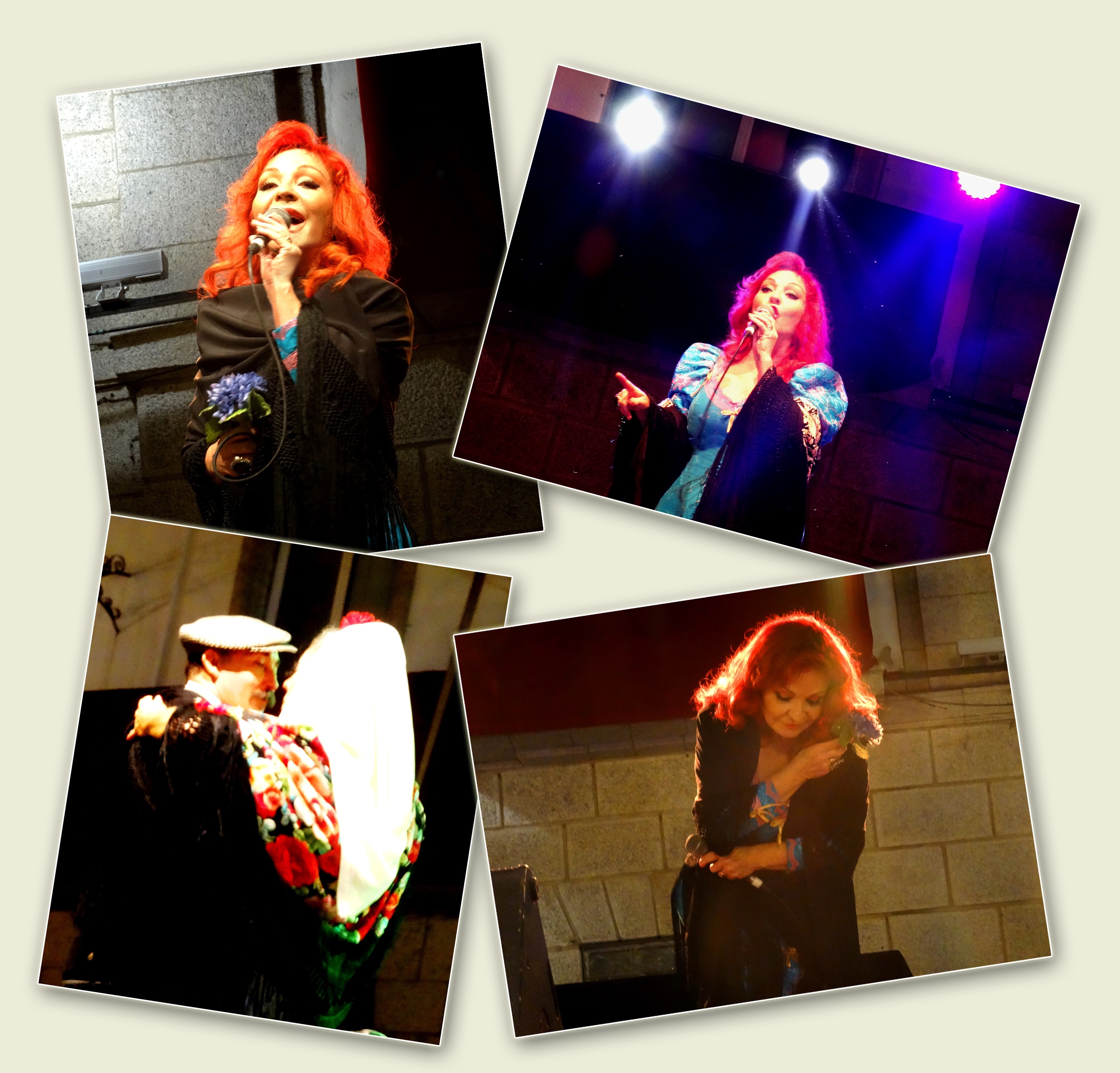 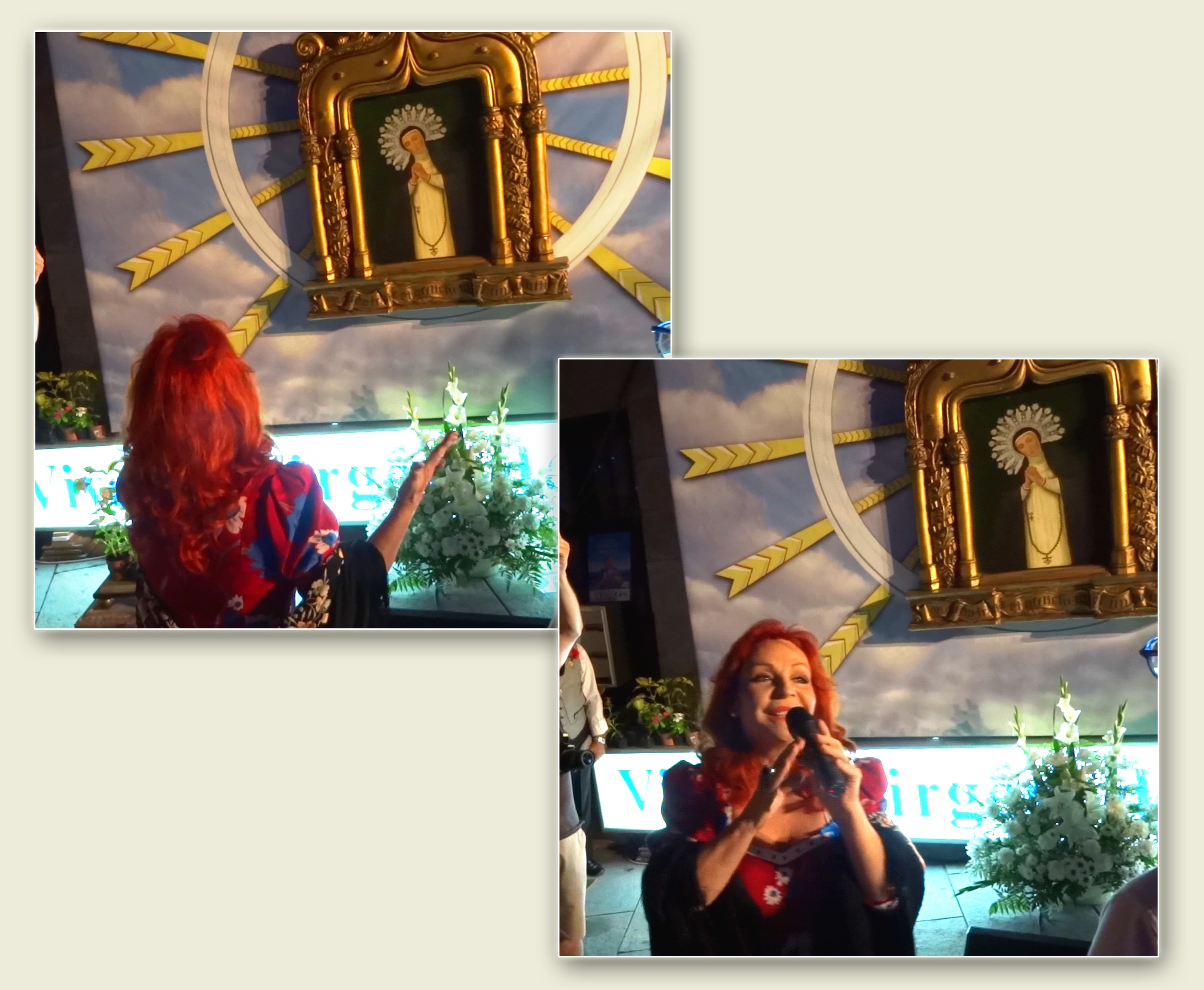 MARI PEPA interviewed for the program «Está pasando» of Telemadrid TV, giving to know one of the songs that form part of her last musical work «MÚSICA Y LITURGIA- La Santa Misa»,

This was in the parish of La Paloma in Madrid. 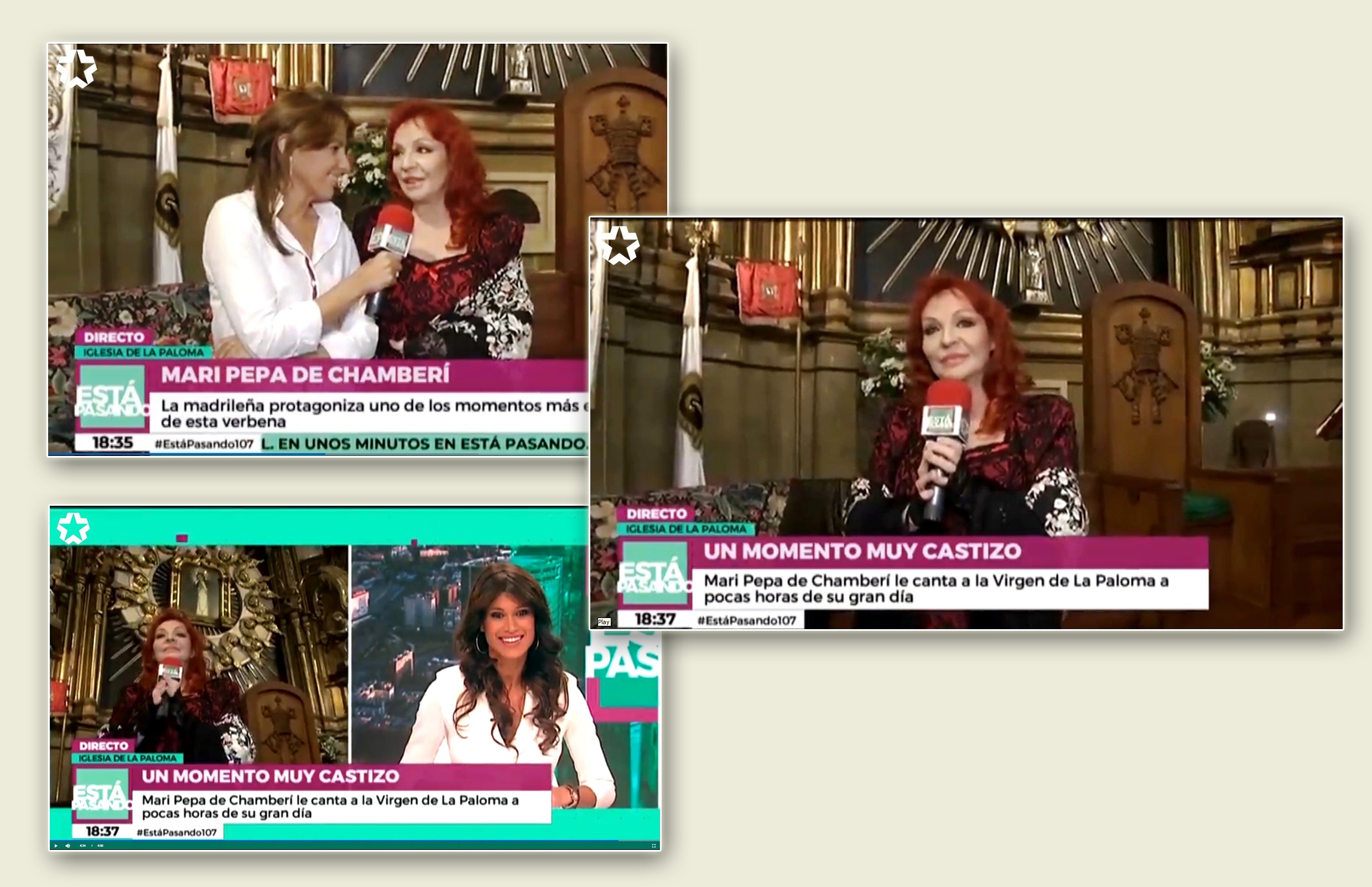 Last August 11, «Día de los Castizos», during the celebration of Holy Mass in the church of La Paloma (Madrid), MARI PEPA interpreted the songs for the Holy Mass of his latest musical creation «Música y Liturgia» (Music and Liturgy), which consists of ten themes of his authorship.

She was accompanied by the choir of La Paloma. 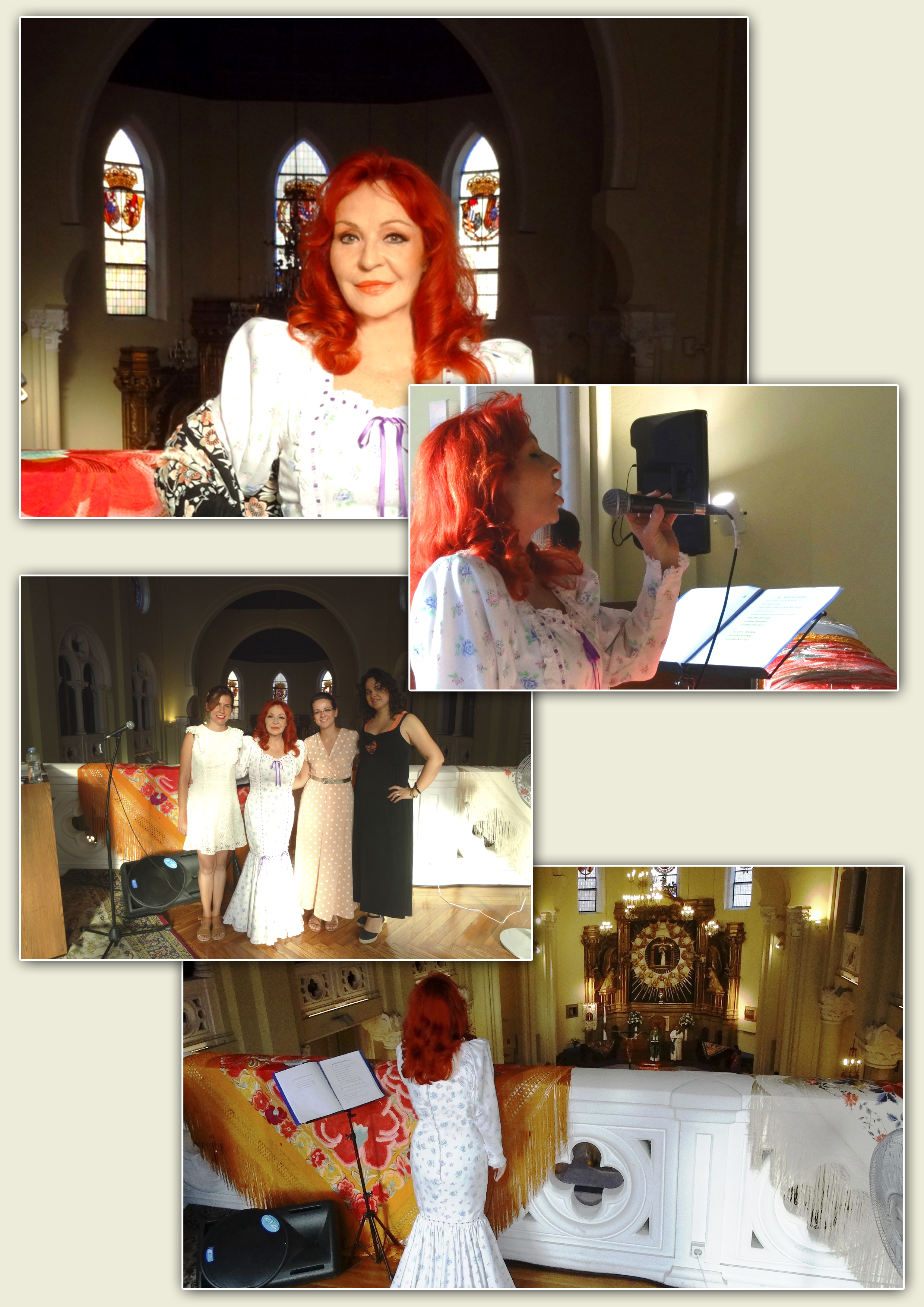 After the Holy Mass, the «II Contest of Chotis Virgen de la Paloma» was celebrated, organized by the Parish of La Paloma with the collaboration of the Federation of Traditional Groups of Madrid, which was very successful since many participants and public attended.

MARI PEPA was part of the jury. 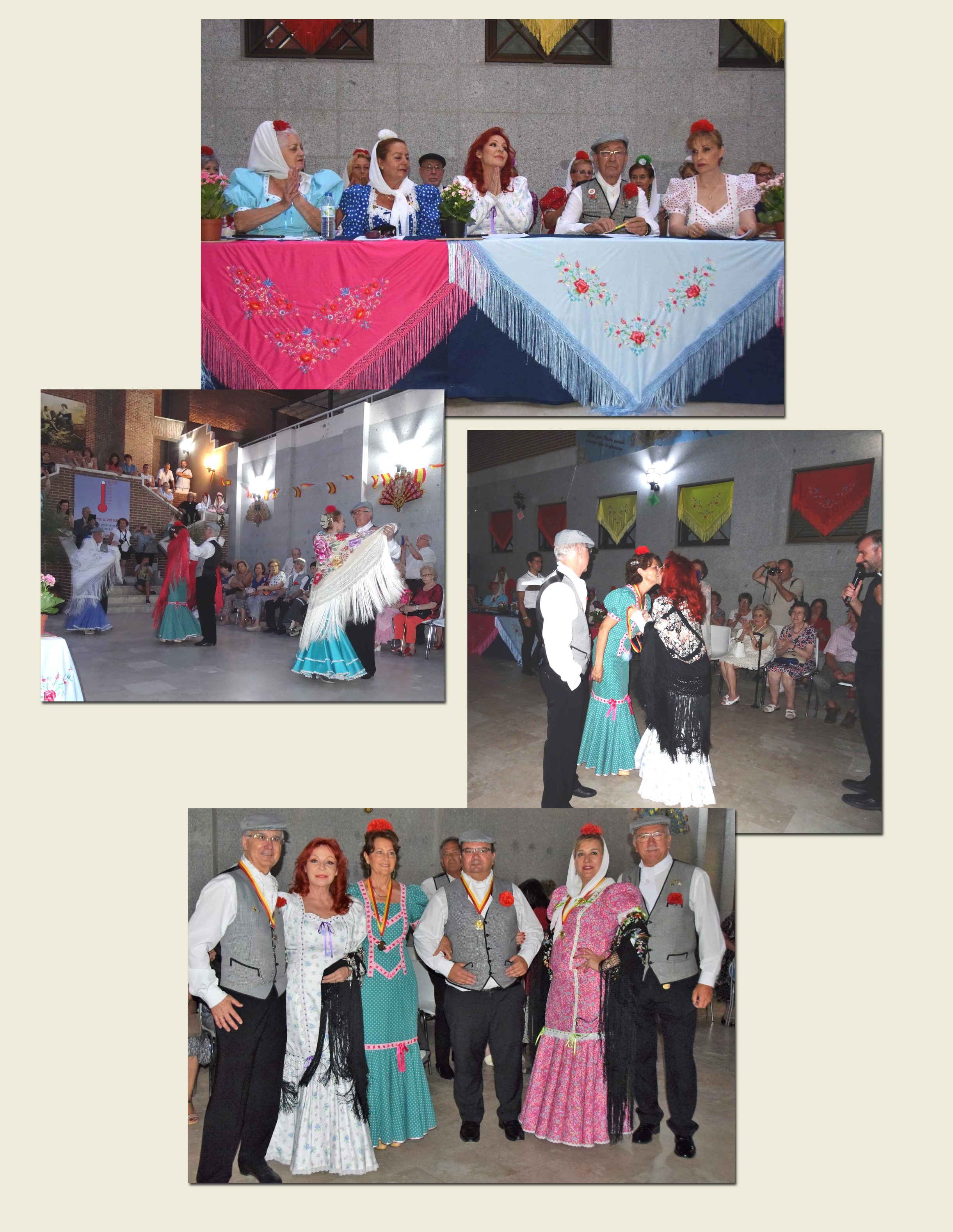 Mari Pepa de Chamberí premiered her last composition «MUSIC and LITURGY» – songs for Holy Mass, in the parish of Virgen de la Paloma and San Pedro el Real in Madrid, with numerous audiences of which she received many congratulations for her work. 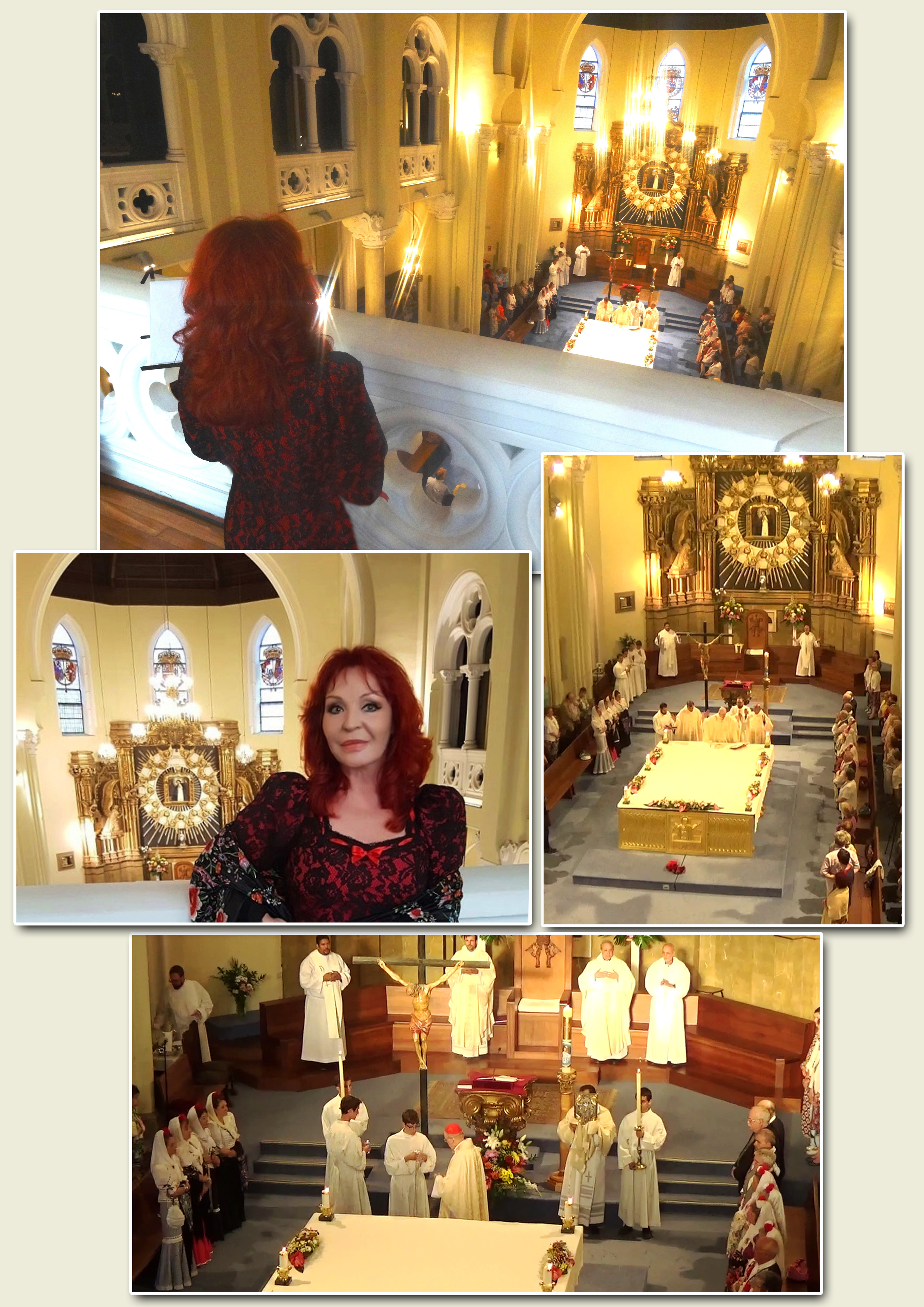 Accompanied by the chorus of the parish of La Paloma, Mari Pepa was dismembering the nine songs that compose the work, which was welcomed by the attendees with expectation, giving her permission in an affectionate way. 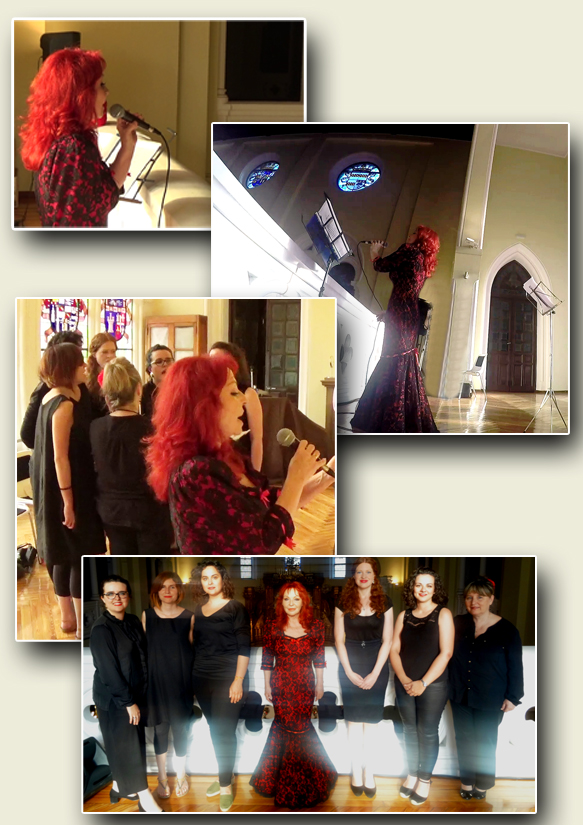 The Cardinal Archbishop of Madrid, Mr. Carlos Osoro who presided over the Eucharist, during the homily spoke of the work of Mari Pepa in a very positive way and before the end of the Mass he asked for an applause for her, who received it with great emotion, along with the six people who had accompanied her in the choirs. 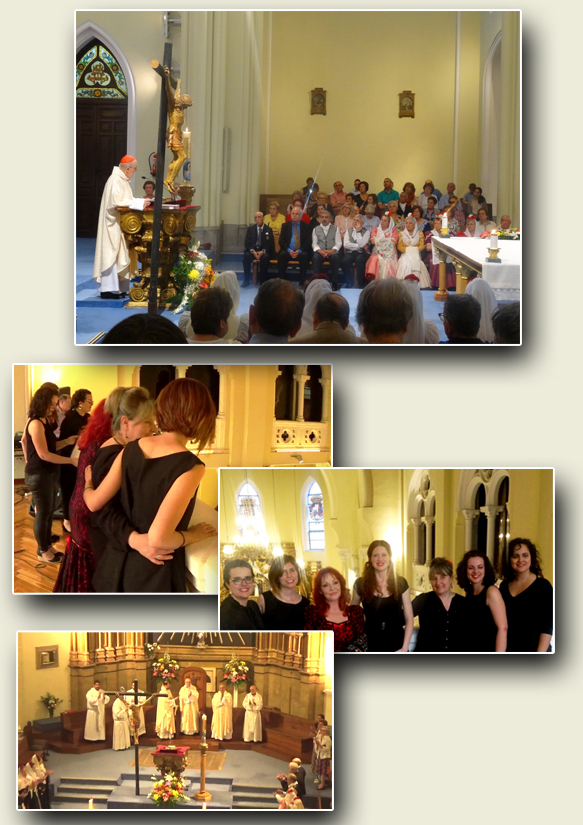 At the end of the Mass, with the Cardinal Archbishop of Madrid, Mr. Carlos Osoro and the parish priest of the Church of La Paloma and San Pedro el Real D. Gabriel Benedicto. 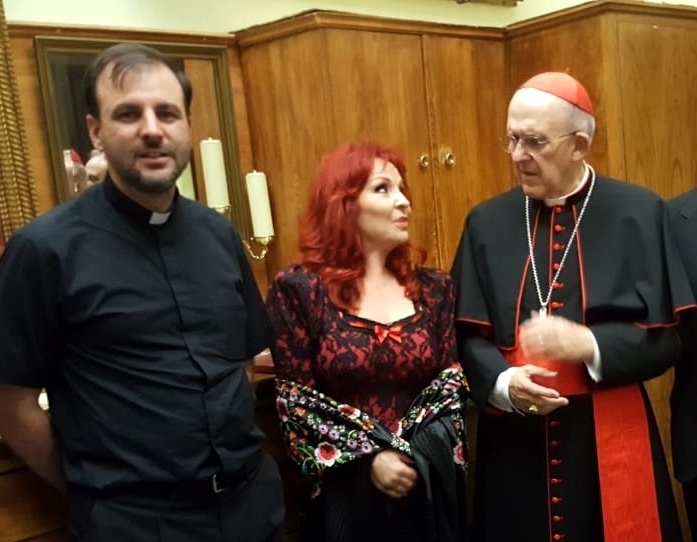 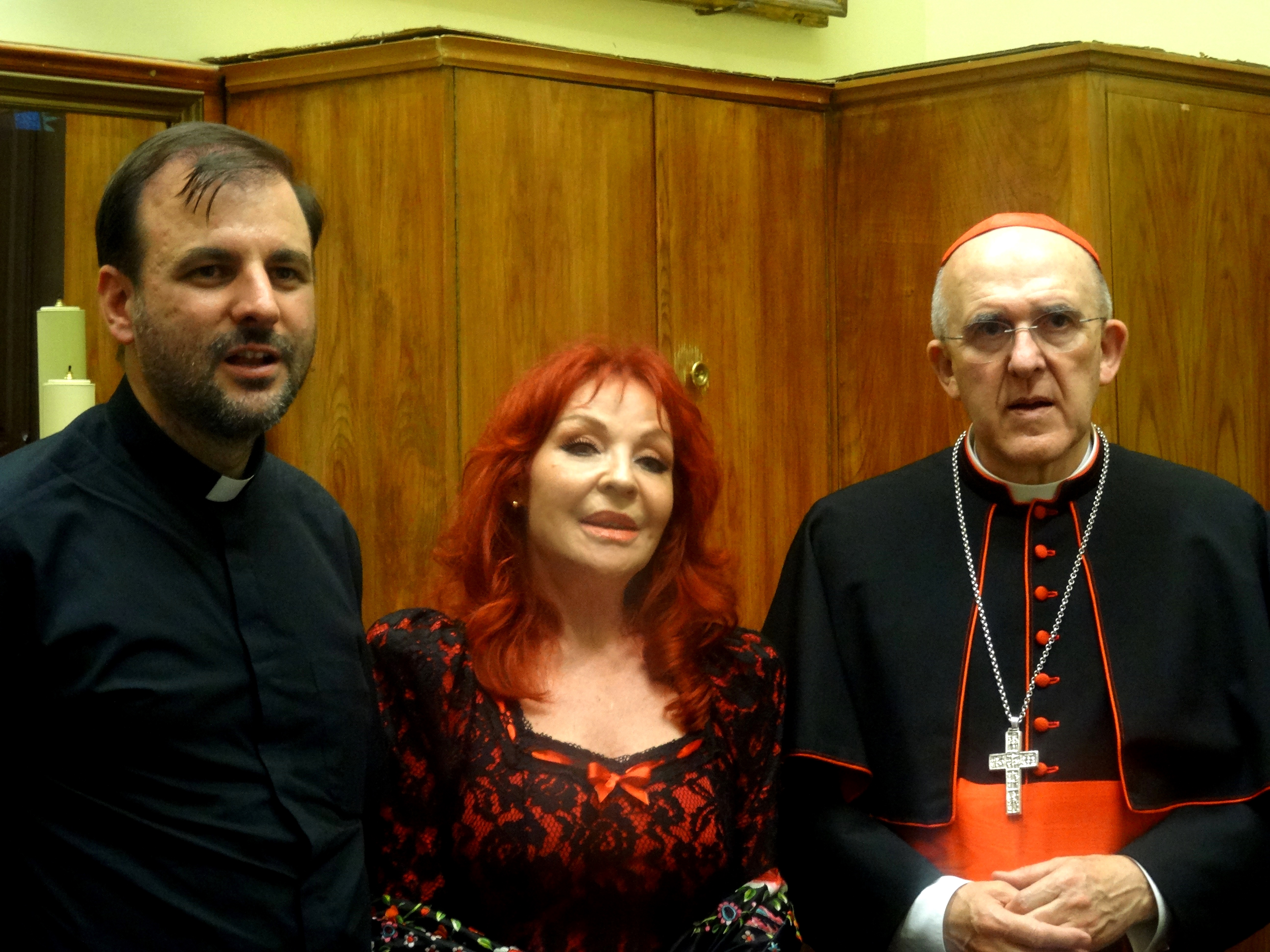 Link of Archdiocese of Madrid with information of the event:

Concert «Así es Madrid», which was attended by a great audience that filled the room and participated with great joy and good voices, singing with Mari Pepa all the refrains of the popular songs that he offered during the concert.

A success in this first performance of Mari Pepa at the Center. 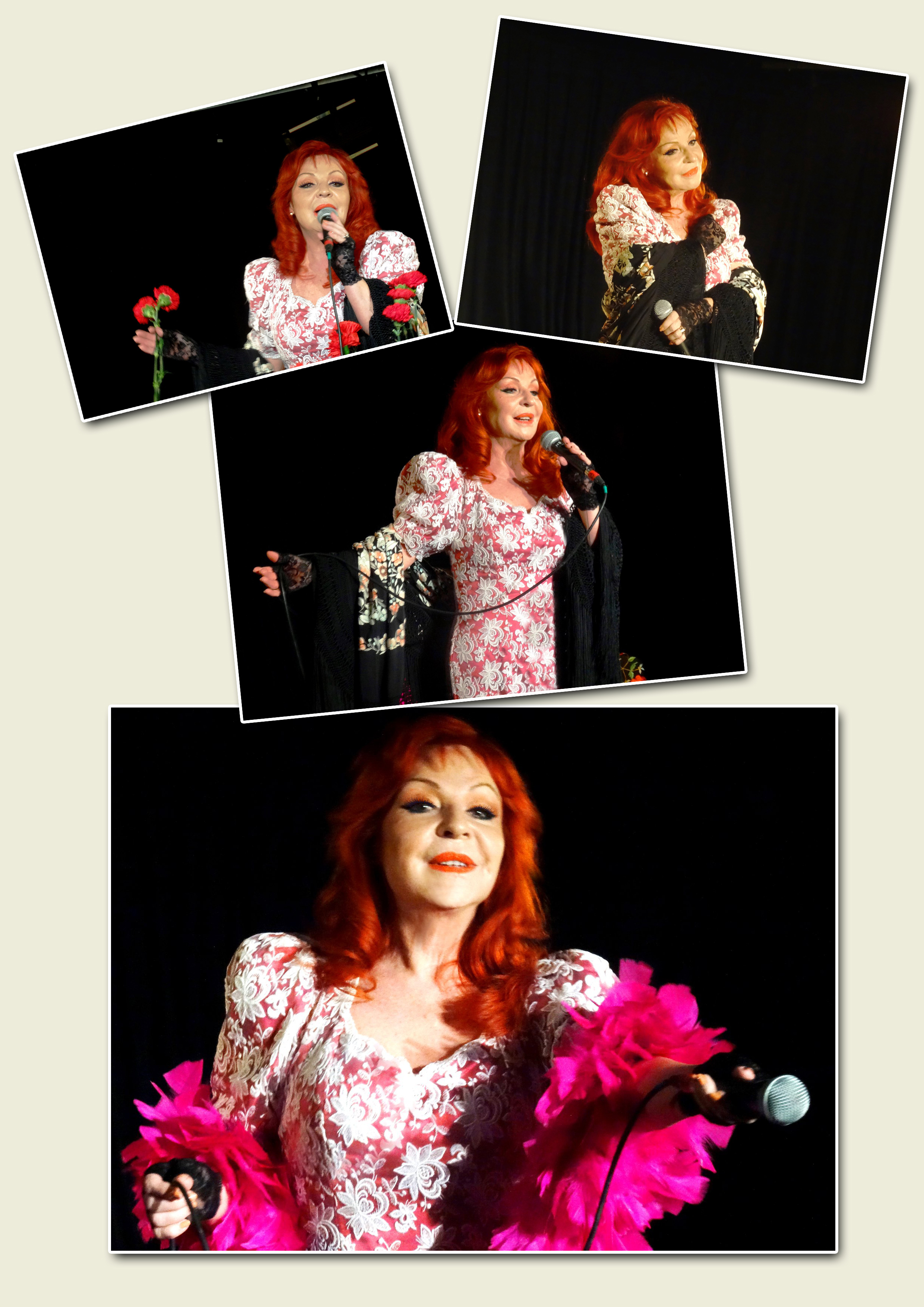 The MARI PEPA concert was a success, with its show «De la Mancha a Hollywood» in homage to Sara Montiel; in which he received the affection and admiration of the Madrid public.

With full crowded in the Plaza de las Vistillas, the show began.

Mari Pepa, accompanied on the piano by Miguel Tubía, performed classics by Sara Montiel such as «Fumando espero», «Balancé», «El polichinela» and others.. 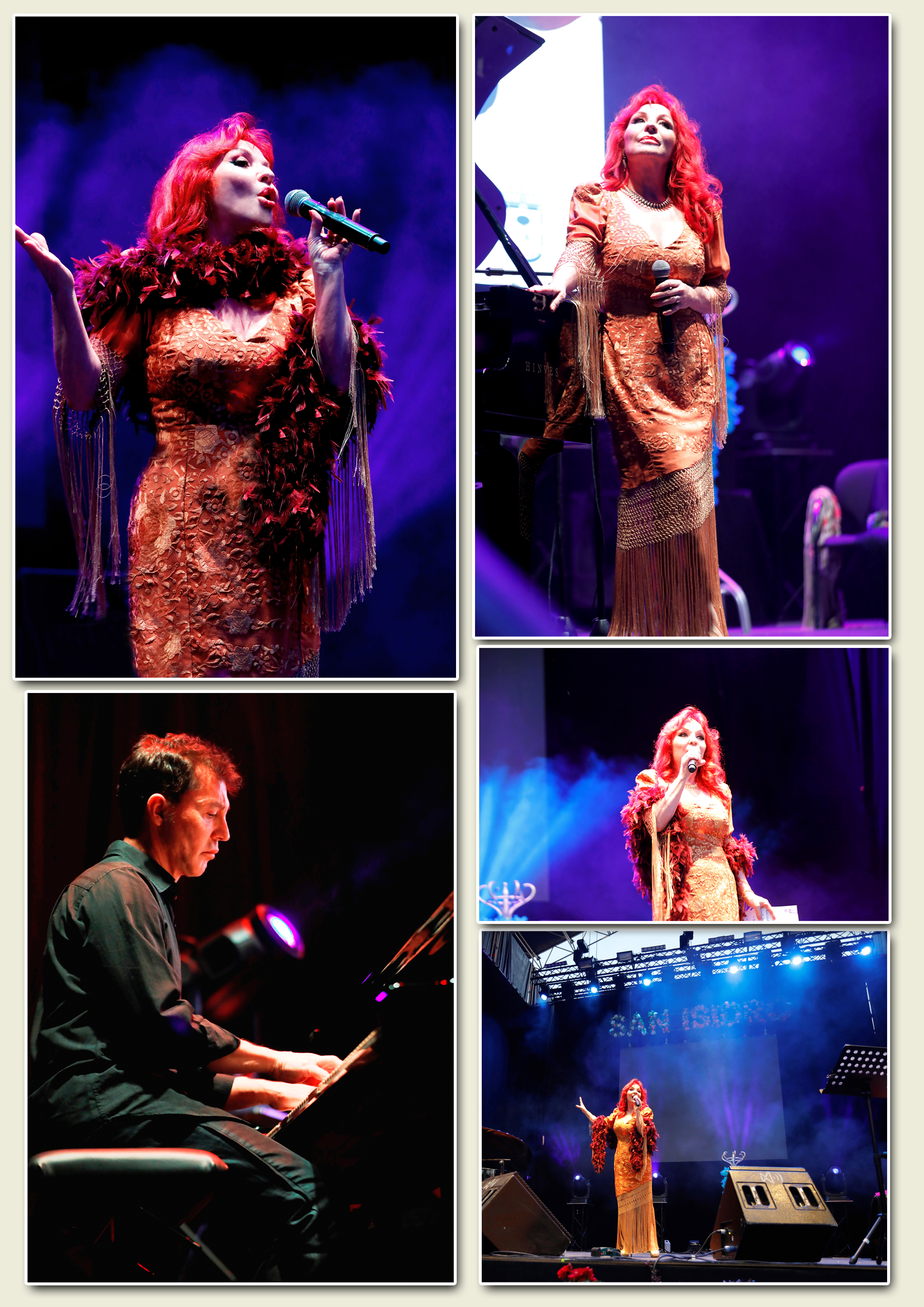 Singing a stanza of «Tatuaje», Mari Pepa gave way to Alberto Vázquez, actor and singer who played the complete song

Later Alberto sang the song «Ojos verdes», being very applauded on both occasions.

And between cuplés and comments of Mari Pepa on the great diva, we arrived at an unexpected moment, in which it interpreted with Alberto Vázquez the song «Noche de ronda».

A beautiful duet evoking the romantic scenes of Sara Montiel’s films, which was very applauded by the public. 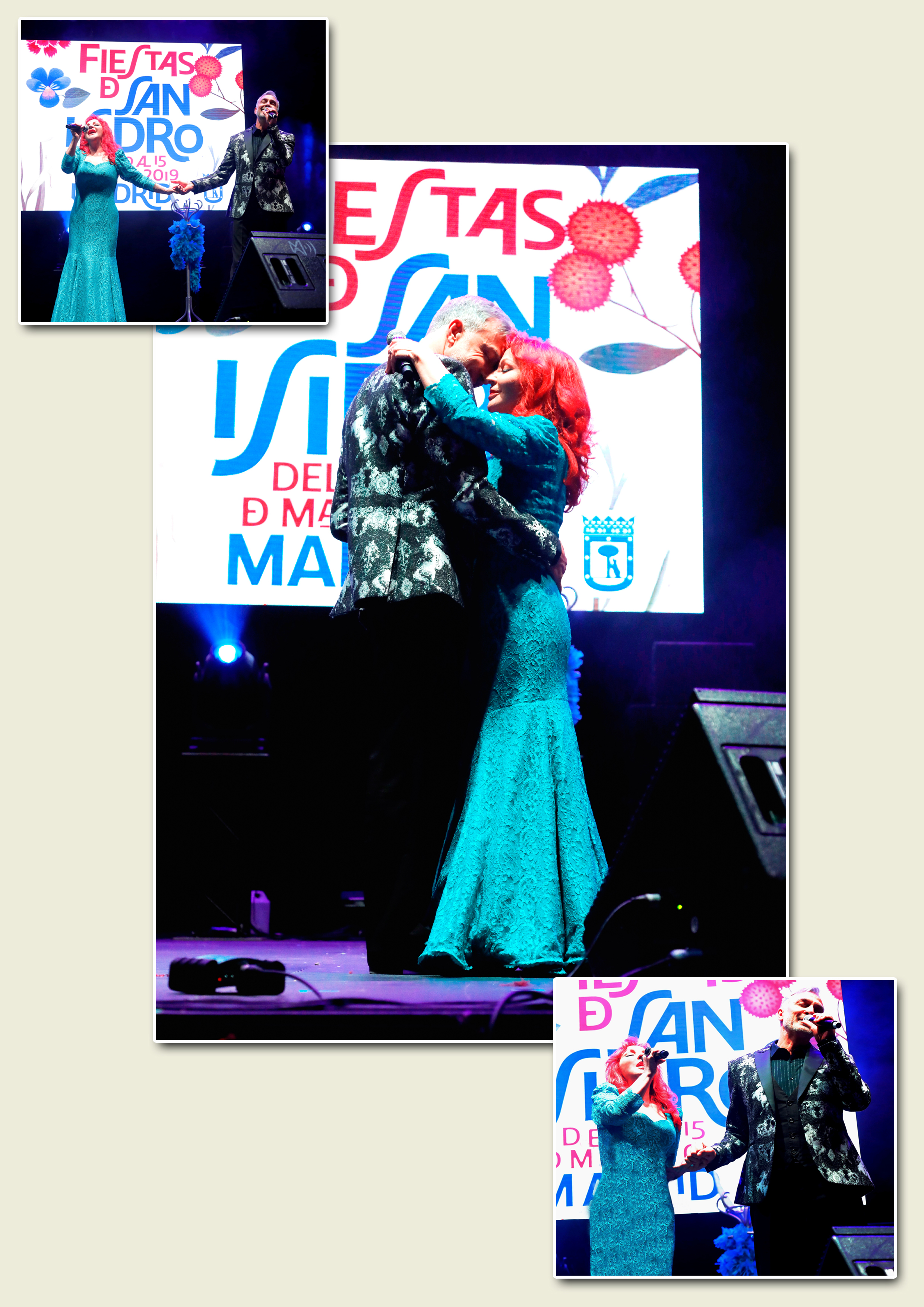 Mari Pepa in the second part of the show, continued with songs that reminded us of the great Sara Montiel, like «Nena», «Y tú, no eres éso», «El relicario», «La Violetera» … 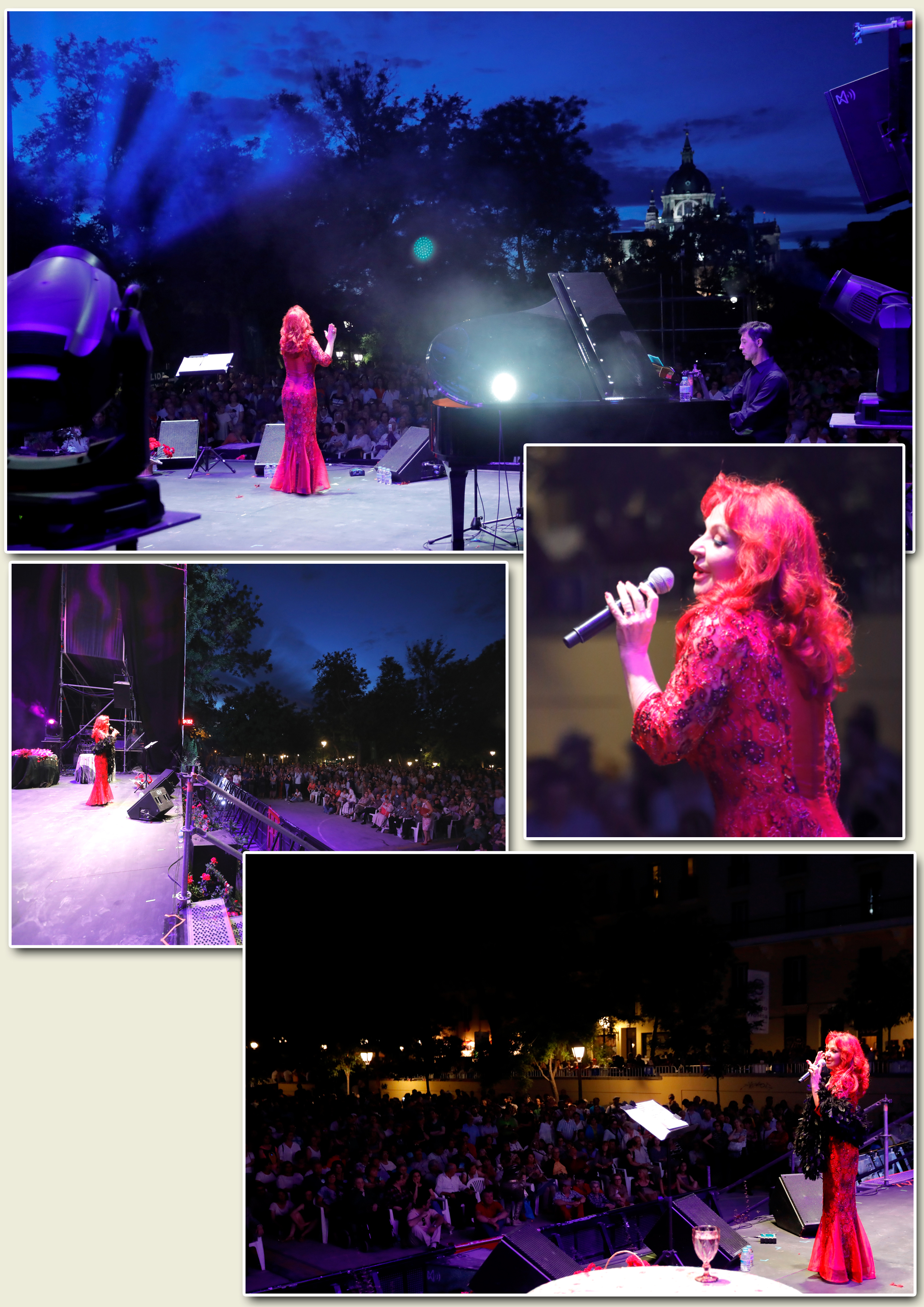 The concert-homage to Sara Montiel, ended when Mari Pepa, attended an encore of the audience and, with a fixed image on screen of Sarita, Mari Pepa sang «Los nardos» accompanied by the choirs of the public, in a cheerful, intimate and very participative. 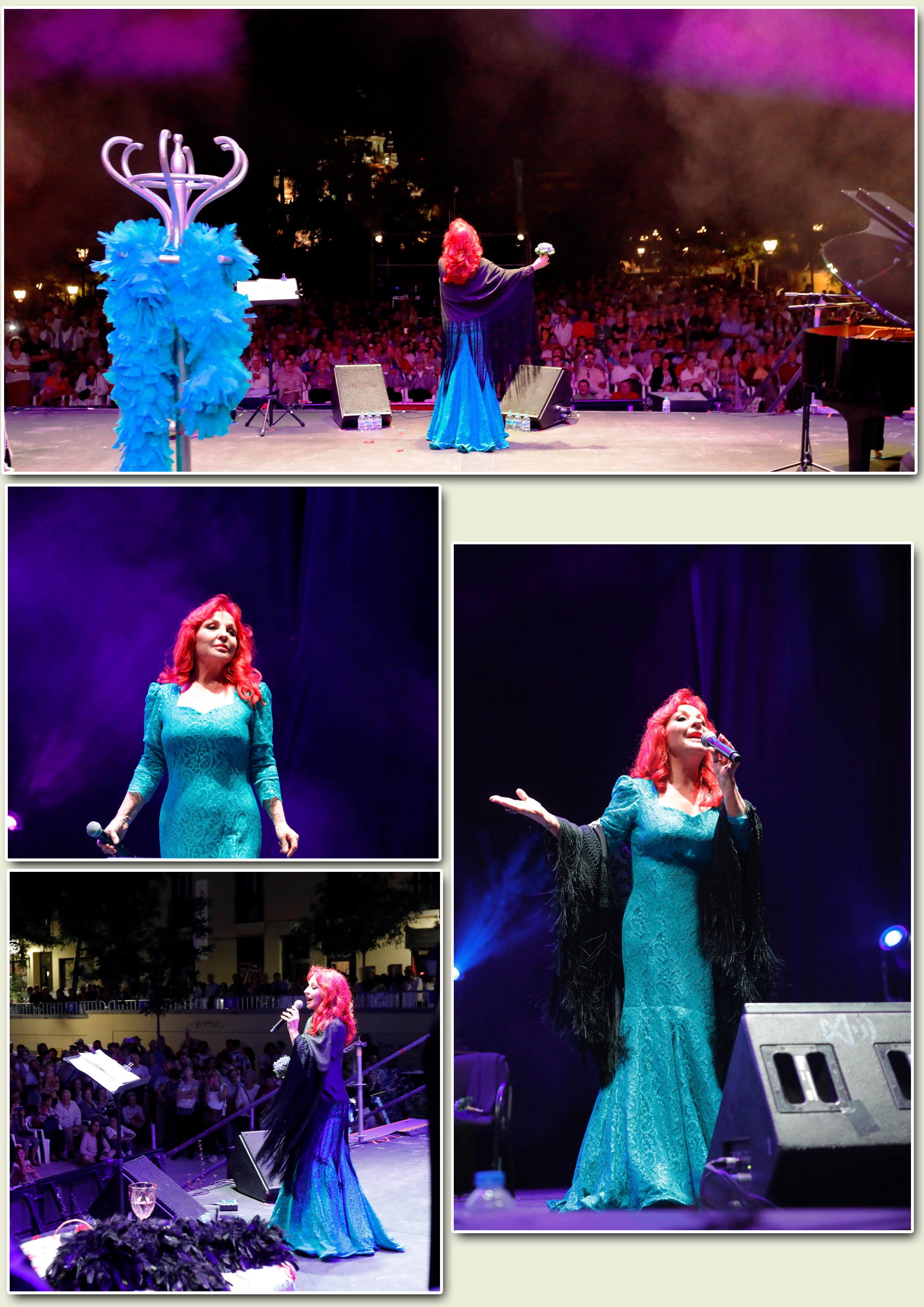 Mari Pepa, from the hand of Miguel Tubía and Alberto Vázquez thanked the audience for their applause and affection. 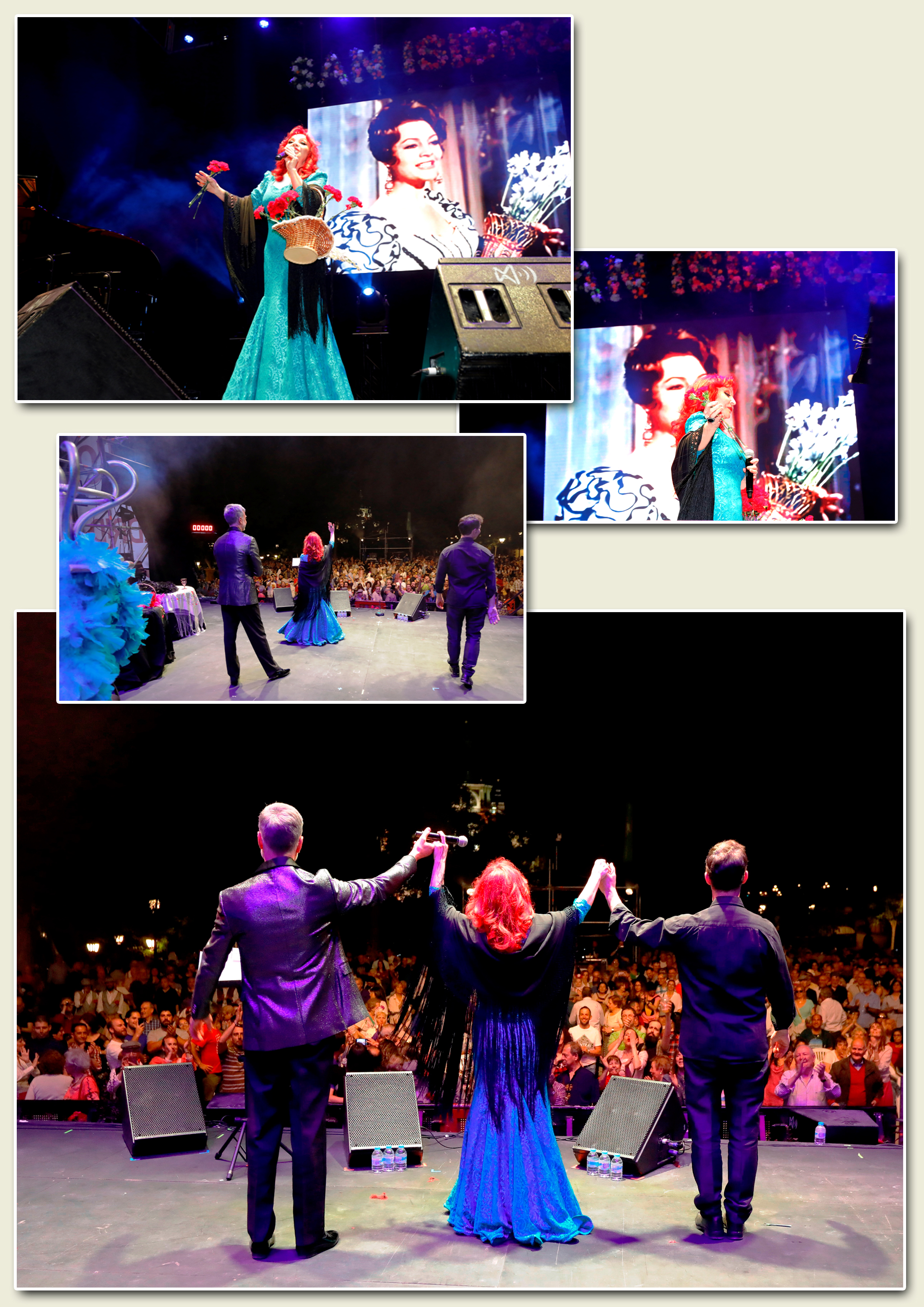 Concert «ASÍ ES MADRID» in the Cultural Center Agata (Madrid), with great success of public, in a very friendly and very participatory atmosphere. 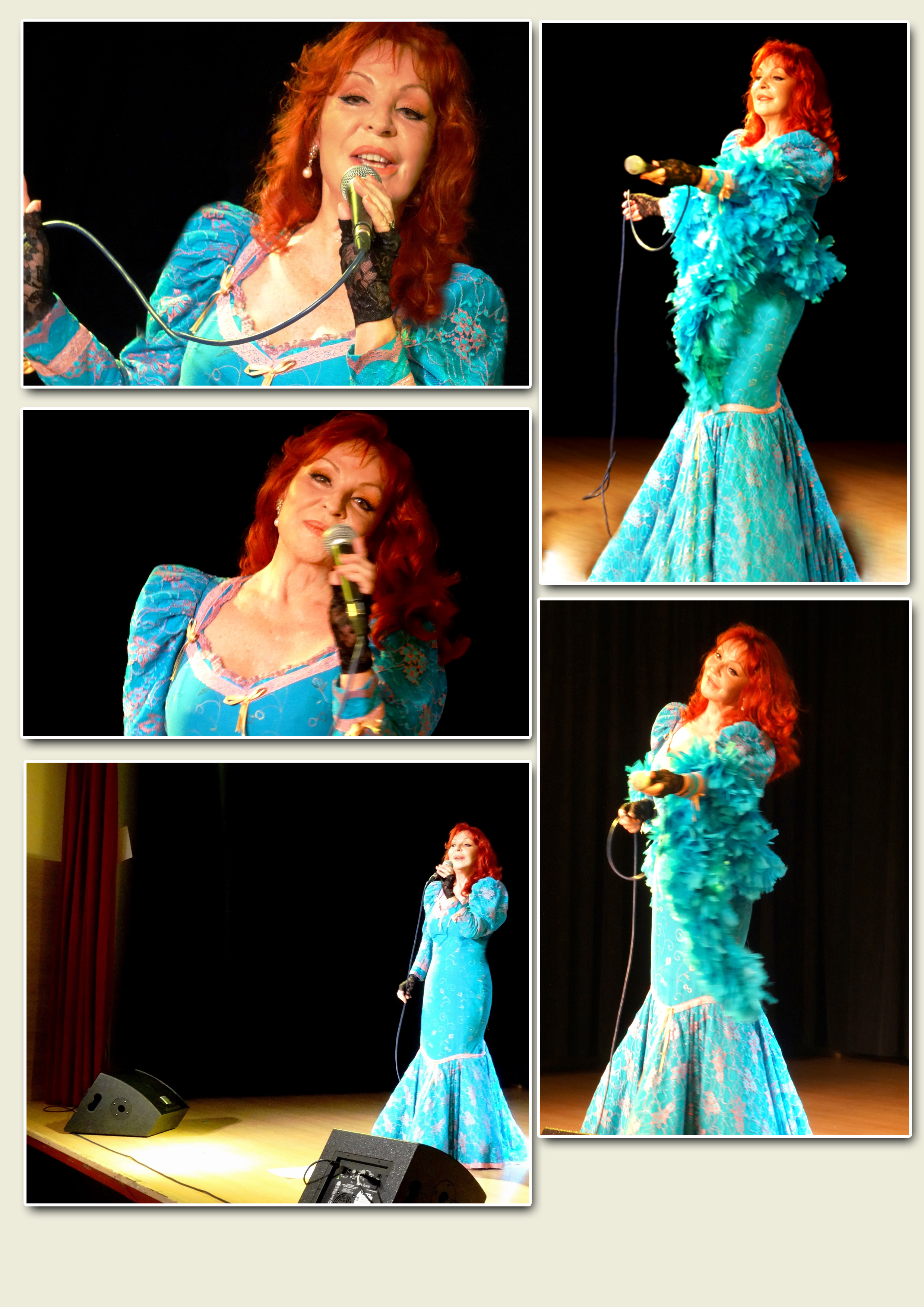 Concert in the premises of the Book Fair in Vallecas.

Accompanied at the piano by Isaías Martín and with the masterful exhibition of chotis and pasodobles by Esther and Jesús Márquez, a concert took place with very traditional themes that made the audience much enjoyed, who sang with MARI PEPA a large part of the show.

Popular music for a popular neighborhood of Madrid, in its 3rd edition of the Book Fair 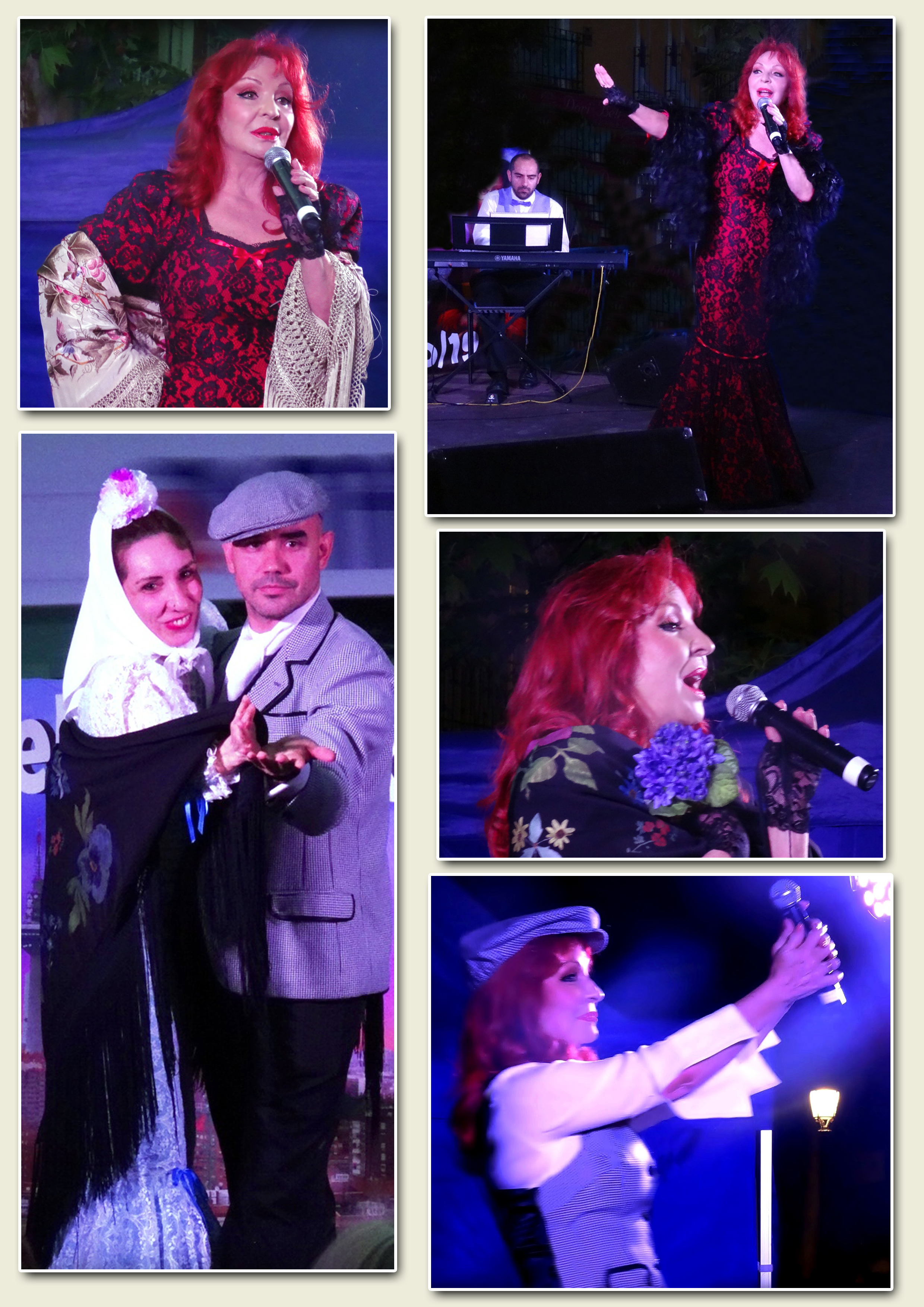 April, 27 / 2019 – Tributes by Federation of Traditional Groupa of Madrid

Tribute to the Infanta Isabel «la chata» in the Pº de Rosales (Madrid), organized by the Federation of Traditional Groups of Madrid attended by castizas groups, other groups and a large audience. The municipal band of Madrid also intervened.

MARI PEPA intervened with a few words and interpreted the chotis «Madrid» a cappella. 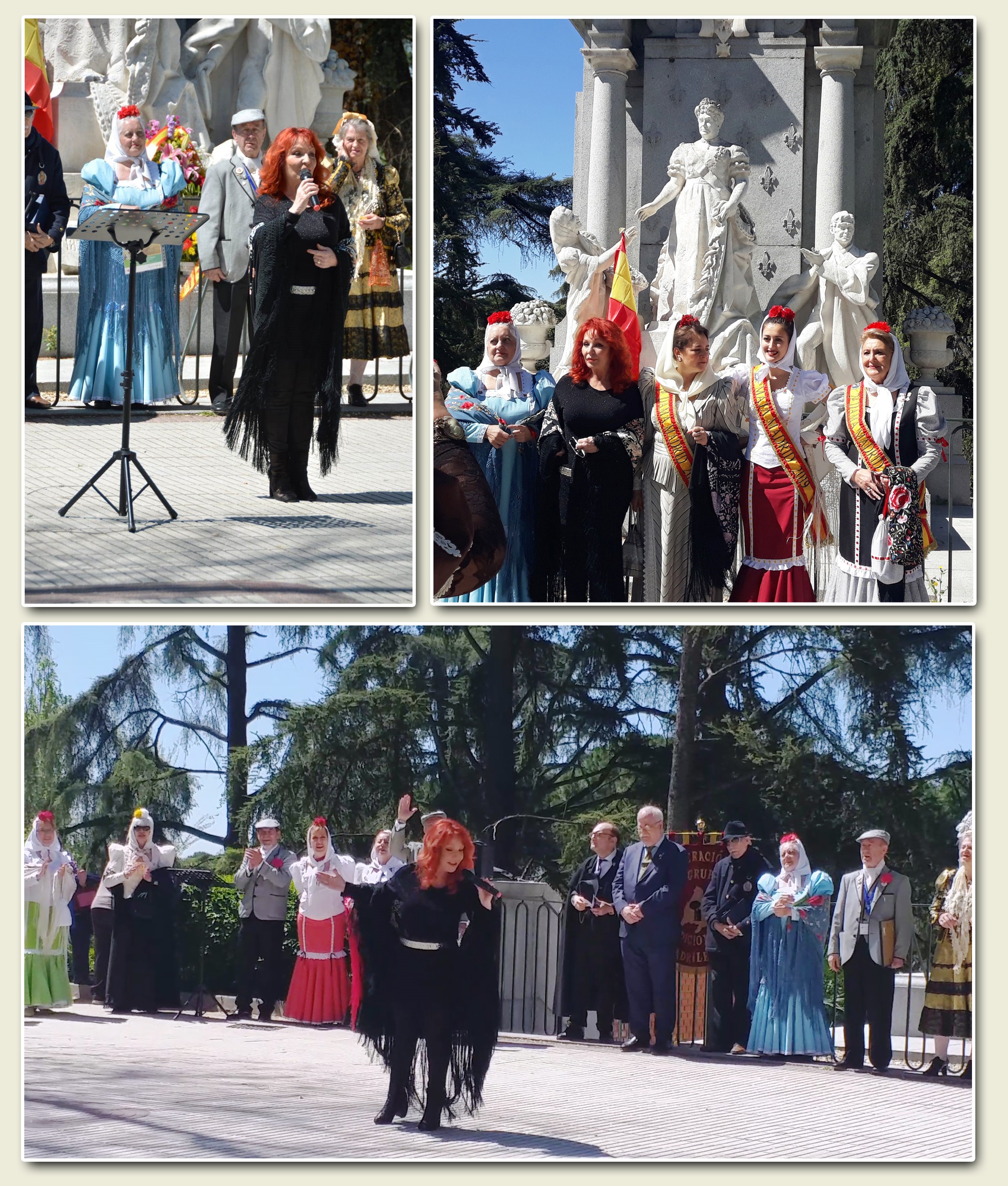 In the afternoon the Federation of Traditional Groups of Madrid, in a very emotional and endearing, made a tribute to MARI PEPA and gave him a diploma and pin of the federation, for his dedication and support as a singer and songwriter to maintain and disseminate the Madrilenian traditions. 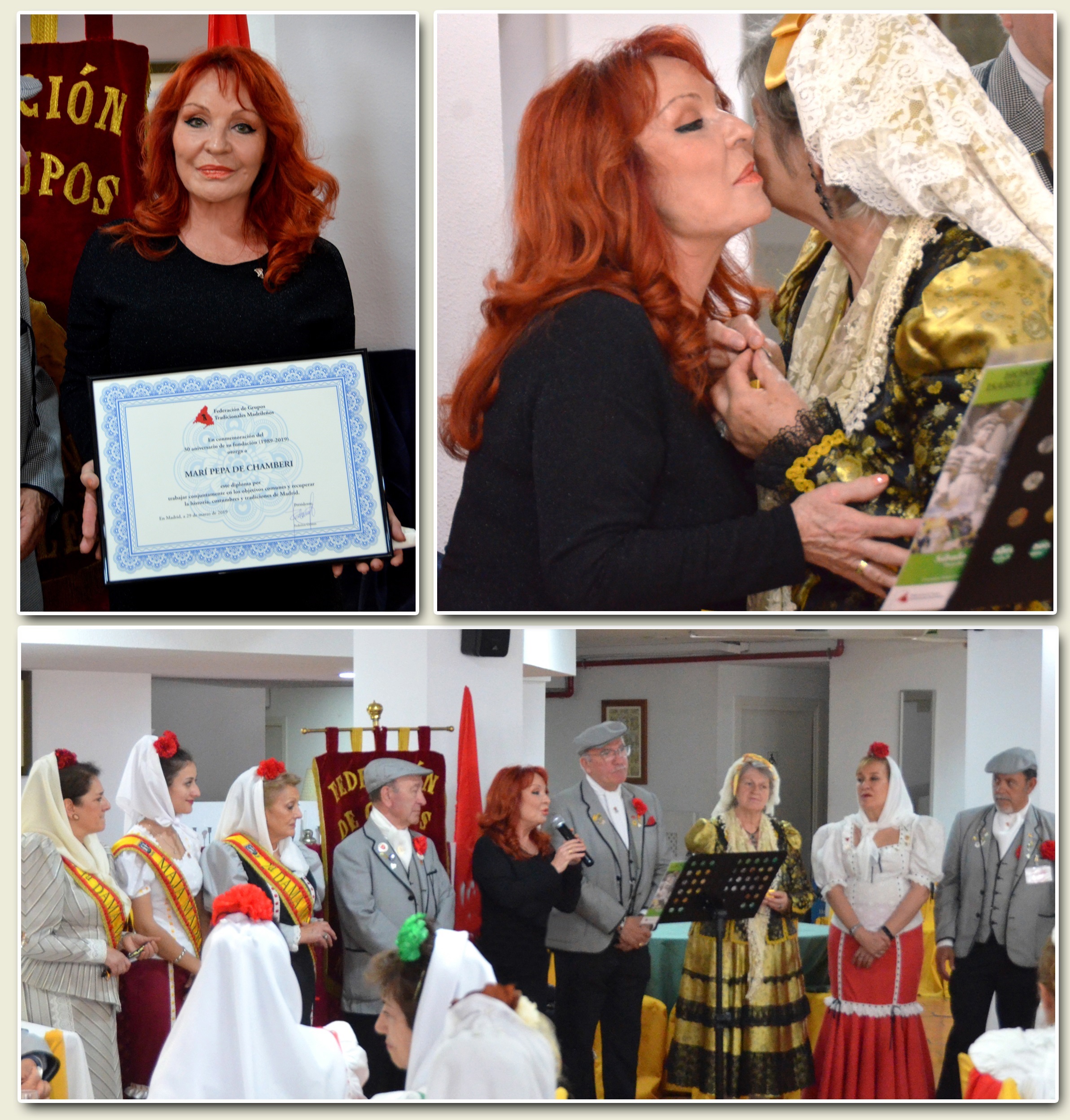 In the show «Homage to our elders», MARI PEPA interpreted the most popular songs of the Madrid songbook, to the rhythm of Chotís, pasodoble, cuplé and other rhythms.

It was an endearing and joyful concert with great success and participation of the attending public. 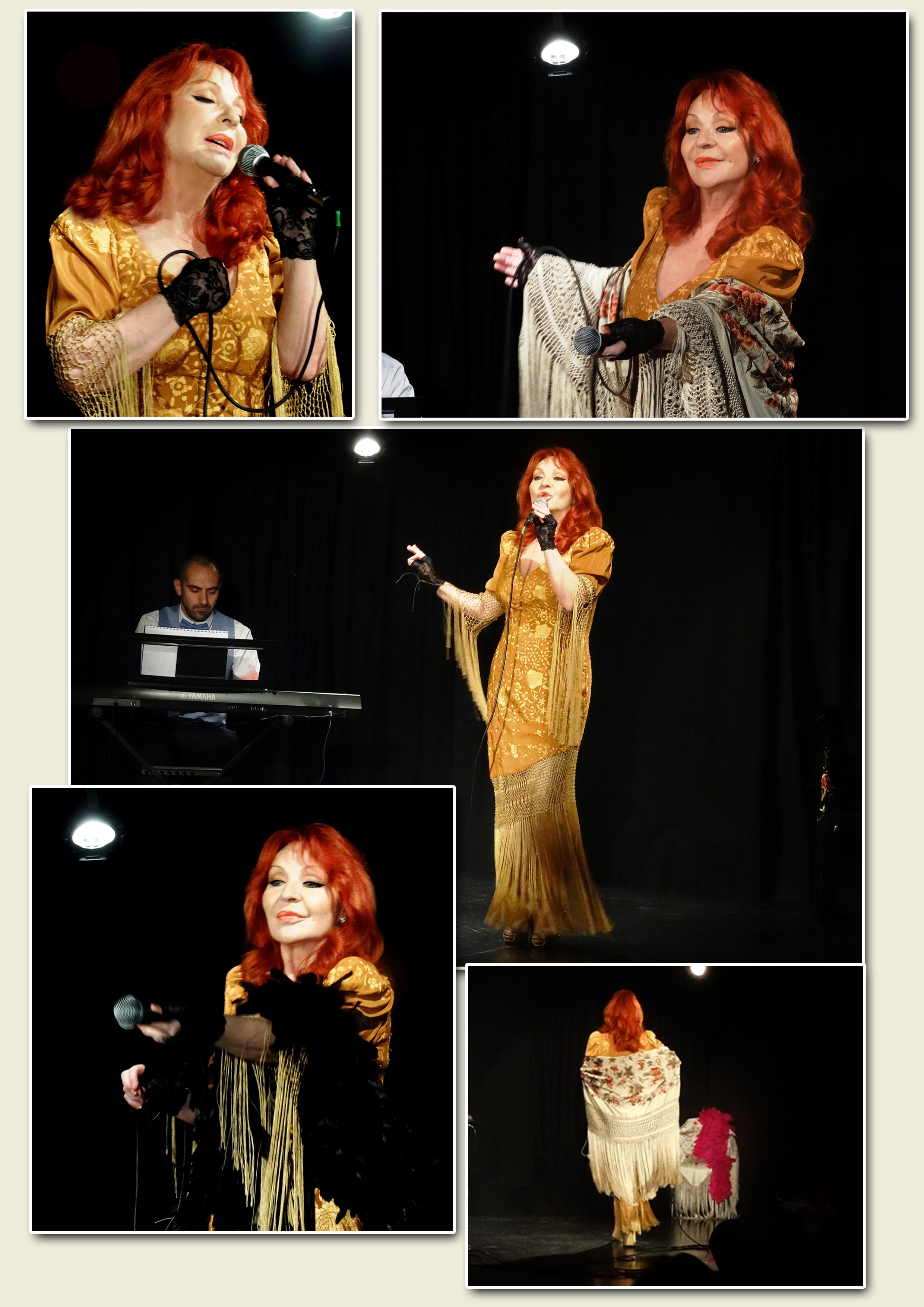 The show «De la Mancha a Hollywood» in the Galileo Galilei hall in Madrid was a success. An intimate night and premieres. Mari Pepa, accompanied to the piano by Isaías Martín, interpreted for the first time songs that remembered the great SARA MONTIEL, and that were very applauded by the public.

The poet Juan Sánchez Alonso offered some words in memory of Sara Montiel.

A great night of homage to a great diva. 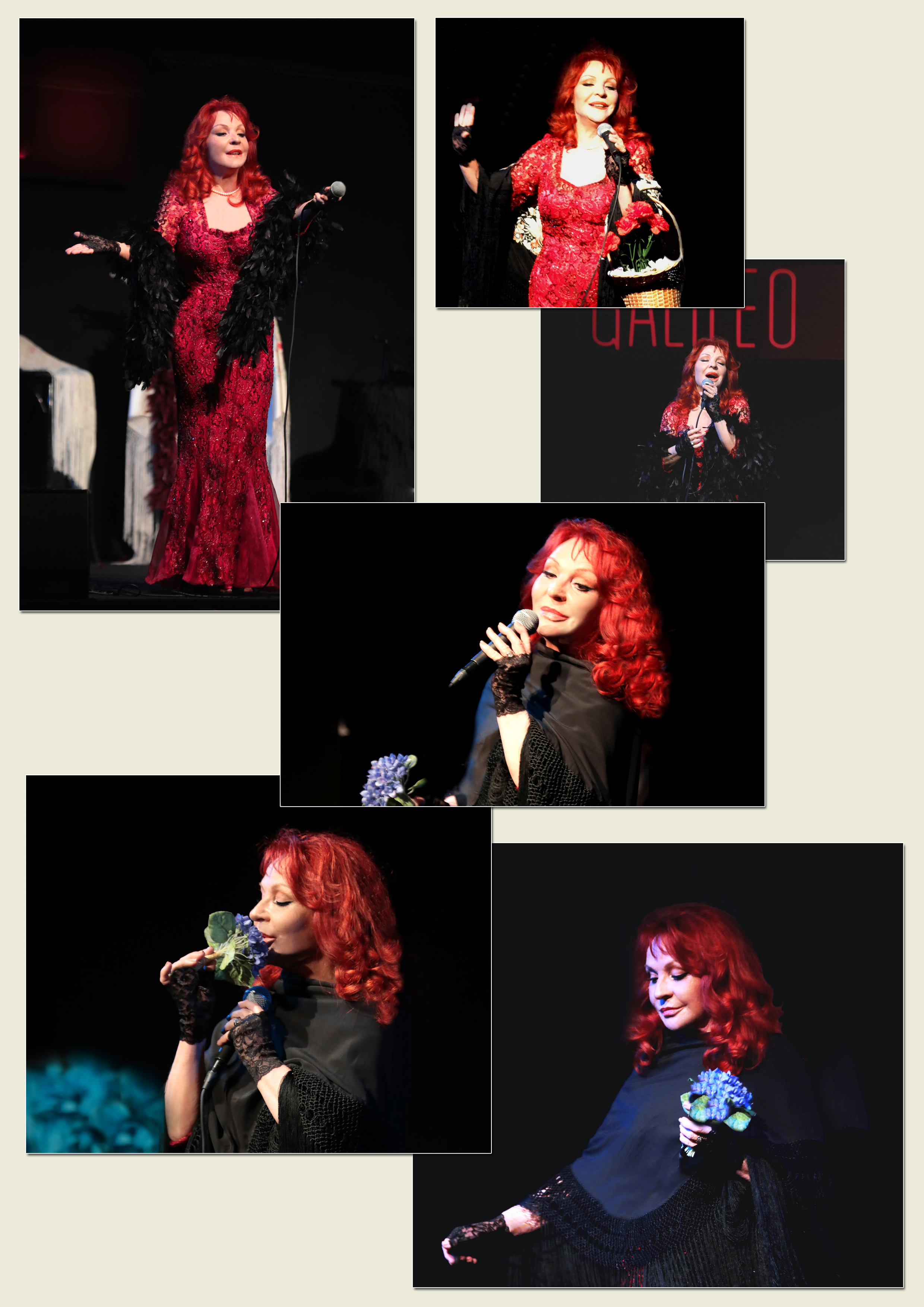 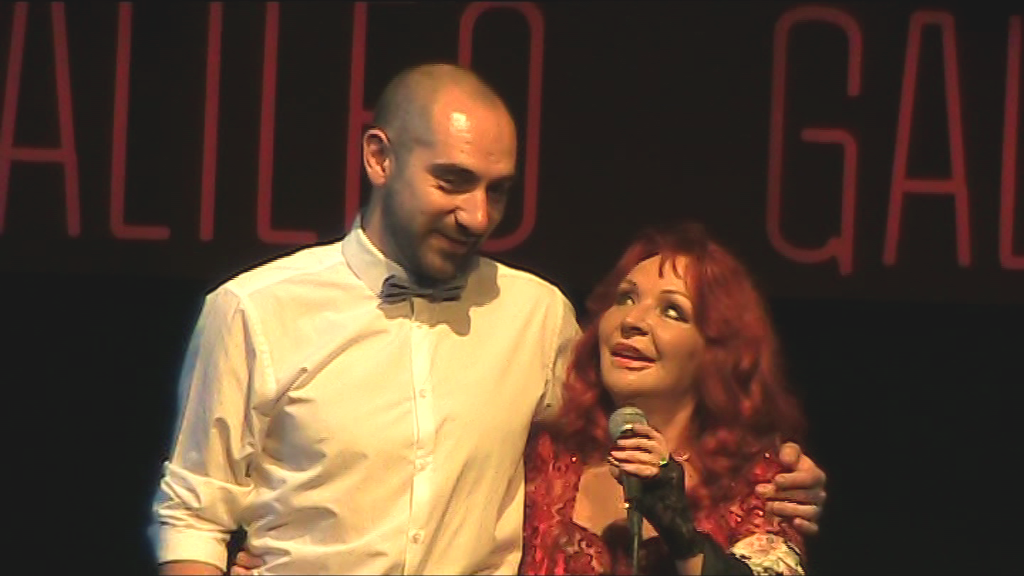 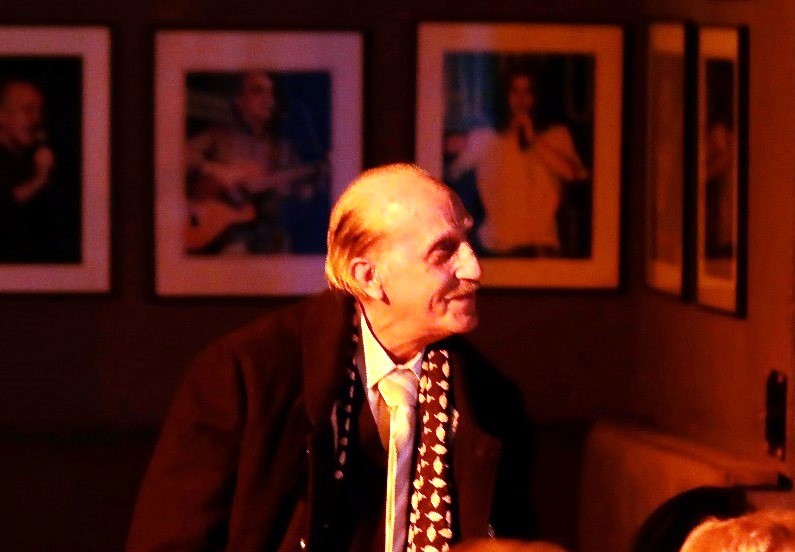 Fantastic gala that was lived in the C. Cultural San Juan Bautista (Madrid).

Meanwhile. Their applause was very extensive and they read the love they felt for the artist. 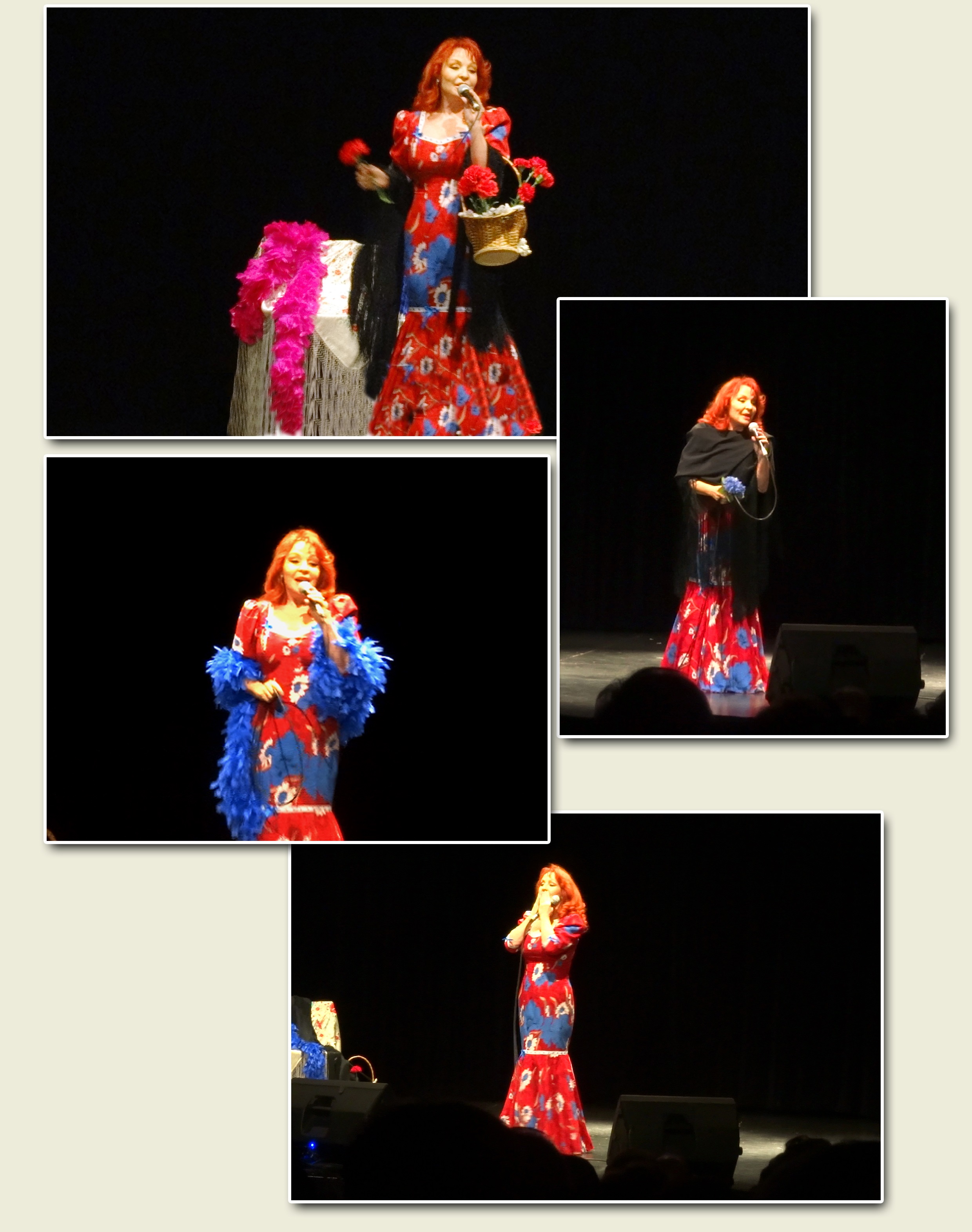 The great assistance and participation of the public, during this concert – honoring, did to Sara Montiel that the spectacle » De la Mancha a Hollywood » was the whole success.

Many plaudits and very much fondness of the public towards Mari Pepa. 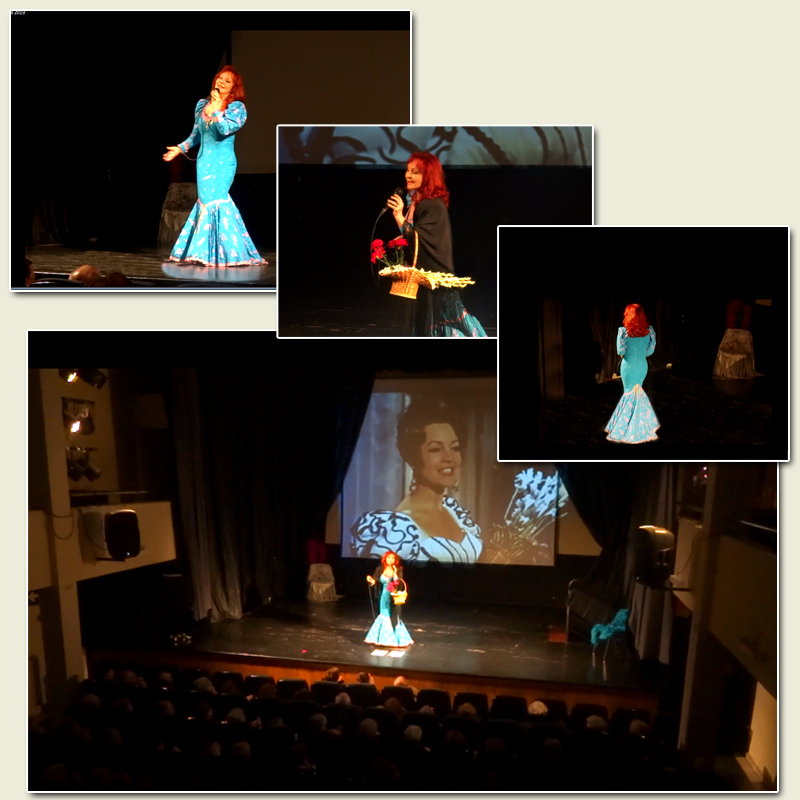